2. U.S. adults regularly turn to a variety of activities to help cope with coronavirus outbreak

The coronavirus outbreak has created unprecedented stress and uncertainty in the lives of many Americans. The survey finds that U.S. adults turn to many different activities on a regular basis to help cope with the pandemic. The vast majority of adults say they watch TV or movies on a daily basis (73%), and a smaller majority (57%) spend time outdoors every day to help make it through the crisis. Fewer say they regularly turn to religious activities like prayer and scripture reading to help them cope, although these activities are more common among certain Christian groups.

The survey also included some questions intended to measure whether U.S. adults are volunteering, making donations or reaching out to offer assistance to friends and neighbors during the pandemic. About four-in-ten U.S. adults say they have offered help to friends or neighbors, while fewer say they have volunteered or donated money to a nonreligious charitable organization (29%) or a religious organization (18%). By comparison, far fewer Americans say they have sought financial help from family, friends or charitable organizations.

To help cope with pandemic, majorities of U.S. adults watch TV or movies and spend time outside every day 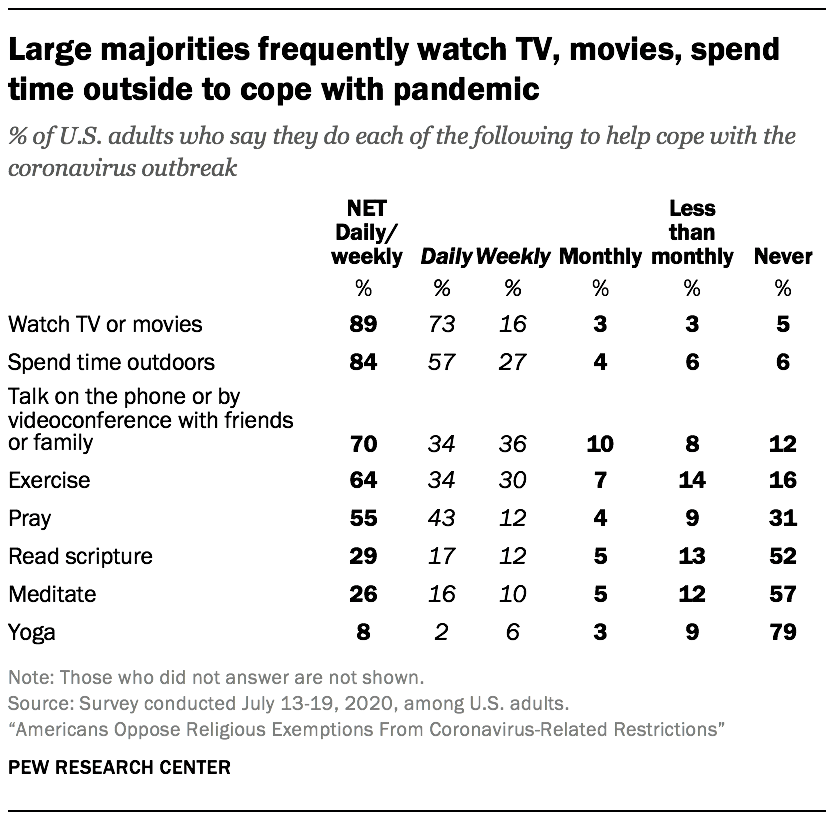 Large segments of the public are regularly watching TV or movies and spending time outside to help cope with the coronavirus outbreak. Nine-in-in-ten U.S. adults say they watch TV or movies at least weekly to cope with the outbreak, including roughly three-quarters (73%) who say they do this daily. And more than eight-in-ten say they spend time outdoors on a daily (57%) or weekly (27%) basis to help get through the pandemic.

Smaller majorities are spending time at least weekly talking on the phone or by videoconference with friends and family (70%) or exercising (64%), with roughly one-third of U.S. adults saying they engage in these activities every day. And 55% of Americans say they pray either daily (43%) or weekly (12%) to help cope with the coronavirus outbreak.

Less common coping activities include reading scripture, meditating and yoga. Three-in-ten U.S. adults say they read scripture at least weekly, and a quarter meditate each week to cope with the pandemic. Smaller numbers are practicing yoga amid the pandemic, with 8% saying they do this at least weekly and about eight-in-ten (79%) saying they never do yoga to help cope with the outbreak.

Many Christian adults pray and read scripture to help with the stresses of the pandemic, although regular prayer is more common than scripture reading across the board. More than eight-in-ten Protestants in the evangelical (83%) and historically Black (88%) traditions say they pray at least weekly, as do smaller majorities of Catholics (66%) and mainline Protestants (65%). Most members of the historically Black Protestant tradition (59%) and evangelicals (57%) say they read scripture at least weekly to help cope with the pandemic, but far fewer mainline Protestants (29%) or Catholics (27%) say this.

U.S. Jews are less likely than Christians to say they pray (36%) or read scripture (20%) at least weekly to help get by during the outbreak.

Fewer than half across religious and demographic groups say they meditate regularly to help cope with the outbreak, although Protestants in the historically Black tradition (and Black Americans more broadly) are more likely than other groups to say they do this.

Across all religious and demographic groups analyzed, majorities say they watch TV or movies, spend time outdoors, talk on the phone or by videoconference with family or friends, and exercise  regularly to help cope with the coronavirus outbreak. 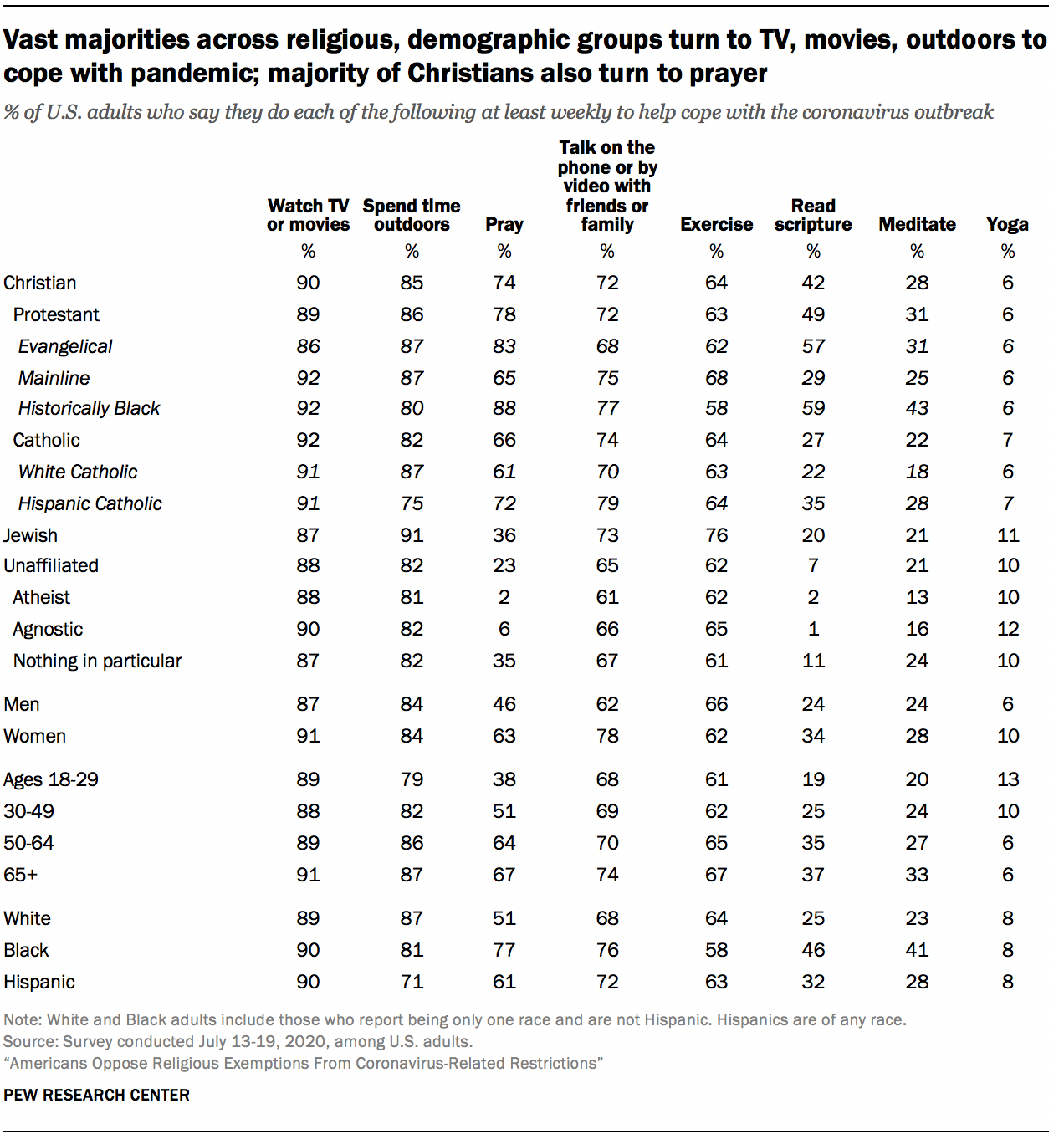 Many U.S. adults have volunteered to help others amid pandemic; fewer say they have asked for help 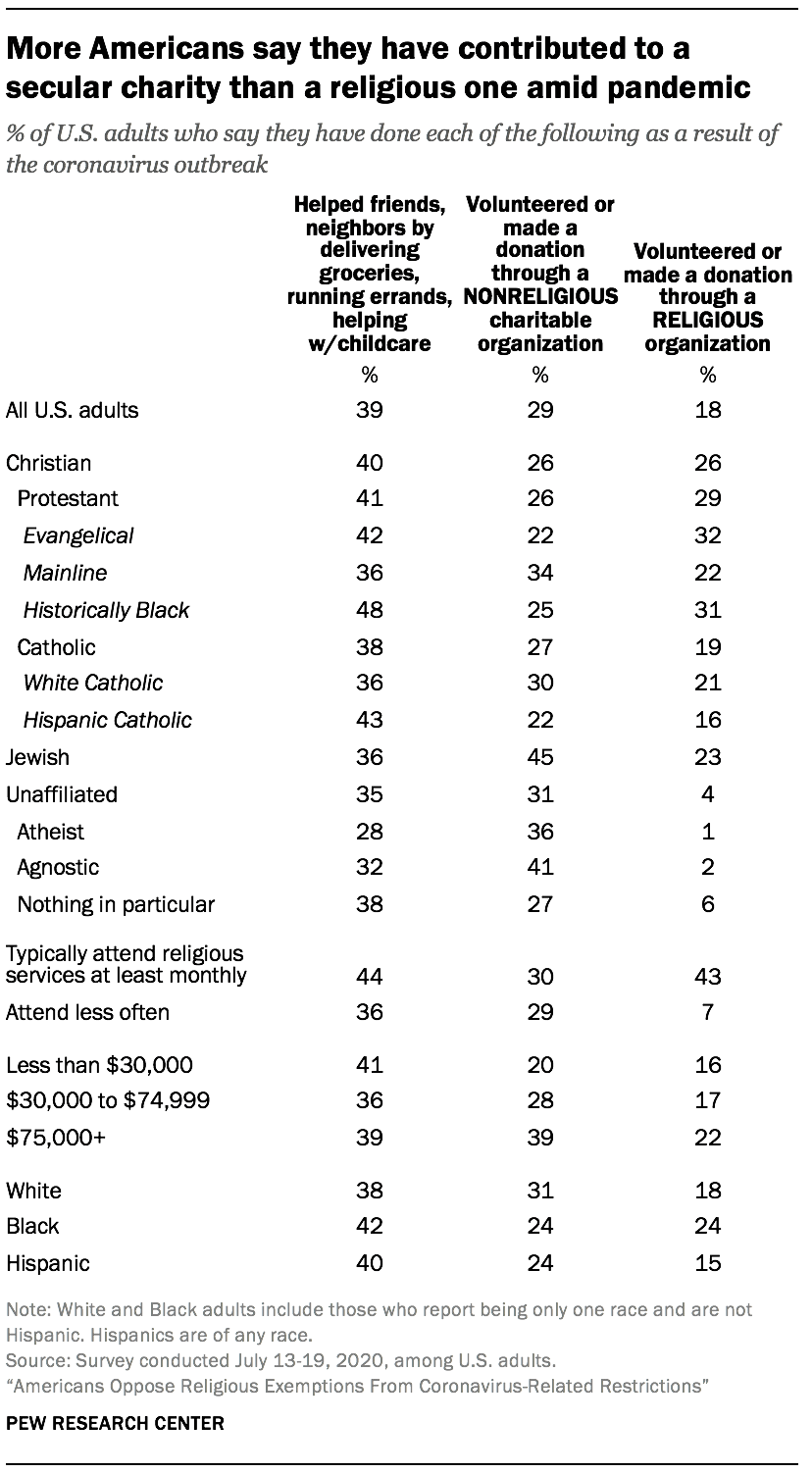 U.S. adults have spent time or money helping others during the pandemic in a variety of ways. Four-in-ten say they have helped friends or neighbors by delivering groceries, running errands or helping with childcare. Three-in-ten report having volunteered or donated money through a nonreligious charitable organization, and 18% have done the same through a religious organization.

Americans who said in a 2019 survey that they typically attend religious services at least once or twice a month are more likely than those who attend less often to say they have helped out friends or neighbors (44% vs. 36%). And not only are these religious attenders about six times more likely to say they have volunteered or made a donation through a religious organization (43% vs. 7%), they are no less likely to have contributed to a secular charity.

While U.S. adults overall are more likely to have volunteered or donated through a secular charity than to have done so through a religious one, Christians are equally likely to have given money or time to religious and nonreligious organizations (26% each). Protestants in the evangelical and historically Black traditions are the only Christian subgroups that are more likely to engage with religious charities (rather than nonreligious ones). Mainline Protestants and Catholics, along with Jews and religiously unaffiliated Americans, all have contributed to secular organizations at higher rates than religious ones. 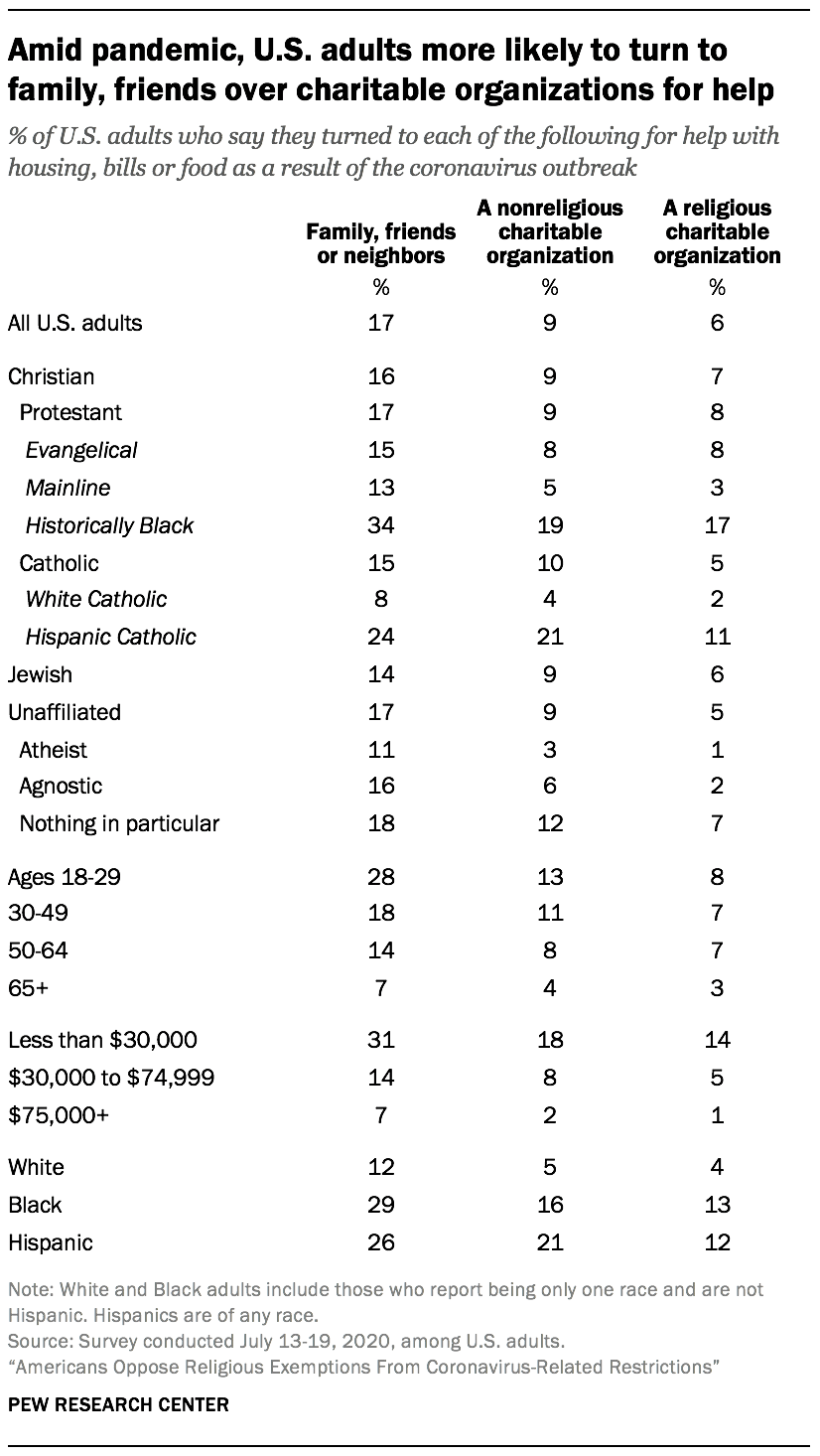 Three-in-ten adults under 30 have turned to family, friends or neighbors for help during the coronavirus outbreak, while fewer adults over 30 say they have done this.

Americans with household incomes of less than $30,000 are more likely than those with higher incomes to say they have gotten help during the pandemic from people they know personally and from both religious and nonreligious charitable organizations. And Black and Hispanic adults are more likely than white adults to say they have turned to all three sources for assistance with housing, bills or food.

Next: 3. Online or in person, many Americans have heard sermons addressing timely political and social events Next Page → ← Prev Page