KnowledgePanel members are recruited through probability sampling methods and include both those with internet access and those who did not have internet access at the time of their recruitment. KnowledgePanel provides internet access for those who do not have it and, if needed, a device to access the internet when they join the panel. KnowledgePanel’s recruitment process was originally based exclusively on a national random-digit dialing (RDD) sampling methodology.  In 2009, Ipsos migrated to an address-based sampling (ABS) recruitment methodology via the U.S. Postal Service’s Delivery Sequence File (DSF). The Delivery Sequence File has been estimated to cover as much as 98% of the population, although some studies suggest that the coverage could be in the low 90% range.40

The panel includes households with landlines and cellular phones, including those with only cellphones, as well as households without phones. Both the RDD and ABS samples were provided by Marketing Systems Group. KnowledgePanel continually recruits new panel members throughout the year to offset people who leave the panel.

Panelists were eligible for participation in this survey if they indicated on an earlier profile survey that they were the parent of a teen ages 13 to 17. A random sample of 4,588 eligible panel members were invited to participate in the study. Responding parents were screened and considered qualified for the study if they reconfirmed that they were the parent of at least one child ages 13 to 17 and granted permission for their child to participate in the study. In households with more than one eligible teen, parents were asked to refer to the child with the next birthday. A survey was considered complete if both the parent and sampled child completed their portions of the questionnaire or if the parent did not qualify during the initial screening.

Of the sampled panelists, 2,176 responded to the invitation and 1,819 qualified and completed both the parent and child portions of the survey, yielding a completion rate of 47% and a qualification rate of 84%.41 The cumulative response rate accounting for nonresponse to the recruitment surveys and attrition is 3.3%. The break-off rate among panelists who logged on to the survey (regardless of whether they completed any items) is 19%. 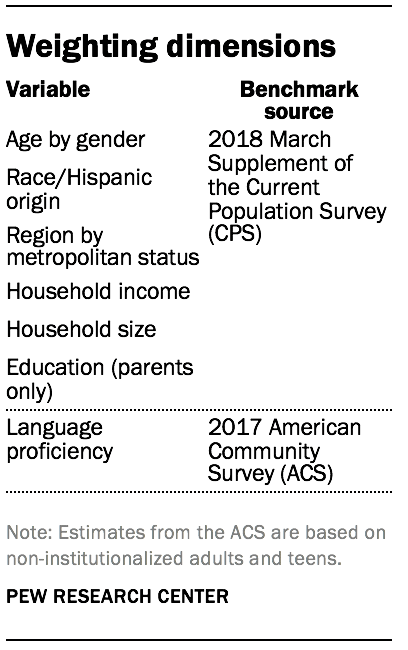 The analysis in this report was performed using separate weights for parents and teens. The parent weight was created in a multistep process that begins with a base design weight for the parent, which was computed to reflect their selection probabilities. Next, an iterative technique was used to align the parent design weights to population benchmarks for parents of teens ages 13 to 17 on the dimensions identified in the accompanying table.

To create the teen weight, an adjustment factor was applied to the final parent weight to reflect each teen’s probability of selection out of all eligible teens in their household. Finally, the teen weights were further raked to match the demographic distribution for all teens ages 13 to 17. The teen weights were adjusted on the same dimensions as parents with the exception of education, which was not used in the teen weighting.

Sampling errors and tests of statistical significance take into account the effect of weighting. Interviews were conducted in both English and Spanish. 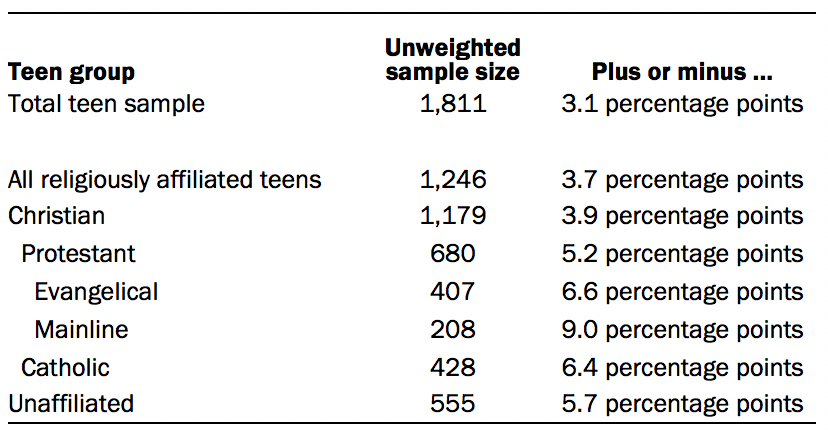 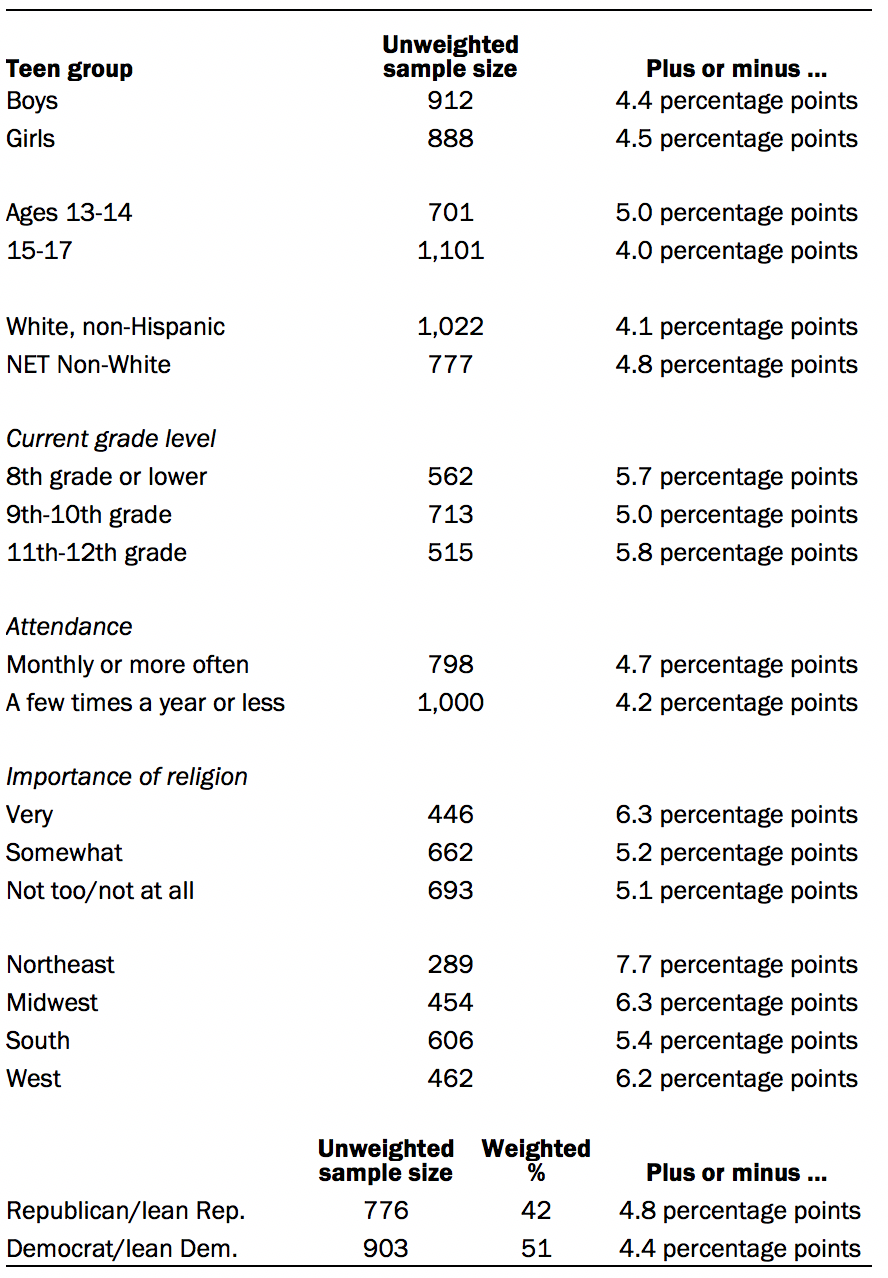 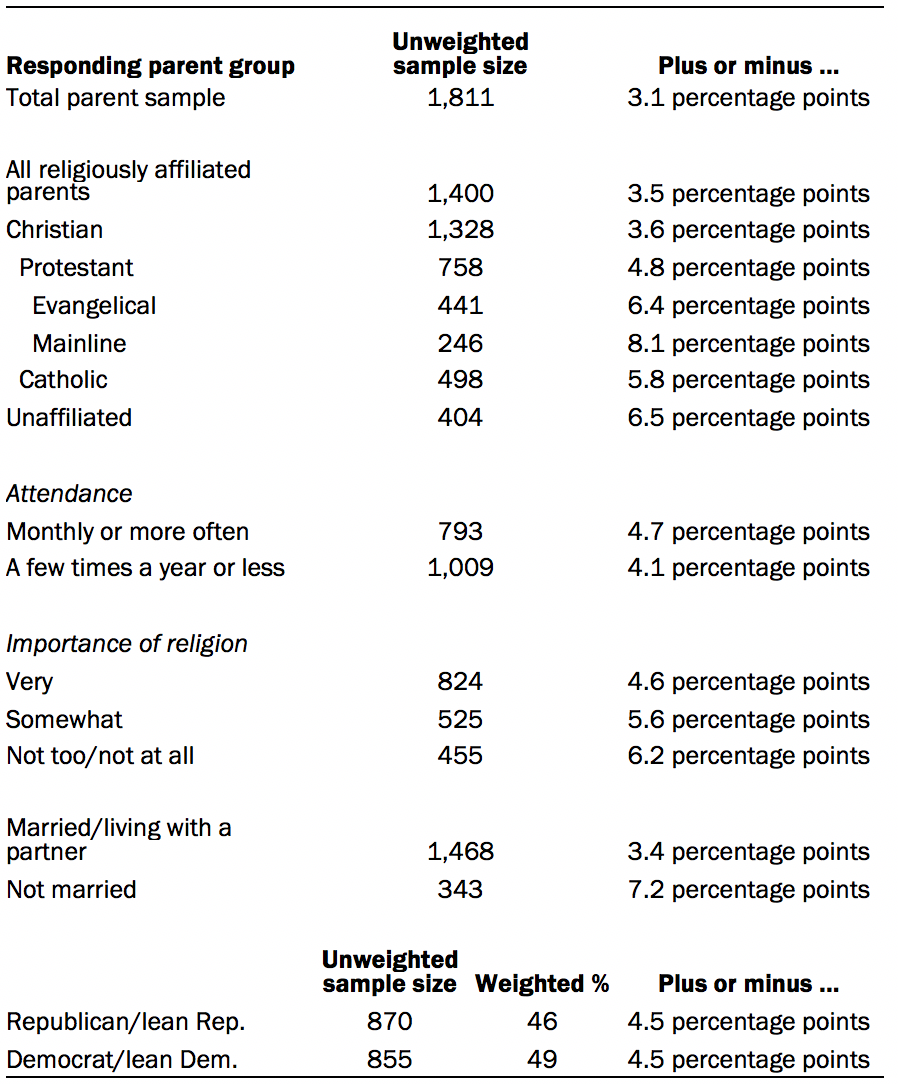