While most U.S. teens identify with a religion, they are modestly less likely than their parents to do so – particularly when it comes to Christianity. The new survey finds that 63% of U.S. teenagers ages 13 to 17 identify as Christian, compared with 72% of the responding parents. Furthermore, teens are more likely than their parents to identify as religious “nones” (32% vs. 24%).14 Among those in both groups, fewer than one-in-ten identify with non-Christian religions, similar to the general public overall.

Broadly speaking, this pattern of religious affiliation among teens is similar across a wide variety of demographic groups, including boys and girls and older and younger teens. Though there is some variety within each subgroup, teens of different ages and genders are more likely to identify as Christian than as unaffiliated.

This broad pattern also holds across race and ethnicity, as well as geographic region, although in these cases there are greater distinctions. White teens are more likely than their non-White counterparts to be religious “nones,” and teens who live in the Western U.S. stand out from Southern teens in the same way.

About a third of U.S. teens identify as religiously unaffiliated, higher than teens’ parents

Among U.S. adolescents ages 13 to 17, roughly six-in-ten (63%) identify with Christianity, including one-in-five (21%) who are evangelical Protestant and a quarter (24%) who describe themselves as Catholic. Smaller shares identify with mainline Protestantism (9%), the historically Black Protestant tradition (6%), or the Church of Jesus Christ of Latter-day Saints (also known as the Mormon church, 3%). And 1% or fewer say they are Orthodox Christians, Jehovah’s Witnesses or members of other Christian faiths.15

In the survey, 4% of American adolescents identify with non-Christian religions, such as Judaism, Islam, Buddhism, Hinduism or others.16

About a third of U.S. teens (32%) say they are religiously unaffiliated, including 6% who describe themselves as atheists, 4% who are agnostics and 23% who say their religion is “nothing in particular.”

While most teens identify as Christians, they do not do so at quite the same levels as their parents. Roughly seven-in-ten parents surveyed (72%) named a Christian religion as their own – including 39% who say they are Protestant and 29% who say they are Catholic – compared with 63% of teens who say the same.

Conversely, American teens are more likely than their parents to identify as religiously unaffiliated. About a third of teens say they are religious “nones,” compared with a quarter of responding parents (24%). The differences are primarily in the share who say their religion is “nothing in particular”: Nearly a quarter of teens say this (23%), while 16% of responding parents do. 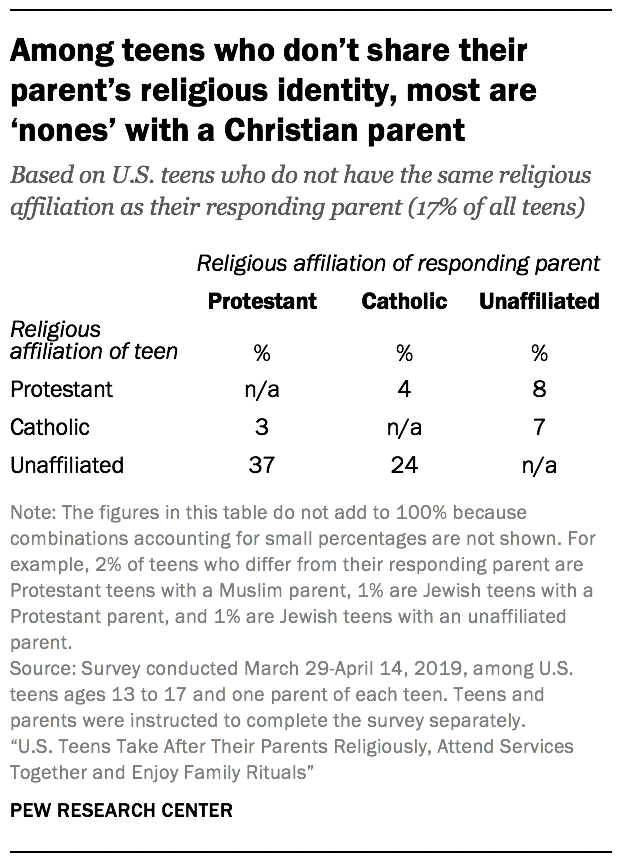 Boys and girls are about equally likely to share their responding parent’s religious identity, and there are virtually no differences across geographic regions. While there does not seem to be much difference between older and younger teens, there are some small gaps when taking a more fine-grained look at grade level. About a quarter of U.S. teens in 11th or 12th grade (23%) have a different religious affiliation than the parent who took the survey before them, somewhat higher than the share of 9th and 10th graders (13%) and those in 8th grade or lower (16%) who say the same. This suggests that, among teens, there may be greater movement away from their family’s religious tradition later in high school.

Among U.S. adults, women tend to be more religious than men, while men are somewhat more likely to identify as religiously unaffiliated. But among U.S. adolescents, there are virtually no differences in religious composition by gender. Among both boys and girls ages 13 to 17 in the United States, nearly two-thirds identify as Christian in some way (64% and 63%, respectively), including roughly a quarter who are Catholic and one-in-five who are evangelical Protestant.

Boys and girls are about equally likely to identify with non-Christian faiths (3% and 5%, respectively). And about a third in each group are religious “nones.”

Religious affiliation among teens across racial and ethnic groups

While this survey includes responses from teens of many different races and ethnicities, it does not include enough responses to analyze most of these groups separately. Instead, when racial and ethnic comparisons are made, the report uses the aggregated category of non-White adolescents – a category that includes teens who identify as Black, Asian, Hispanic, some other race or multiple races.18 (Hispanics are included in the broader non-White category, although the survey does sometimes have the statistical power to look at Hispanic teens separately as well.) 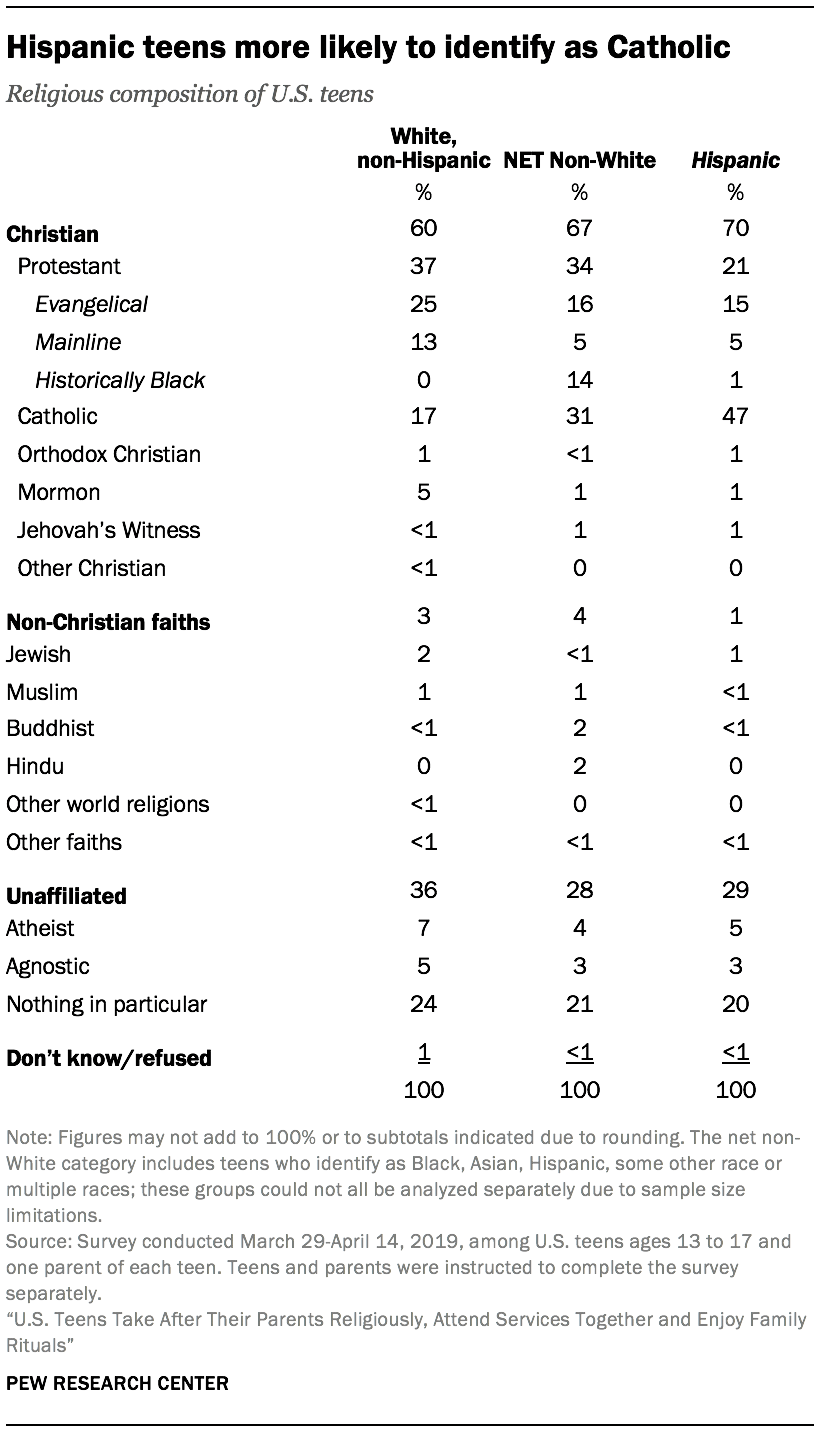 Among White teens, a quarter say they are members of the evangelical Protestant tradition, 17% identify as Catholic and 13% are mainline Protestants. About a third (36%) are religious “nones,” including a quarter (24%) who say their religion is “nothing in particular.”

By comparison, non-White teens are somewhat less likely to be evangelical Protestants (16%), but more likely to be Catholic. Three-in-ten non-White teens (31%) are Catholic – including nearly half (47%) of Hispanic teens. This aligns with findings about Hispanic adults in the U.S., which show that the proportion who identify as Catholic is declining but that roughly half still affiliate with the Catholic Church.

Non-White teens also are less likely than White teens to say that they are religiously unaffiliated (28% vs. 36%). And previous research shows a similar pattern among American adults, with higher shares among those who are White reporting no religious affiliation.19

No major differences in affiliation across age, grade level 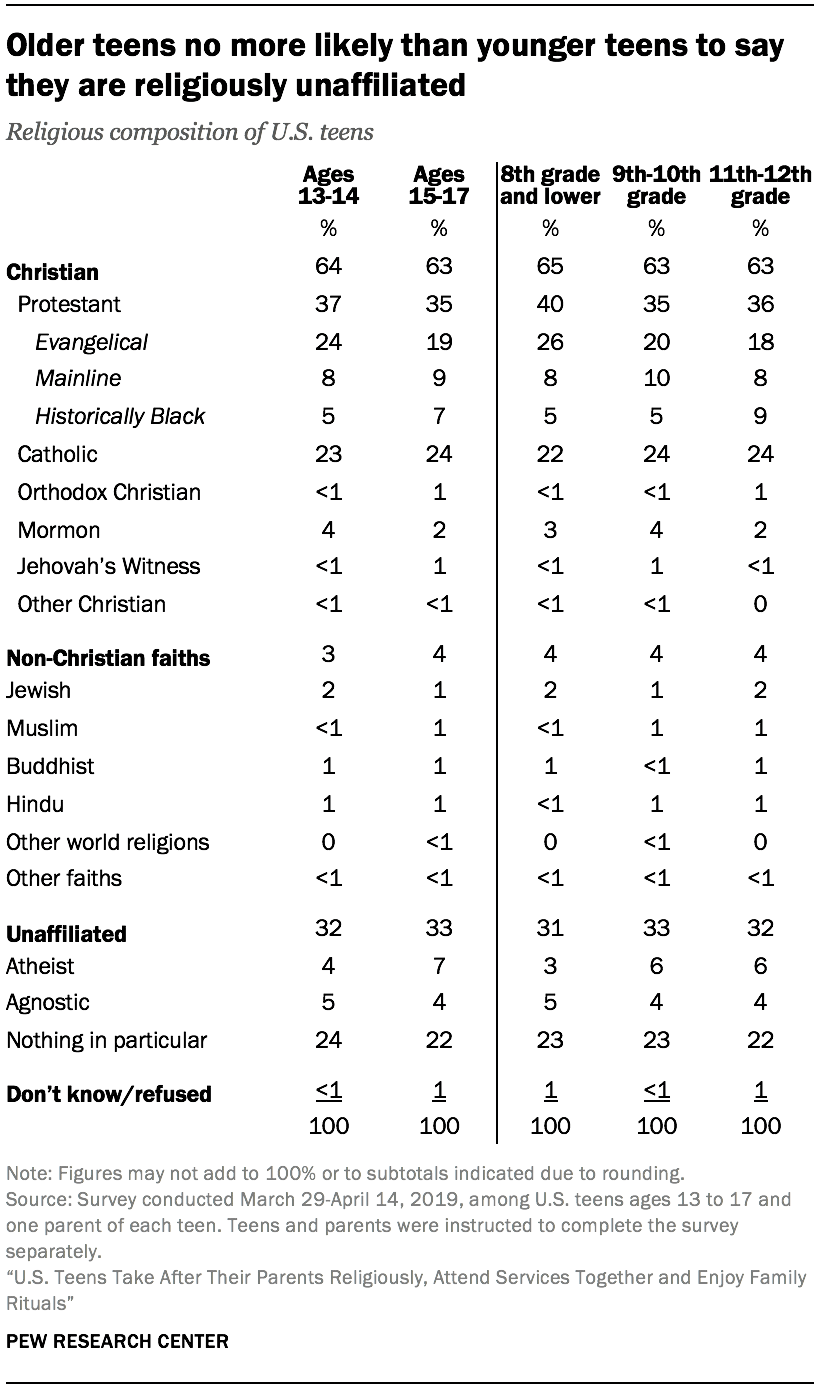 Roughly two-thirds of Midwestern and Southern teens identify as Christian

Compared with other demographics, there is somewhat more variability in the religious composition of adolescents across geographic regions.

The South (29%) and Midwest (23%) stand out for having higher shares of evangelical Protestants than either the Northeast (15%) or the West (11%). And the South also stands out as more likely than the West to be home to teenagers who belong to historically Black Protestant churches (10% vs. 3%). 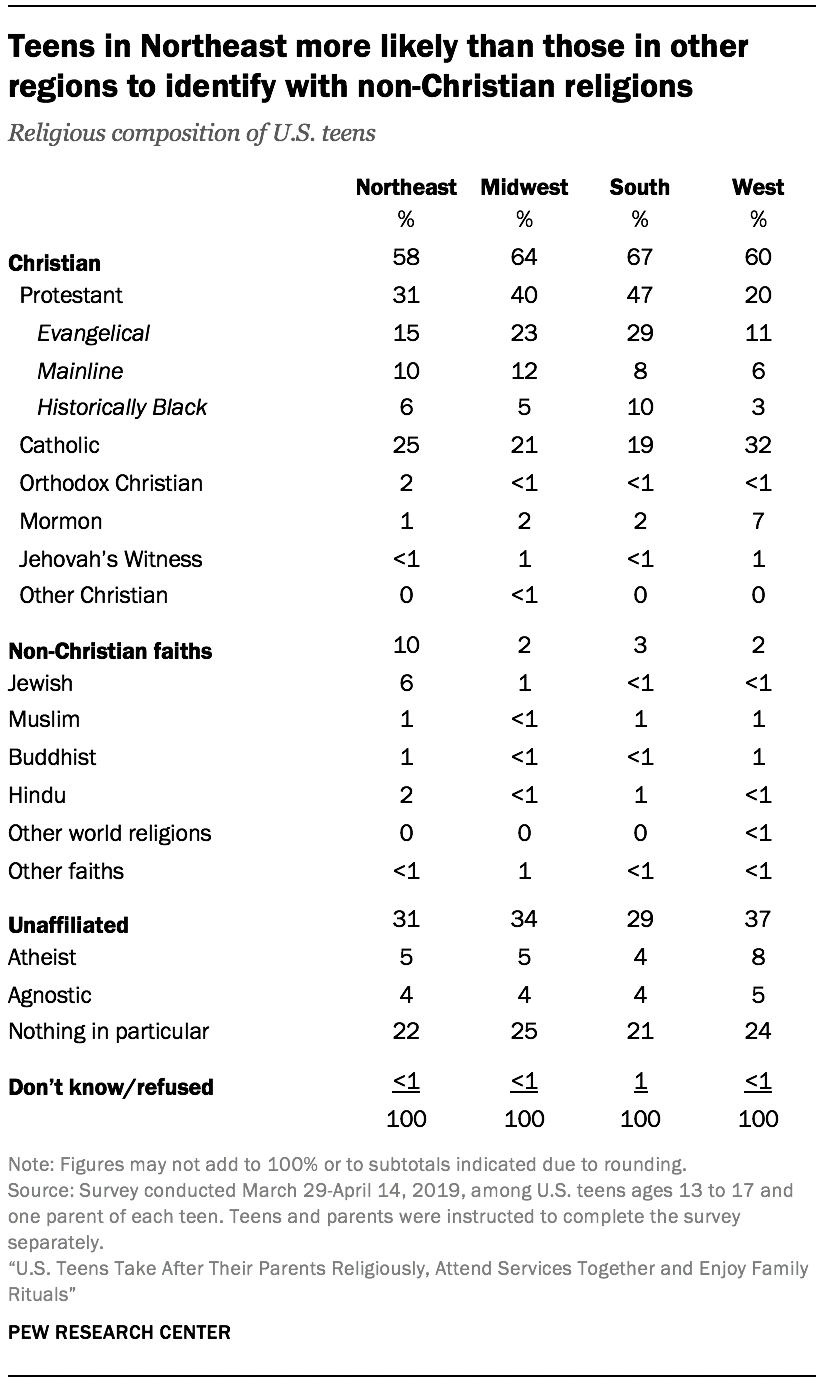 American teenagers who live in the West (32%) are more likely than those in either the Midwest (21%) or the South (19%) to identify as Catholic. A higher share in the West than any other region also are Mormon (7%). Western teens stand out from Southern teens in terms of disaffiliation, too: 37% of teenagers in the West are religious “nones,” compared with 29% in the South.

These patterns are similar to those seen among adults. Specifically, evangelical Protestants and members of historically Black Protestant traditions are disproportionately concentrated in the South, and the West has a relatively high share of “nones.”

Teens in the Northeast stand out as being more likely than those in other regions to identify with non-Christian traditions (10%), including 6% who are Jewish.

Next: 2. Religious beliefs among American adolescents Next Page → ← Prev Page