5. Shared beliefs between parents and teens

With increasing religious diversity in the U.S., interfaith marriages are now relatively commonplace. Their prevalence, however, varies considerably. Mainline Protestant and unaffiliated teens are about three times more likely than evangelical Protestant teens to live in an interfaith home. Although many teens follow their parents’ lead when it comes to religion, this plays out in various ways for teens whose parents differ in their religious identities. Some of these teens say they make their own decisions about what faith (if any) to follow, while others adopt the religion of the parent who is more interested in religion, and still others have parents who choose for them. 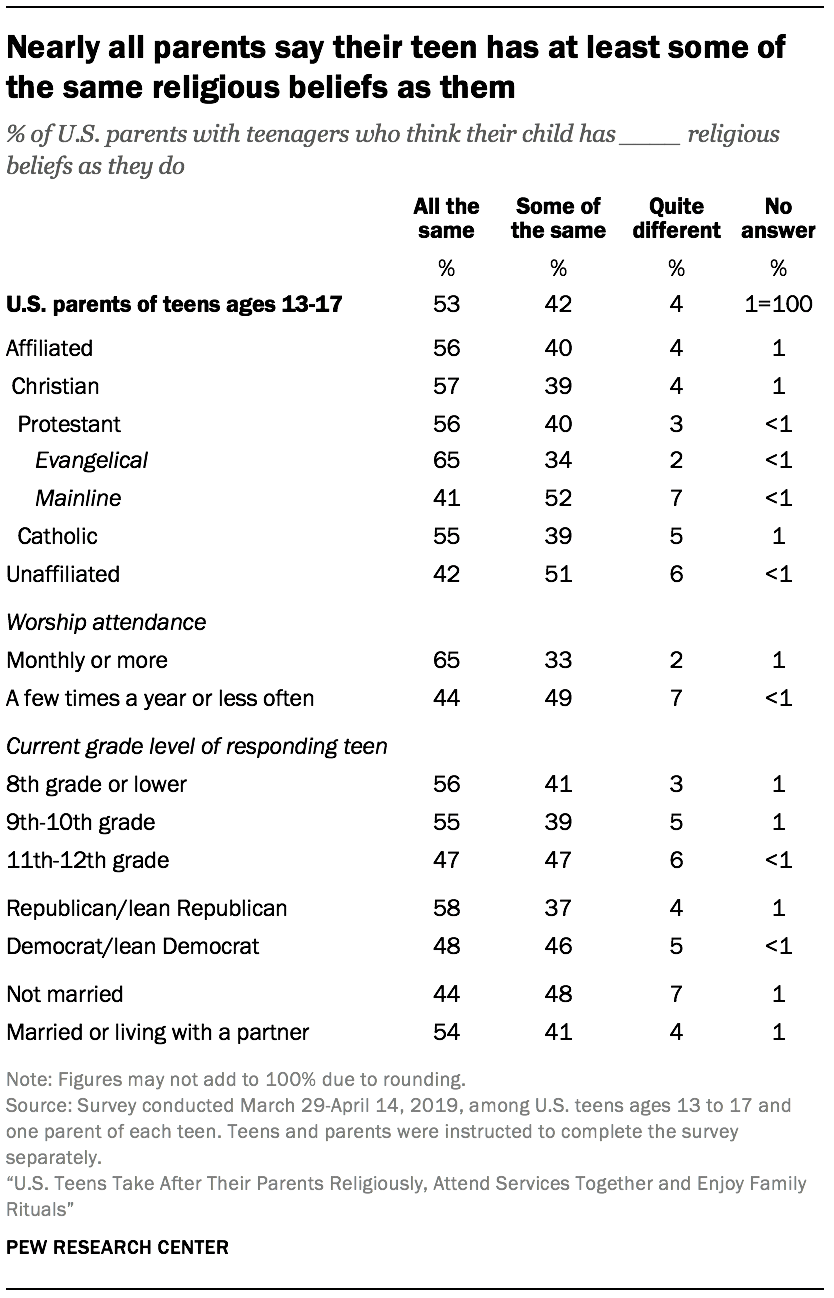 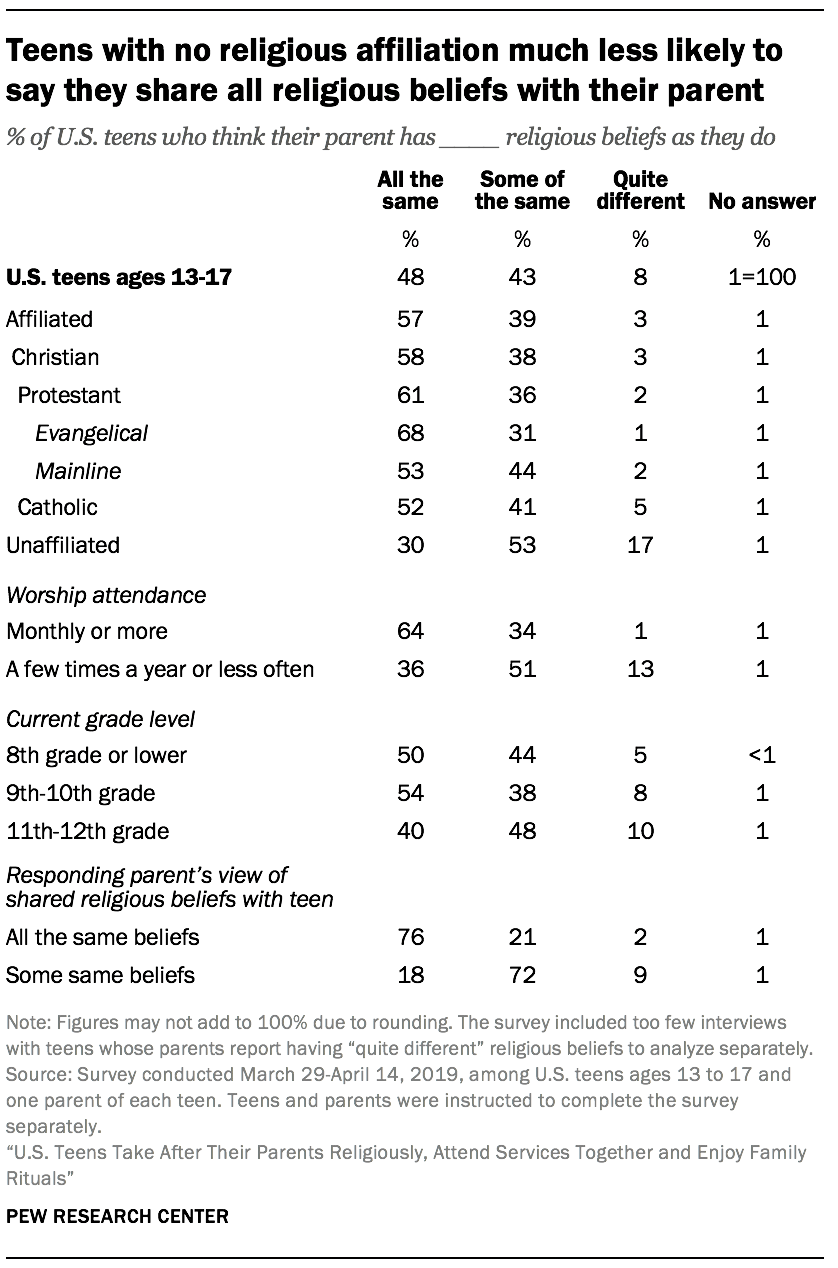 Whether teens think they have all the same religious beliefs as their parent also varies by their own rate of worship service attendance. Teens who say they attend religious services on a regular basis – that is, once or twice a month or more often – are far more likely than those who attend less often to say they and their parent share all the same religious beliefs (64% vs. 36%). Similarly, teens are more likely to report that they have all the same beliefs as their responding parent when they place a higher importance on religion in their life. 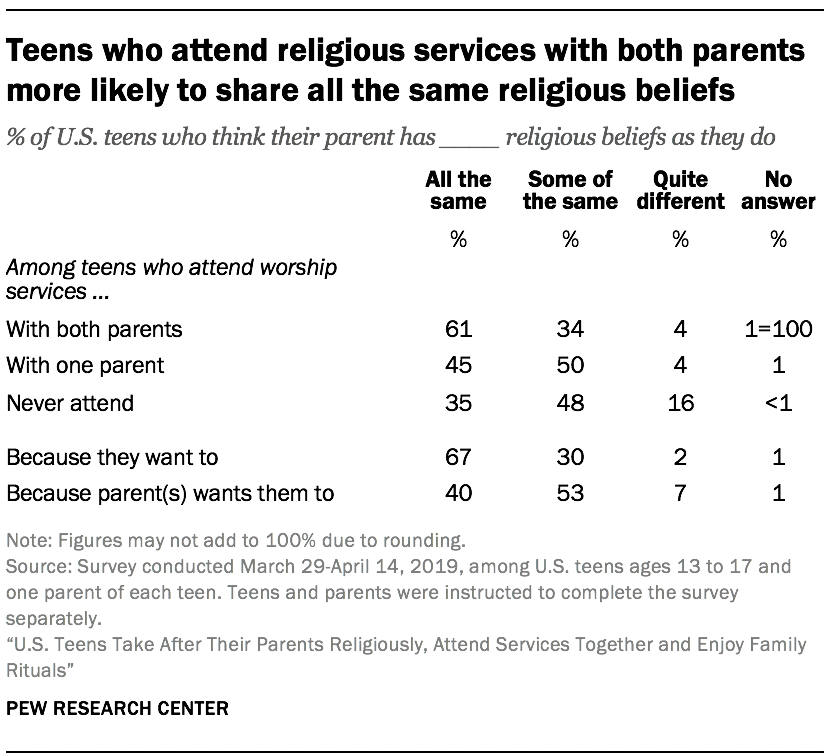 Teens who attend worship services with two parents are relatively likely to say their religious beliefs are all the same as the beliefs of the parent who took the survey before them. Six-in-ten adolescents who attend worship services with both parents say they have all the same religious beliefs as their parent, compared with 45% of those who attend with one parent and 35% of those who do not attend services. Teens who never attend religious services also are more likely than others to say their beliefs are quite different from their parent’s (16%). 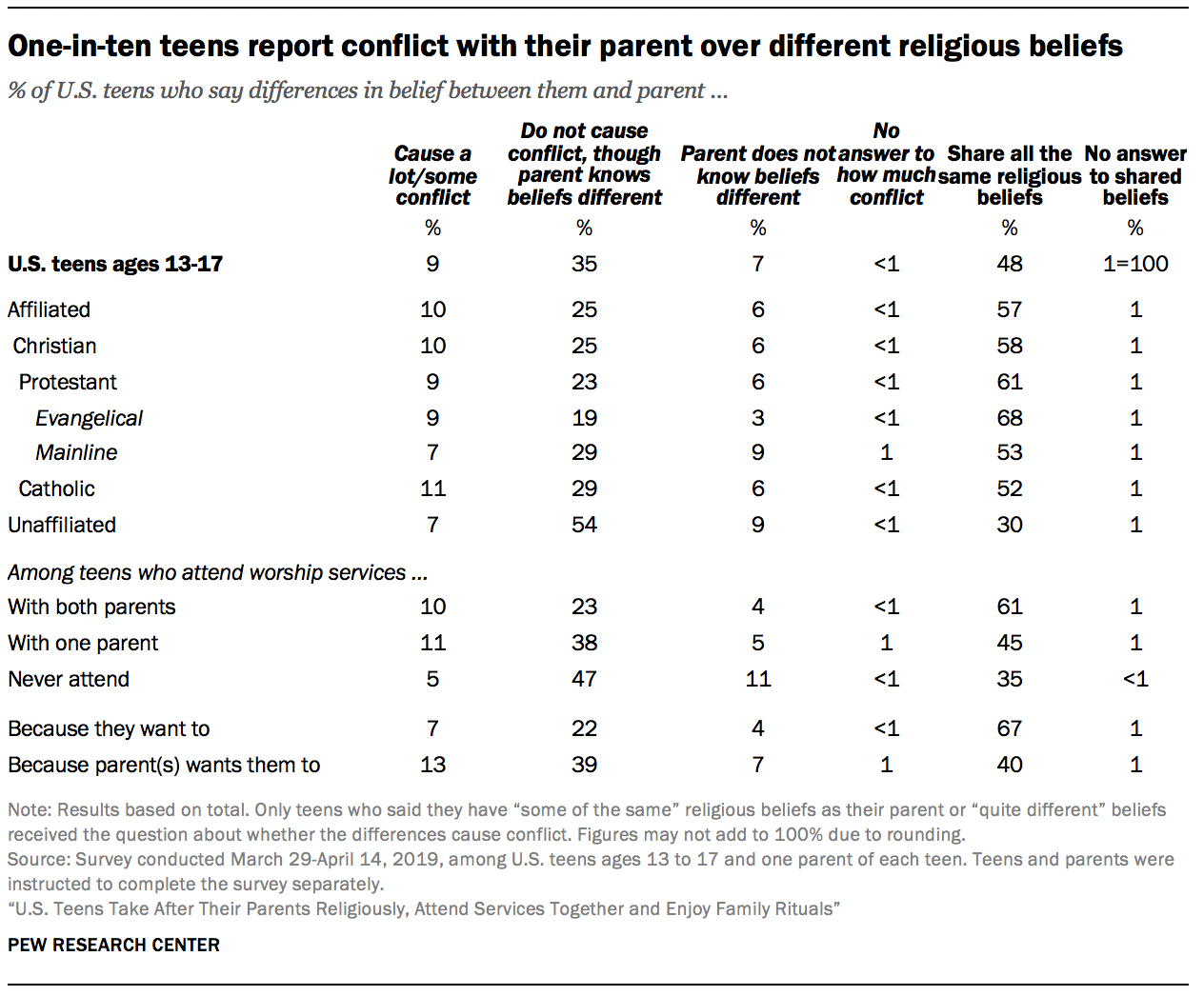 Four-in-ten teens with different religious beliefs from parent say they are less religious, less certain of their beliefs 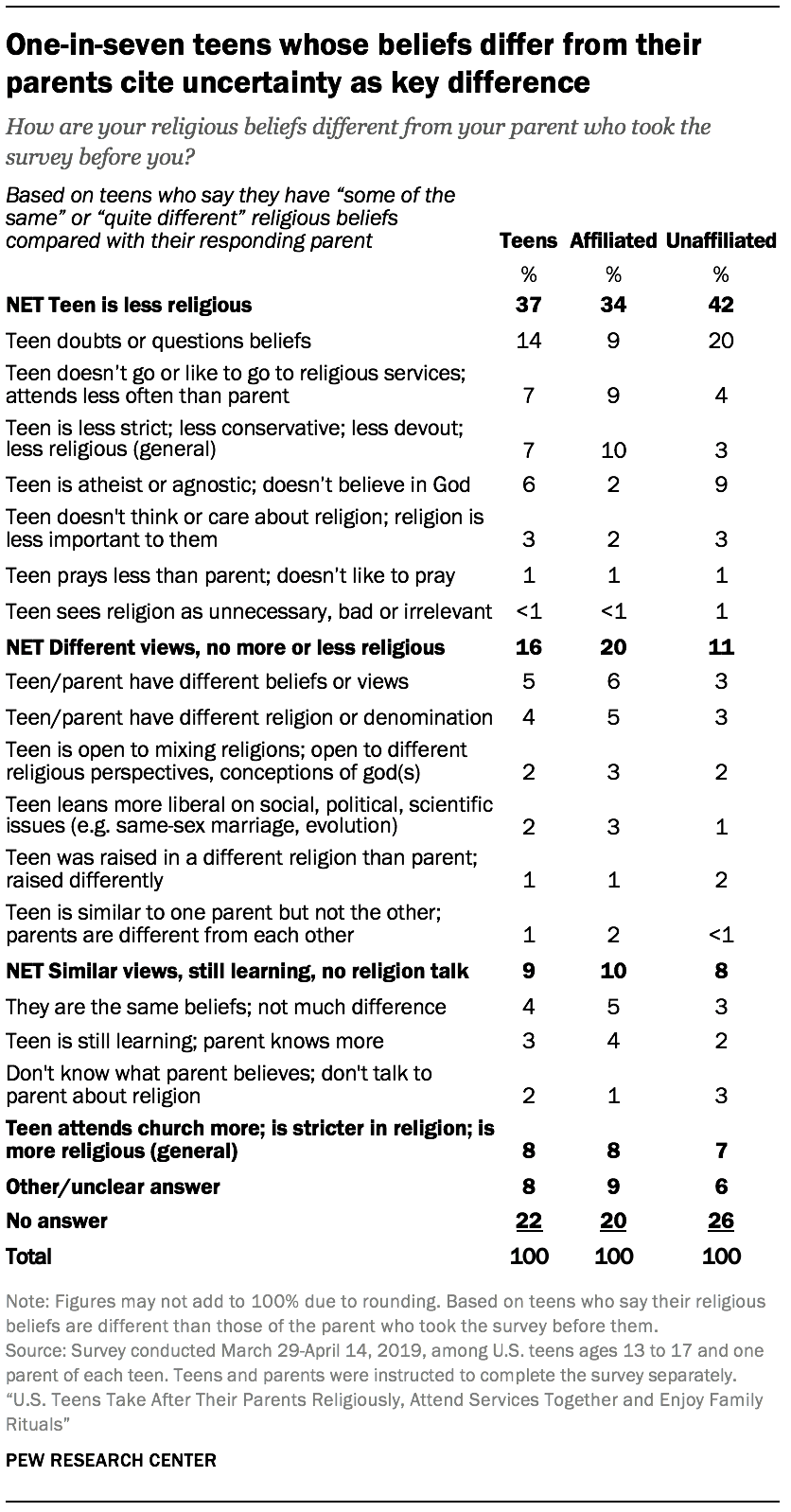 The roughly half of teens who say their religious beliefs are not all the same as their responding parent’s beliefs were asked to explain, in their own words, how their beliefs differ from their parent’s beliefs. Overall, 14% of the teens who got this question say that questioning or being unsure about their beliefs is what makes them different from their parent. Some of these teens discuss general uncertainty, such as one who said, “She definitely believes in a god and I’m not sure.” Others express more specific concerns, such as one teen who said, “Sometimes I just don’t believe in anything. Why does God let people die, or bad things happen to good people?”

An additional 7% of teens who report that their beliefs differ from their parent’s point to a lack of interest in attending church or other worship services as the key difference between them and their parent. Some of these teens say things like, “I don’t like church.” Some give more specific responses, questioning whether worship service attendance is necessary for one to be religious. For instance, one teen notes, “I don’t feel like I needed to go to church to believe in god or be a part of a religion.” Religiously affiliated teens (9%) are somewhat more likely than unaffiliated teens (4%) to focus on worship services as the main difference between them and their parent.

Among teens who say their religious beliefs differ from their parent’s, 6% point to lack of belief in God as a key difference. Some of these teens gave definitive statements like, “I don’t believe in God.” In some cases, they describe conflict between them and their parent(s): “I do not believe in god, and I am forced to go to Sunday School until I am a confirmed Catholic.” Or, “I am not as gullible as my mom and don’t believe in a God. It’s all hogwash.”

Importantly, however, 8% of teens who report having different beliefs from their parent say that they are morereligious than their parent or go to worship services more often than their parent. In some cases, teens point to disagreement over basic beliefs. For example, “I believe that there is a god, and my parent doesn’t.” Or, “I read the bible.” Similarly, one respondent notes, “I believe you go to heaven when you die. My mom doesn’t agree with me.” Others point to differences in religious participation. For instance, one teen – writing about a father – explains: “I go to church and CCD and help at church. He doesn’t go to church.” Finally, others give more general responses, such as: “I would say I’m more religious than my parents.” 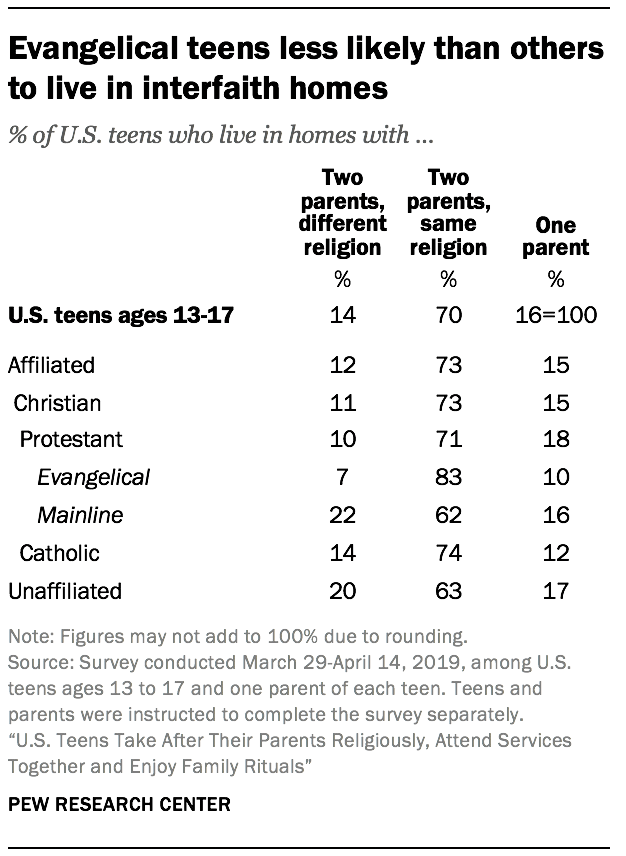 The remainder of this chapter focuses on differences between teens from interfaith homes and those from single-faith homes (see sidebar “Defining interfaith homes” below). The survey finds that seven-in-ten teens live in homes with two parents of same religion (or no religion), 14% in homes with two parents of different religions (including one affiliated parent and one unaffiliated parent), and 16% in single-parent homes.38 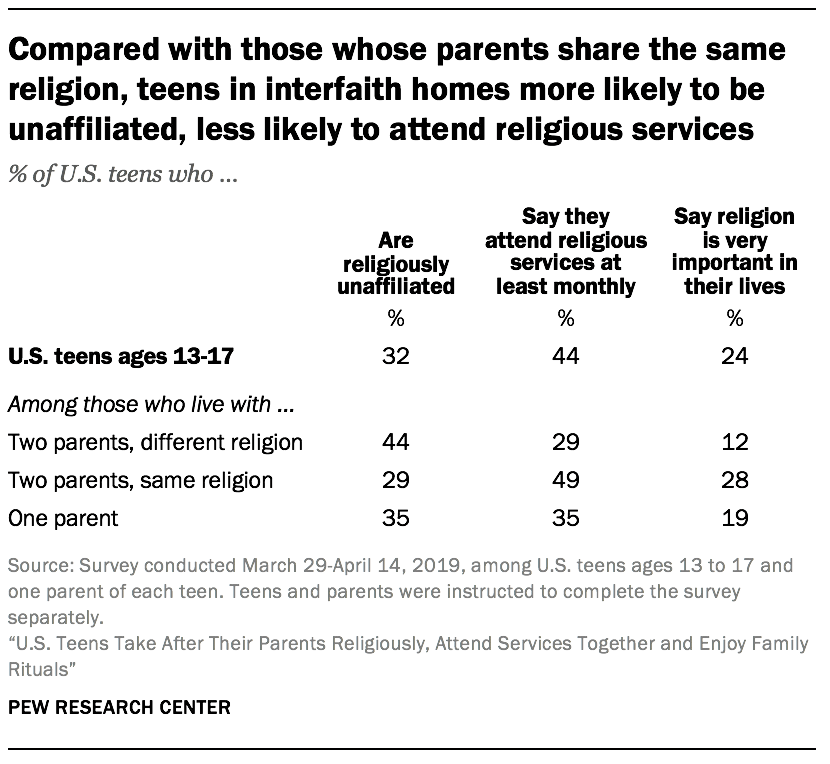 For example, 44% of teens who live in interfaith homes are religiously unaffiliated, compared with 29% in homes where two parents share a religion. Teens in interfaith homes also are less likely than those in homes where two parents share the same religion to attend religious services at least monthly and say religion is very important in their lives.

(Differences between those in religiously mixed households and those in single-parent households are not statistically significant.)

What does it mean to say an adolescent lives in an interfaith home or that they have interfaith parents? There are a variety of potential ways to define interfaith families. Is interfaith a subjective concept, based on whether members of a family view their religious beliefs and identities as different from one another? Or is it more objective, reflecting differences in family members’ formal religious affiliations? Do couples who belong to different sects or denominations of the same world religion (Christianity, for example) count as interfaith couples? Are a Catholic and a Baptist an interfaith couple, or a Methodist and a Presbyterian? Also, is it about the adults that live in an adolescent’s home, or is it about an adolescent’s biological parents, regardless of who they live with? What about if two parents have the same religious affiliation, but the adolescent is different – does that count? There is no single, correct answer to these questions.

This report focuses on the adults whom teens live with and defines interfaith homes in an objective manner based on the information provided by the responding parent. Each responding parent provided detailed information about their own religious affiliation and, if they are married or cohabiting with a partner, about their spouse or partner’s religious affiliation. These religious affiliations were grouped into the following traditions: Protestant, Catholic, Mormon, Orthodox Christian, Jehovah’s Witness, other Christian, Jewish, Muslim, Buddhist, Hindu, other world religion, other faith and unaffiliated. If the responding parent and their spouse or cohabiting partner are affiliated with different traditions, they are considered interfaith. Given these categories, a Methodist and a Presbyterian (or any other combinations of Protestant denominations) would not be considered interfaith, but a Catholic and a Protestant would be. Importantly, this measure of interfaith focuses on an adolescent’s home, not on their biological parents. And it does not define differences in belief or religious worldviews between parents as interfaith, only their religious affiliations. It also does not consider a house where a parent and teen have different religious affiliations to be an interfaith home, because the analysis seeks to explore the environment in which a teen lives and the connection that may have with the teen’s own religious identity, beliefs and practices.

When parents’ religions differ, teens give variety of responses about how they choose which one to follow 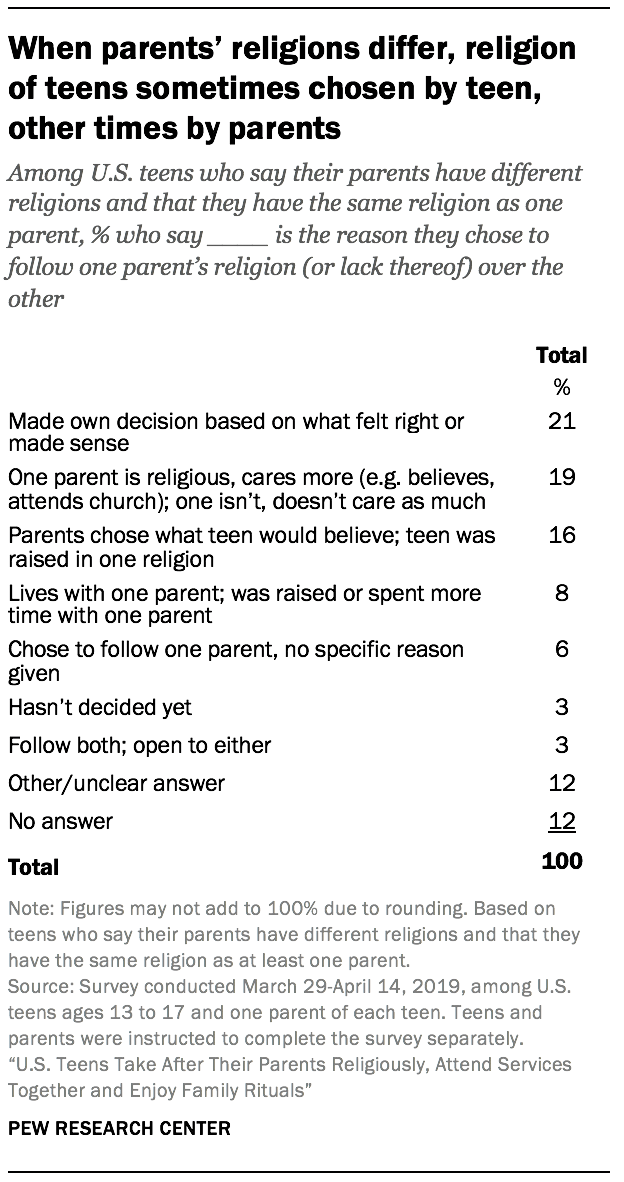 Roughly one-in-five teens (21%) say they made their own decision based on what felt right to them or what made the most sense. Some give general responses such as, “I just chose myself,” or “I followed what I felt was best for me.” Others provide more context. For example, “I went to church with my mother, who is Baptist and I went to church with my father, who is Catholic and from there I decided.”

A similar share (19%) say that one of their parents is more religious than the other, or that one parent cares more about religion than the other, which influenced their choice. For instance, “My dad takes me to church regularly, whereas my mom doesn’t do much of anything,” or “My dad doesn’t have one so I followed my mom’s.”

Another 16% of teens whose parents have different religions made it clear that their parent chose for them, or that they were primarily raised in the religion of one of their parents. For instance, “I was baptized as a Catholic and this was agreed upon by both of my parents so it was a mutual decision between my parents.” Similarly, “it’s what [I] was born and raised with.” This is often framed as being out of the teen’s control. Other typical responses include variations on the teen’s mother making the choice. And in some cases, teens acknowledge their lack of commitment with the religion that was chosen for them. For example, “I am Catholic because my mother makes me but I am not interested in any religion.”

Of course, families change. Another common set of responses, accounting for 8% of teens who say their parents have different religions, reflect the changing circumstances in some families by pointing to the fact that some teens were primarily raised by one of their interfaith parents. For example, “I’ve lived with my Mom my whole life, so I follow her faith.” Similarly, “my mom raised me before marrying my stepfather.”

A previous Pew Research Center study that analyzed how adult respondents were raised religiously found that mothers tend to be seen as more responsible for religious upbringing when parents have different religions, and that those from mixed religious backgrounds are more likely to adopt their mother’s religion as their own.

Next: 6. What do parents want for their teens? Next Page → ← Prev Page