The new survey finds that although the majority of teens pray and attend worship services at least occasionally, about four-in-ten say they seldom or never attend services, and a similar proportion report seldom or never praying.

The survey also allows for comparisons between teens and their parents who took the survey before them, finding that teens are about as likely as their responding parents to regularly attend services – but less likely to engage in regular prayer.22 Teens’ rates of attendance and prayer also are tied to their parents’ religious practices. For example, teens whose responding parent regularly attends religious services are more likely than their counterparts to attend services and to pray frequently.

Of course, religious practices extend beyond worship service attendance and prayer. For instance, half of teens have been in a religious youth group and six-in-ten have participated in religious education at some point in their lives. These activities vary considerably across Christian subgroups, and the likelihood of participating in them declines as adolescents age.

In addition, a majority of U.S. adolescents report at least occasionally having religious or spiritual experiences, such as feeling a deep sense of spiritual peace and well-being or a strong sense of gratitude or thankfulness. Religiously unaffiliated adolescents are somewhat less likely to report such experiences. 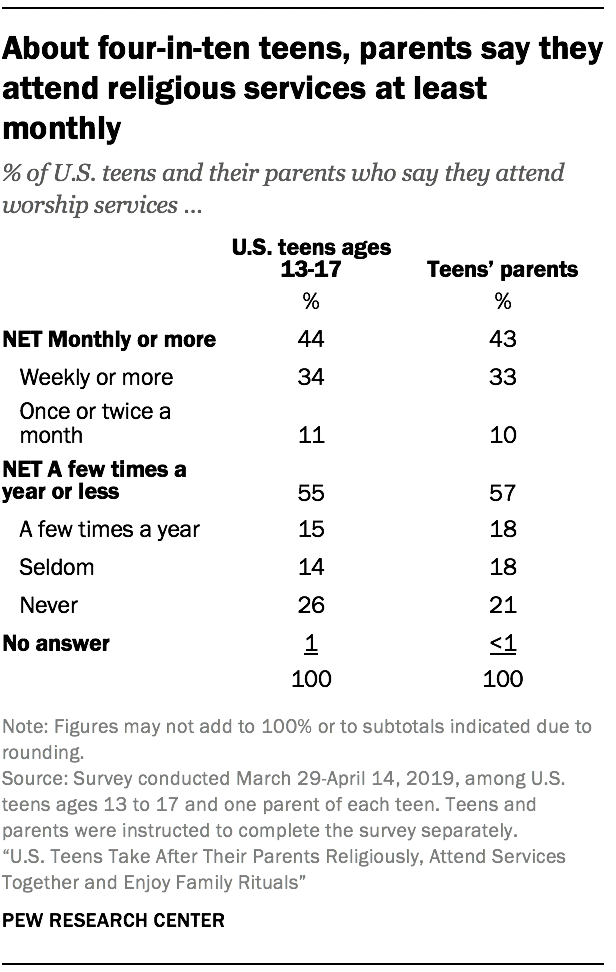 There are few differences in attendance patterns between American teenagers and their responding parents in the survey. But that does not mean that teens always give the same response as the parent who took the survey before them to the question about worship attendance.

About a third of U.S. teens (32%) report attending religious services with a frequency that differs from their parent. For example, a teen might say they never attend religious services, while their parent reports going a few times a year.24 Among those in this group, most of these combinations (57%) involve a teen who attends less often than their parent, including a substantial number of cases (25%) in which the teens say they never attend services, while the parents say they go at least on occasion. At the same time, 14% are teens who say they attend weekly or more often, though they have a parent who reports attending less frequently.

There also are distinct differences by religious tradition in how often teens participate in worship services. Evangelical Protestant teens are far more likely than their mainline or Catholic peers to say they attend church once a week or more often; about two-thirds of evangelicals say they attend this often, compared with four-in-ten each among mainline Protestants and Catholics. By comparison, the vast majority of religiously unaffiliated teens (81%) say they seldom or never attend religious services.

Teens appear to attend religious services somewhat less frequently as they advance through school. About four-in-ten teenagers who are still in eighth grade (or below) say they go to services weekly, compared with three-in-ten who are juniors or seniors in high school.

Parents’ political party and marital status also are linked with differences in how often teens go to religious services. Adolescents with a Republican parent are particularly likely to attend religious services: Fully 43% of adolescents with a Republican or Republican-leaning parent attend services weekly, compared with a quarter of teens with a Democratic or Democratic-leaning parent. And while one-in-five teens whose responding parent is not married (including those who have never been married, as well as those who are divorced, separated or widowed) say they attend weekly, a much larger share of those whose responding parent is married or living with a partner (36%) say they attend with the same frequency. 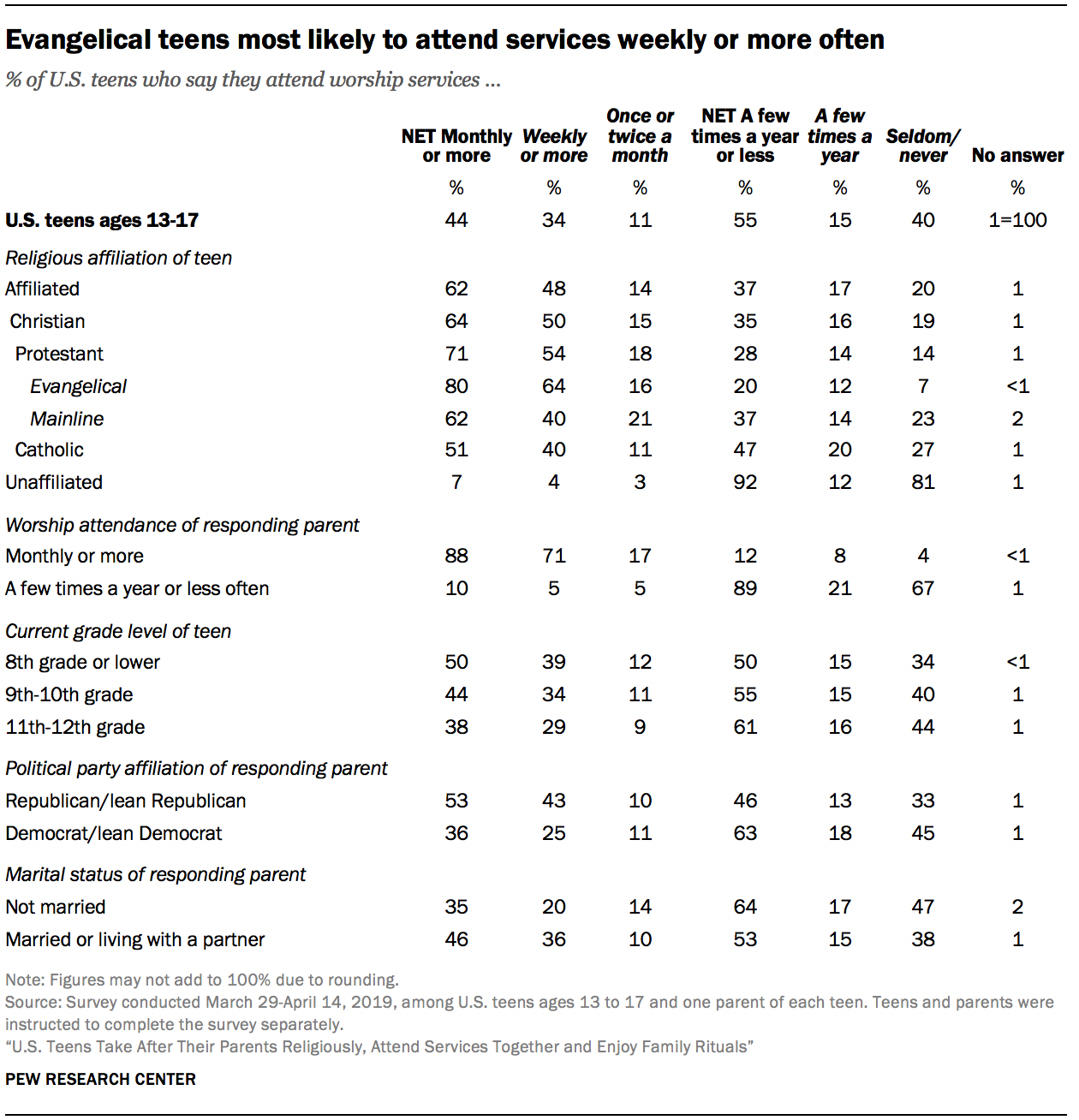 Why do teens attend worship services? 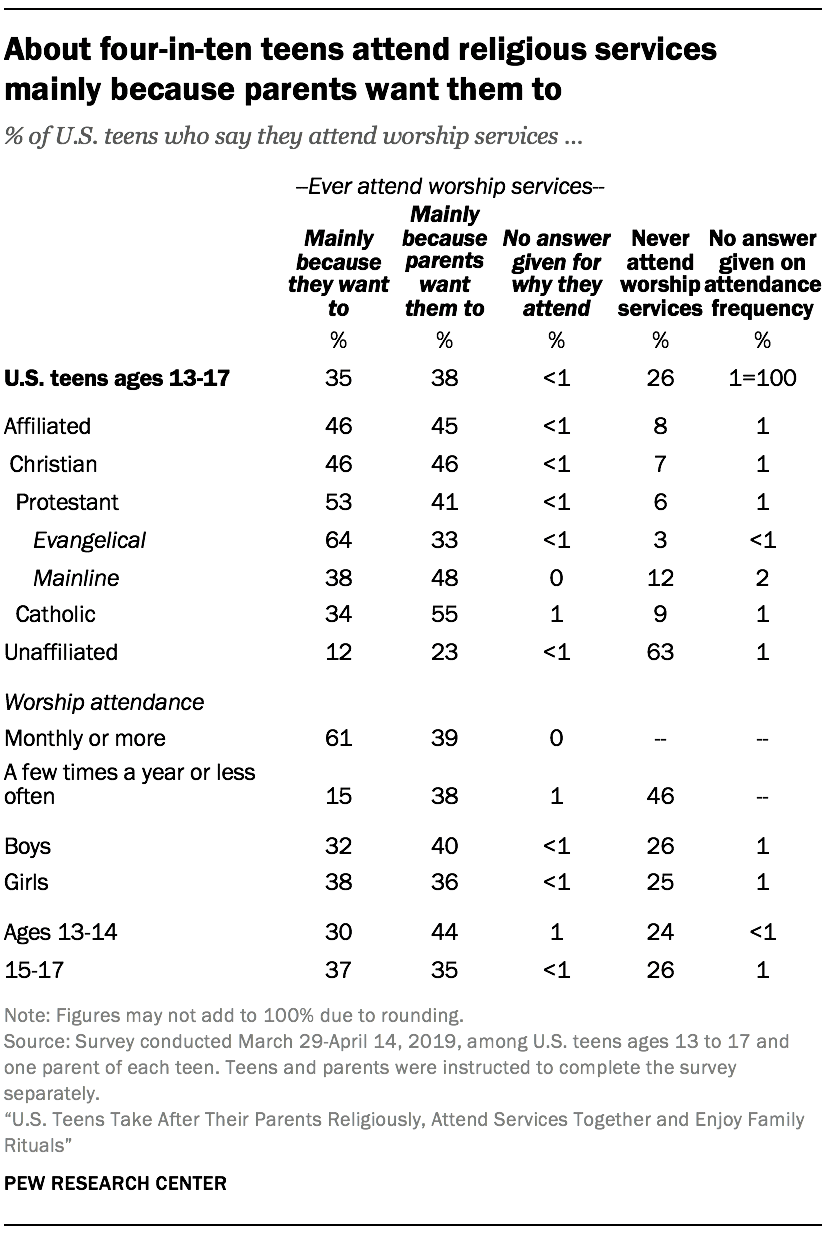 Teens’ reasons for attending worship services also vary by characteristics other than their religion. For instance, girls (38%) are moderately more likely than boys (32%) to attend services because they want to. And younger teens are particularly likely to say they attend because their parents want them to, with 44% of those ages 13 to 14 expressing this sentiment, compared with 35% of teens ages 15 to 17. 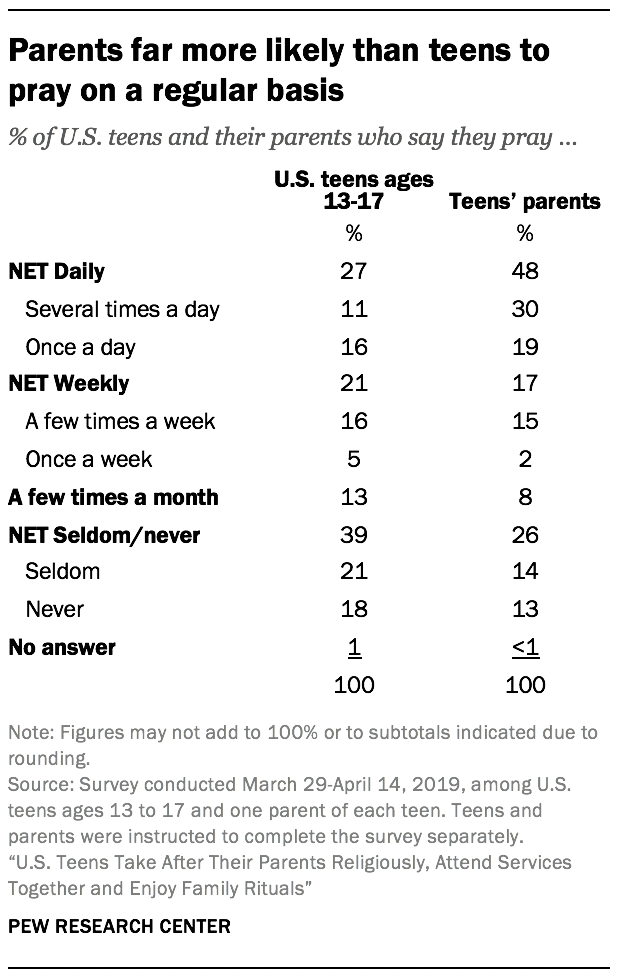 About four-in-ten U.S. adolescents report seldom or never praying. The majority, however, say they pray at least a few times a month – including about a quarter who say they pray on a daily basis (27%).

But while parents and teens attend religious services at similar rates, there is a wider gap between the two groups when it comes to prayer habits. Parents are about 20 percentage points more likely than teens to say they pray on a daily basis (48% vs. 27%), suggesting that it may be easier for parents to compel worship service attendance than daily prayer. Indeed, roughly half of all teens give a different response than their parent about how often they pray, and the vast majority in this group (82%) are teens who pray less often than their parents.26

Some of this difference may be related to the fact that teens are more likely than their parents to identify as religiously unaffiliated (see Chapter 1) and less likely to believe in God with absolute certainty (see Chapter 2). 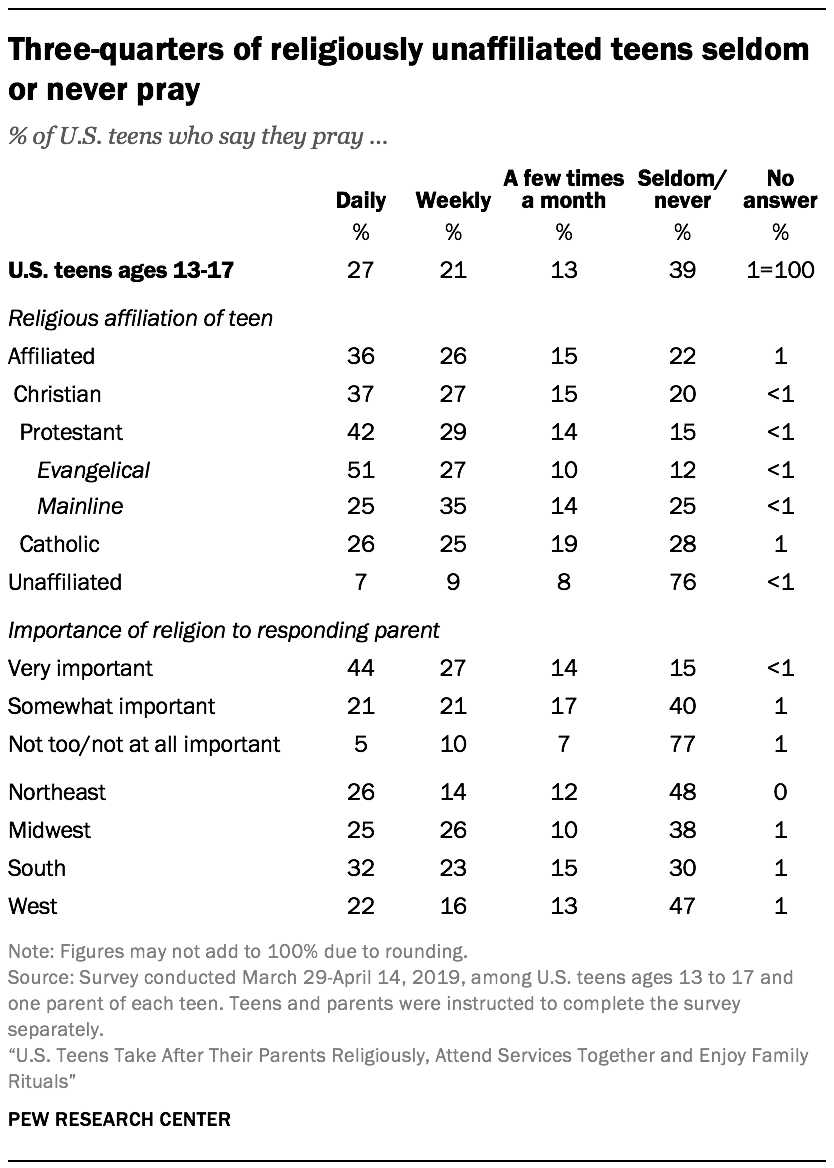 There is less variation in prayer among teens with parents who say religion is not too or not at all important, with three-quarters of those teens seldom or never praying.

Somewhat fewer U.S. teens (51%) say they have ever attended a religious youth group, although the percentage who currently do so – at least sometimes – is identical to the share who say they currently participate in religious education programs (29%).

Majorities of religiously unaffiliated teens, meanwhile, say they have never been involved in religious education programs or youth groups.

Participation in religious education and youth groups is connected with other standard types of religious observance. For instance, teens who attend worship services regularly are more likely than others to also attend religious youth group meetings.

But religious characteristics are not the only traits linked with participation in religious education and youth groups for U.S. teens. For instance, girls are more likely than boys to say they have ever attended a religious youth group. And by both measures, regular participation appears to decline as teens move through high school: While 37% of teens in eighth grade or lower say they often or sometimes participate in religious education programs, and 34% attend youth groups with the same frequency, fewer 11th and 12th graders report doing the same (19% and 26%, respectively).

Some parental attributes also are related to participation in religious extracurriculars. Teens whose responding parent is a Republican or a Republican-leaning independent are more likely than the children of Democrats to say they currently attend a religious education program (36% vs. 23%) or youth group (39% vs. 21%) at least sometimes. 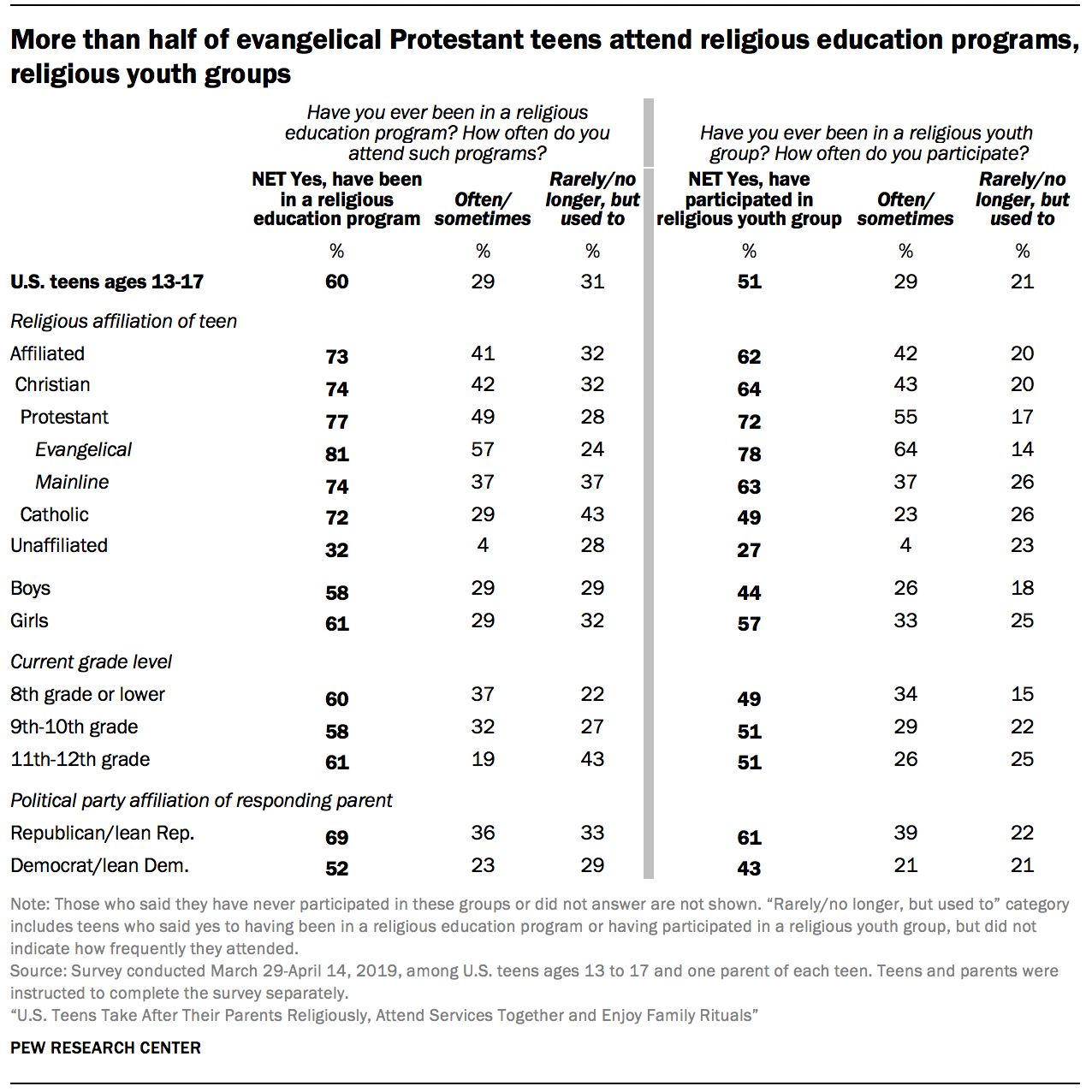 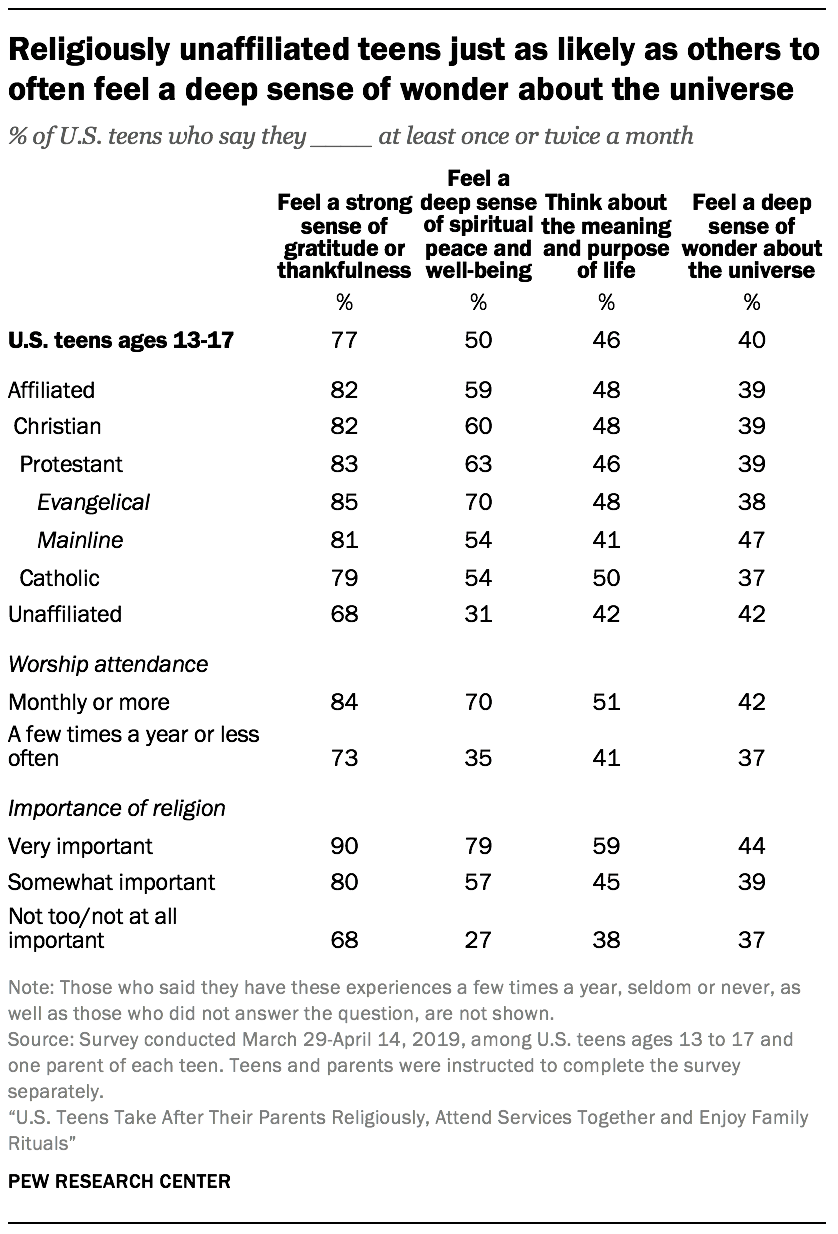 In addition to measuring several forms of traditional religious practice, the survey also sought to gauge how often teens have spiritual experiences or engage with big questions about the world.

The vast majority of teens say they feel a strong sense of gratitude or thankfulness with some regularity (at least once or twice a month), including about half (48%) who say they feel this way at least once a week. Only 7% of American adolescents report that they seldom or never feel gratitude.

The other survey questions relating to meaning and spirituality measured experiences that are less universal but still relatively common. For instance, half of U.S. teens say they feel a deep sense of spiritual peace and well-being on a regular basis, and nearly as many (46%) say they think about the meaning and purpose of life at least once or twice a month. In both cases, about a quarter report having these feelings or thoughts at least weekly. (See topline for full results.)

Four-in-ten teenagers report regularly feeling a deep sense of wonder about the universe, although nearly as many (36%) say they seldom or never feel this way.

Evangelical teens are especially likely to say they often feel a sense of spiritual peace and well-being, with seven-in-ten (70%) feeling this way at least once a month. Religiously unaffiliated teens are much less likely to report this sensation (31%) and also are somewhat less likely than those with a religious affiliation to say they regularly feel a sense of gratitude. Unaffiliated teenagers, however, are no less likely than others to say they feel a deep sense of wonder about the universe at least once or twice per month.

As the share of Americans who identify as “spiritual but not religious” rises, one may wonder whether these spiritual experiences are replacing traditional religious observance. But more often, they seem to complement other religious behaviors, such as worship attendance. Teens who attend religious services on a regular basis are much more likely than those attend less often to say they often feel a strong sense of spiritual peace and well-being, and they also are more likely to feel gratitude or think about the meaning of life.

Again, there are only modest differences between teens who are more religiously observant and those who are less religious when it comes to the question of feeling a deep sense of wonder about the universe. But teens who attend religious services less often or who say religion is not important in their lives are no more likely to report frequently experiencing any of the four sensations mentioned in the survey, mirroring a pattern seen among adults.