1. Number of countries with ‘very high’ government restrictions on religion ticked down in 2018

In 2018, 26 of the 198 countries in this study had “very high” levels of government restrictions, a slight decrease from 27 in 2017 – which was the largest number of countries to reach the “very high” category since the study began in 2007.

On the other hand, the number of countries with “high” government restrictions rose by five in 2018, from 25 to 30. (For details about the thresholds for the “very high” and “high” categories, see Methodology.)

Three countries or territories – Iraq, Western Sahara and Yemen – had increased levels of government restrictions in 2018 that pushed them into the “very high” category (though all three had been in the top category in some previous years). Yemen, for example, returned to the “very high” category for the first time since 2011 after its score on the Government Restrictions Index (GRI) increased from 4.7 in 2017 to 6.6 in 2018, due in part to Houthi authorities instituting fees for people making the hajj (Muslim pilgrimage to Mecca) and shutting down travel agencies that would not comply.20

Houthi forces also intensified pressure on members of the Baha’i faith. During the year, Houthi leader Abdul-Malik al-Houthi called on his followers to defend Yemen against Baha’is, who he said were “satanic” and at war with Islam. Houthi forces also continued to detain Baha’is and charged more than 20 of them with apostasy and espionage.21

Iraq and Western Sahara returned to the “very high” category in 2018 after dropping into the “high” category due to small decreases (less than 1 point on the GRI) in 2017. In 2018, both countries experienced very small increases that moved them back into the highest category.22

Four countries – Comoros, Laos, Pakistan and Sudan – fell out of the “very high” category, although all maintained “high” levels of government restrictions. Laos, Pakistan and Sudan had small decreases of less than 1 point in 2018. Comoros, however, experienced a more substantial decrease, from 7.4 to 5.8 on the GRI, due to fewer reported incidents of government officials harassing minority Muslim groups. In 2017, the government had closed mosques of certain Muslim communities.23

For a complete list of all countries in each category, see the Government Restrictions Index table in Appendix A.

As with government restrictions, some countries stand out each year for having very high levels of social hostilities involving religion. Social hostilities include violence carried out by individuals as well as efforts by groups outside of government to target people based on their religion, such as harassment of a religious minority by members of the majority faith. 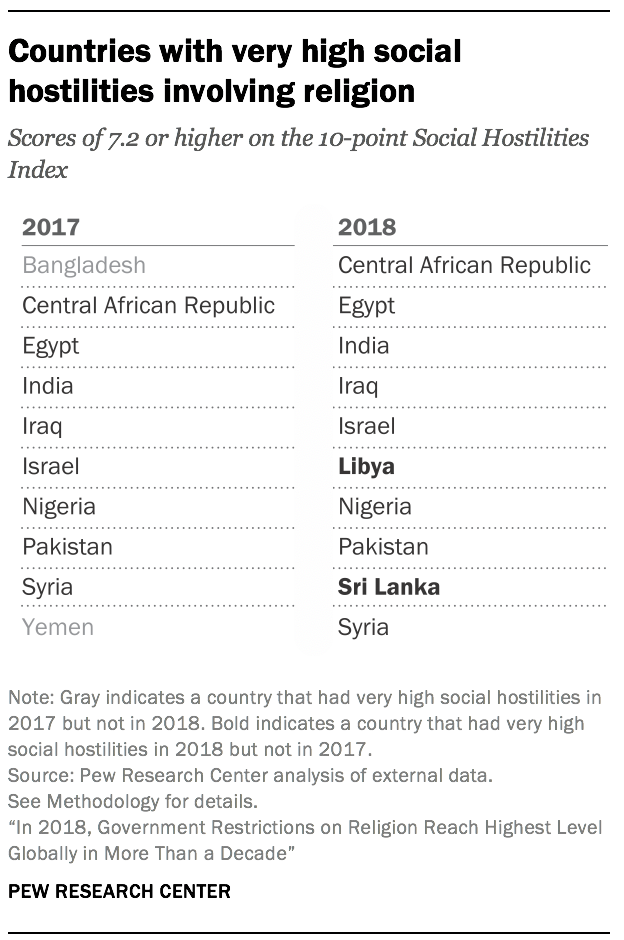 Libya and Sri Lanka had increases in their Social Hostilities Index (SHI) scores that put them into the “very high” category in 2018. Libya experienced a small increase of less than 1 point, while Sri Lanka’s SHI score rose from 5.6 to 7.2. Sri Lanka’s increase was due in part to a series of violent riots that took place after a Sinhalese Buddhist man was killed by Muslims. The killing sparked retaliation against the Muslim community that left 30 Muslims injured or dead and led the government to declare a 10-day state of emergency.24(This report focuses on data from 2018, before the Easter Sunday bombings in Sri Lanka that killed hundreds in 2019.)

Meanwhile, Bangladesh and Yemen fell out of the top category for social hostilities in 2018, with small decreases that moved them into the “high” category. In Bangladesh, for example, there were fewer reported incidents of communal violence between religious groups in 2018 than in 2017.

For a complete list of all countries in each category, see the Social Hostilities Index table in Appendix B.

Many countries do not reach the “very high” or “high” categories of government restrictions but still experience notable changes in how their governments restrict religion. To capture these situations, Pew Research Center analyzes the magnitude of changes across all countries and categories to provide insight into government actions and policies that have an especially large impact on religious restrictions in each country in a given year. 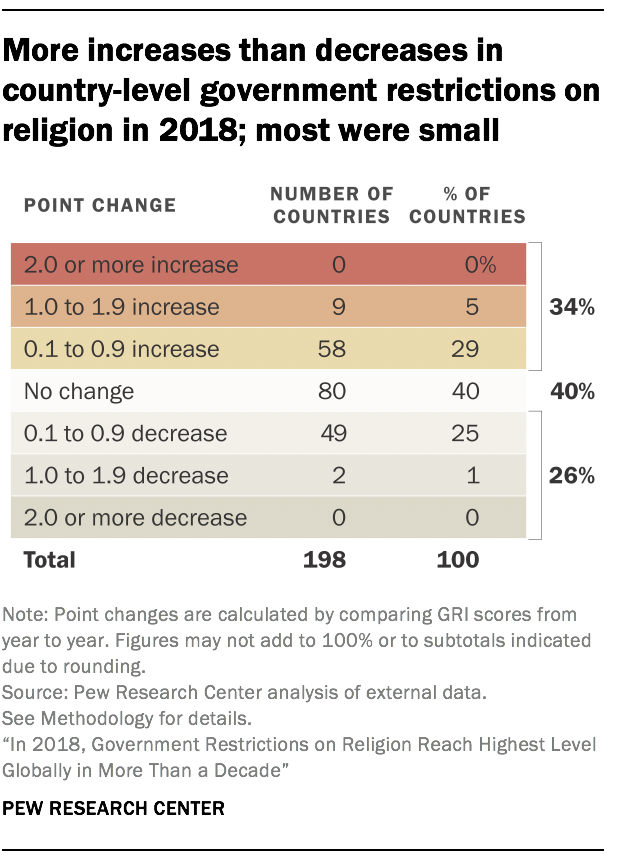 Yemen experienced the greatest change in its GRI score, rising by 1.9 points (see details above). No countries saw large changes of 2.0 or more points in their GRI scores in 2018. Eleven countries saw modest changes (1.0 to 1.9 points) in their GRI scores, with nine of them experiencing increases. In Armenia, for example, police detained a self-described atheist youth in an attempt to pressure him to rejoin the Armenian Apostolic Church, according to an independent media report.25

Most countries (107 out of 198) experienced only small changes (less than 1 point) in their GRI scores, including 58 with increases and 49 with decreases. 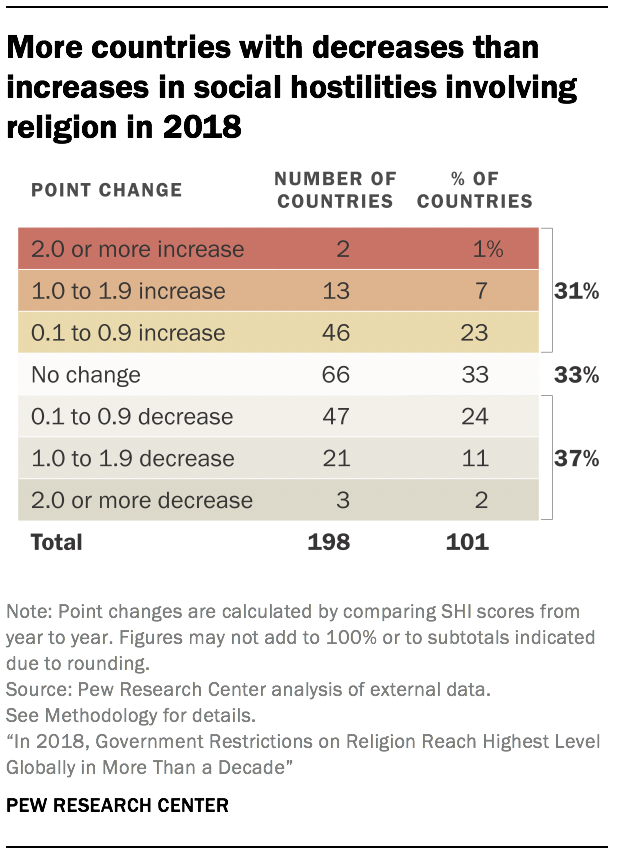 In 2018, 61 countries experienced increases in their SHI scores, while 71 countries had decreases.

Five countries saw large changes (2 points or more) in social hostilities in 2018, with two – El Salvador and South Korea – rising from the “low” category to the “moderate” category. In South Korea, more than 120,000 people protested coercive religious conversion after reports that a couple had killed their daughter during an effort to forcibly convert her to Christianity.26

The other three countries – Italy, Uganda and the United Kingdom – experienced large decreases in their SHI scores. The decline in social hostilities in Italy may be due in part to the government not publishing statistics on religiously motivated incidents in 2018, unlike in previous years.27

Thirty-four countries registered modest changes in SHI scores (1.0 to 1.9 points), including 13 increases and 21 decreases. One of the increases occurred in Malaysia, where there were additional reports of violence against religious groups, including an incident of mob violence in which 200 masked individuals tried to remove worshippers from a Hindu temple.28

Out of the 198 countries in the study, 93 experienced small changes in their SHI scores (0.1 to 0.9 points) – 46 with increases and 47 with decreases. There were no changes in SHI scores in 66 countries. 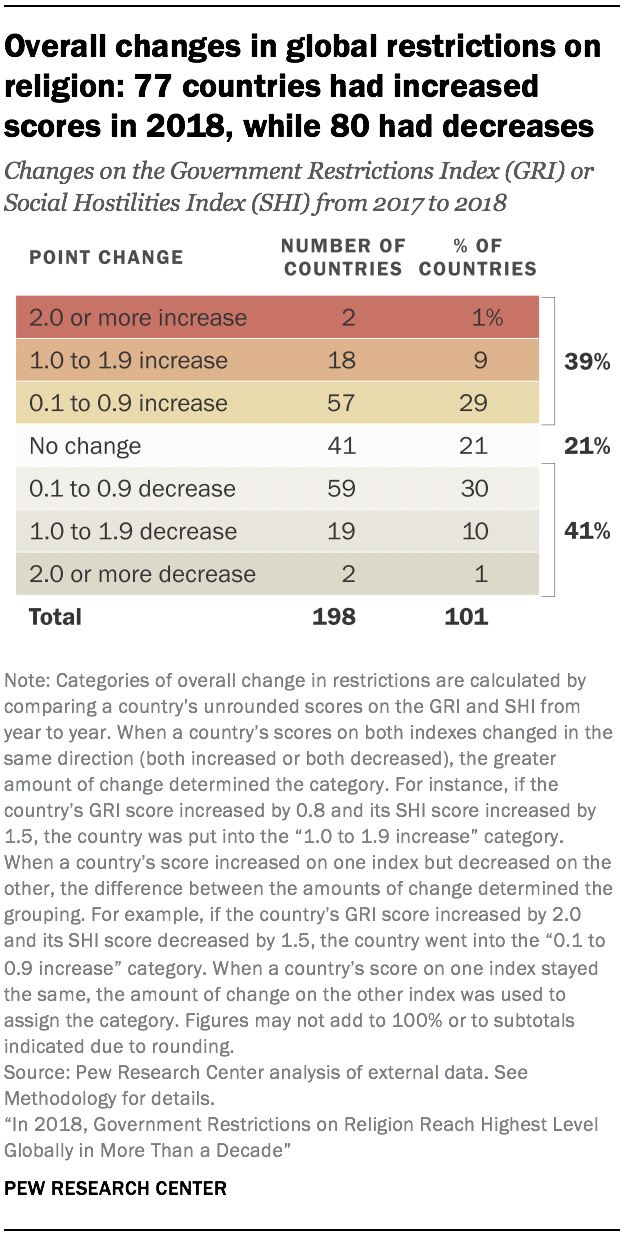 In addition to looking at measures of government restrictions separately from social hostilities, Pew Research Center analyzes these changes together to help provide a more complete picture of religious restrictions in each country.

In 2018, roughly equal numbers of countries had increases (77 countries) and decreases (80) in their overall scores – in most cases, just small changes in either direction.

Among the countries with net increases, 57 had small increases (less than 1 point) and 18 had modest increases (between 1.0 and 1.9 points). Only two countries (El Salvador and South Korea) had large increases of 2 points or more in their overall scores.

Among the countries that had decreases, most (59) had small decreases and fewer (19) had modest decreases. Two countries – Italy and the United Kingdom – had large decreases in their overall scores.

Forty-one countries had no change in their overall scores between 2017 and 2018.

Next: 2. Harassment of religious groups continues to be reported in more than 90% of countries Next Page → ← Prev Page