Even when the survey was conducted, mostly before the coronavirus pandemic caused many churches to stop holding in-person services, three-in-ten Black Americans said they tuned into religious services online, on TV or on the radio on a weekly basis. A subsequent survey in July 2020, in the midst of the outbreak, showed that about three-quarters of Black Americans who had previously reported attending in-person services at least monthly had recently tuned in to virtual services.

This chapter also explores what leadership roles, if any, Black adults play in their congregations, how often they participate in prayer groups or scripture study groups, and the frequency with which they engage in spiritual practices such as praying at a home altar or shrine, burning candles or incense for religious or spiritual reasons, or consulting fortune-tellers, such as a diviner or reader.

Women and older Black adults tend to engage in many of these religious activities at higher rates than men and younger Black adults, respectively. And on the whole, by many of the standard measures of religious practice measured in the survey, Black Protestants appear to be more religious than Black Catholics, as do African immigrants when compared with U.S.-born Black Americans. 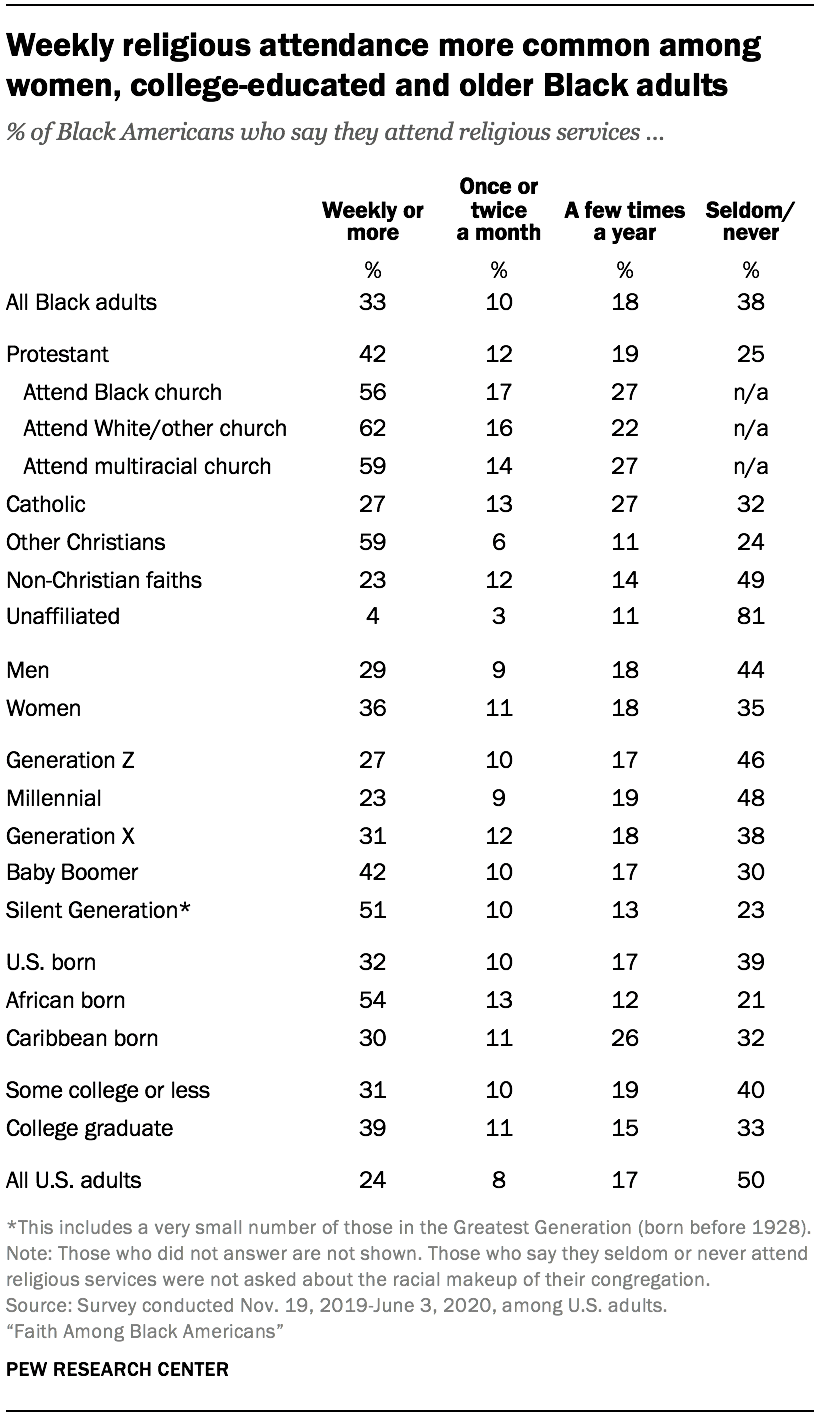 One-third of Black adults say they go to religious services at least once a week (33%). An additional 28% say they attend either once or twice a month (10%) or a few times a year (18%). And 38% say they seldom or never attend services.

Black Protestants attend services more frequently than Black Catholics, but not more than other Christians. Four-in-ten Protestants (42%) say they attend church on a weekly basis, compared with roughly a quarter of Catholics (27%). However, among Black Americans who identify with other Christian religions – most of whom are Jehovah’s Witnesses – 59% attend at least once a week. Among religiously unaffiliated Black adults, just 4% say they attend religious services weekly, while fully eight-in-ten (81%) say they seldom or never attend religious services.

African immigrants (54%) are much more likely to attend religious services weekly than are immigrants from the Caribbean (30%) or U.S.-born Black adults (32%). In addition, women and college-educated Black adults are more likely than men and those without a college degree, respectively, to attend on a weekly basis, though these differences are more modest.

Most respondents took the survey prior to the coronavirus outbreak that closed many congregations or limited their attendance.

Personal prayer is common among Black adults, even among Protestants who rarely attend church 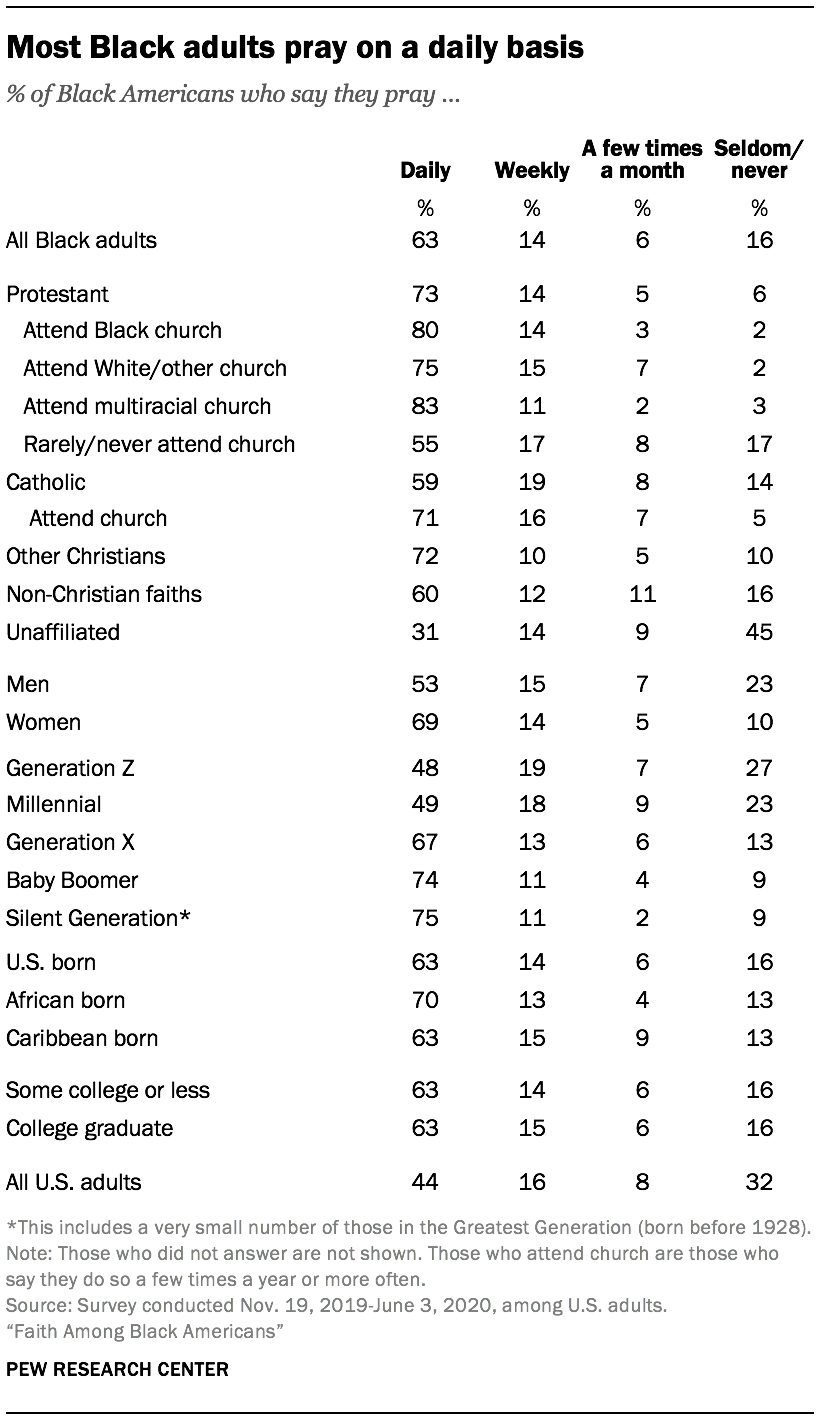 Most Black adults regularly engage in personal prayer, with 63% saying they pray at least once a day, while 14% pray on a weekly basis. Another 6% say they pray a few times a month, while 16% of Black adults say they seldom or never pray.

Most Black adults who identify with a religion pray daily, whether they are Protestants (73%), Catholics (59%), Christians of other traditions (72%), or members of non-Christian faiths (60%). Even among Black Americans with no religious affiliation, three-in-ten (31%) report praying daily, and 45% pray at least weekly.

Among Black Protestants, frequent prayer is common even among those who rarely go to church: Among Protestants who say they seldom or never attend religious services, 55% say they pray every day, and just 17% say they rarely or never pray. 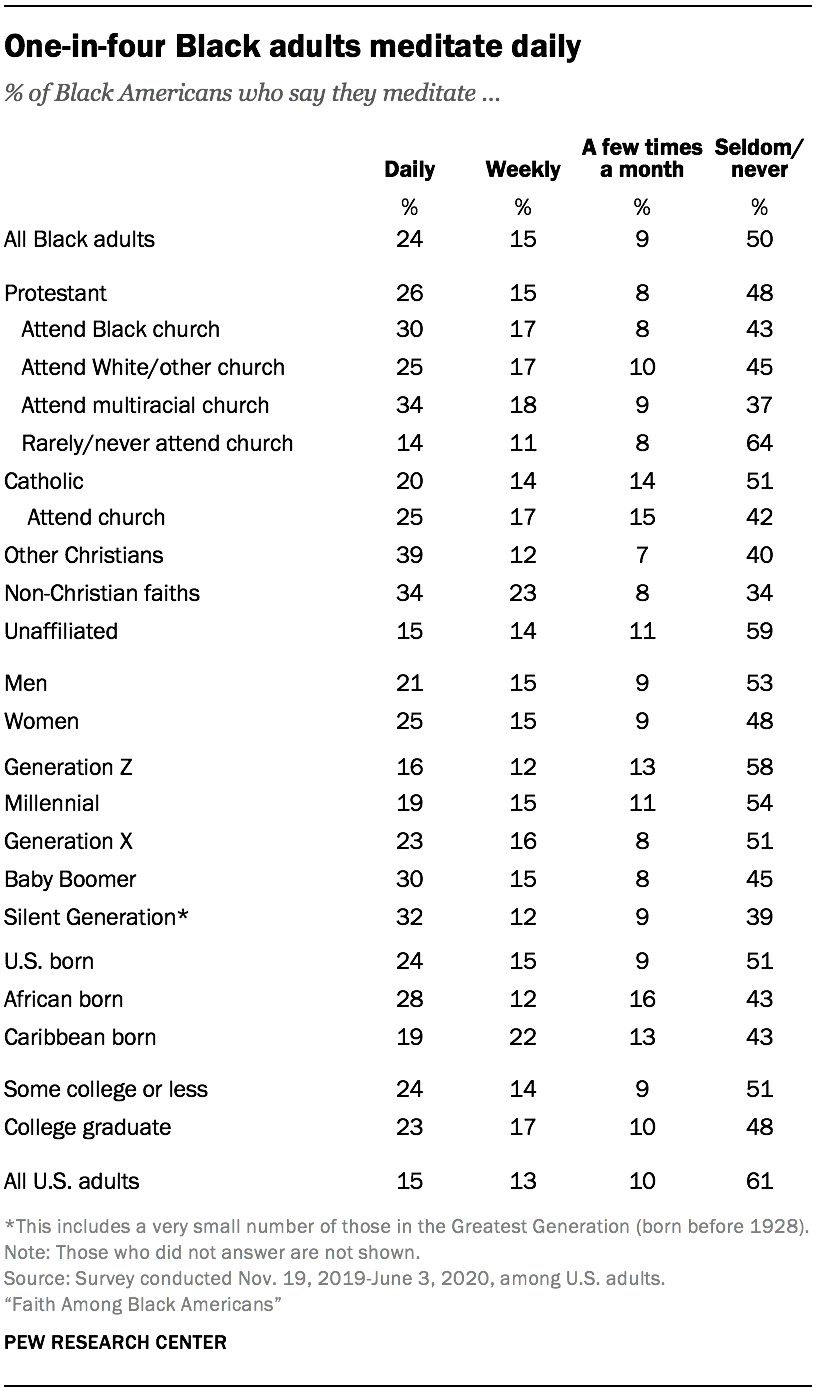 Four-in-ten or more churchgoing Black Protestants and Catholics meditate on a daily or weekly basis. By comparison, somewhat fewer Protestants who rarely or never attend religious services (26%) or religious “nones” (29%) meditate this often.

As with prayer, those in Generation X and older are more likely than Millennials and members of Generation Z to meditate at least weekly.

About four-in-ten Black adults read scripture outside of religious services several times a week or more often, while 15% read scripture about once a week or a few times a month and 46% seldom or never do this.

Black Protestants who rarely or never attend church are less likely than other Protestants to say they read scripture regularly.

About half of Black Baby Boomers (48%) and those in the Silent Generation (51%) read scripture outside of religious services several times each week, compared with four-in-ten members of Generation X (39%), three-in-ten Millennials (29%) and just one-in-five in Generation Z (21%).

A larger share of women than men read scripture multiple times per week (43% vs. 31%). And African immigrants are more likely to regularly read scripture than U.S.-born or Caribbean-born Black Americans. 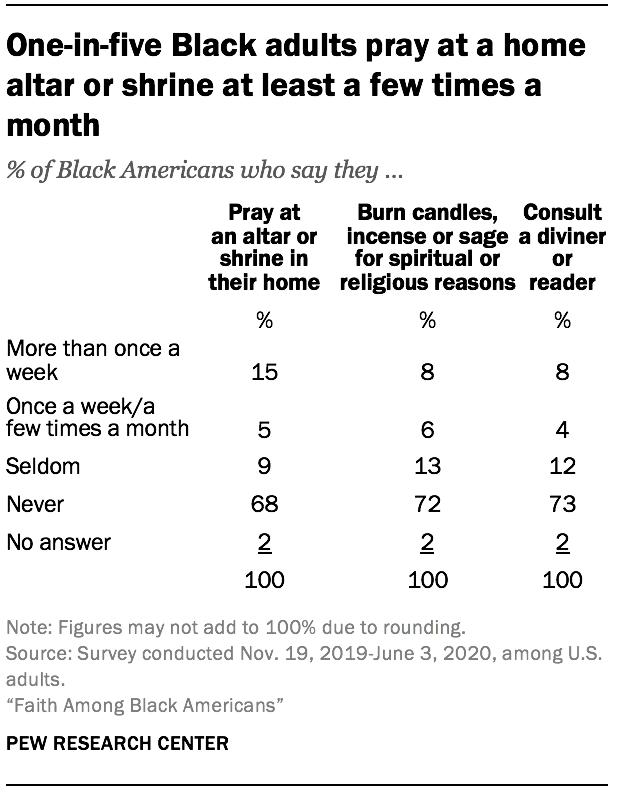 Black Catholics (20%) are more likely than Black Protestants (11%) to say they burn candles, incense or sage for spiritual or religious reasons at least a few times a month. This could reflect participation in the Catholic devotional practice of burning candles in churches or at certain times of the year (such as Advent). And, though more religious by many measures, African immigrants are about as likely as U.S.-born Black Americans to consult a diviner or reader. 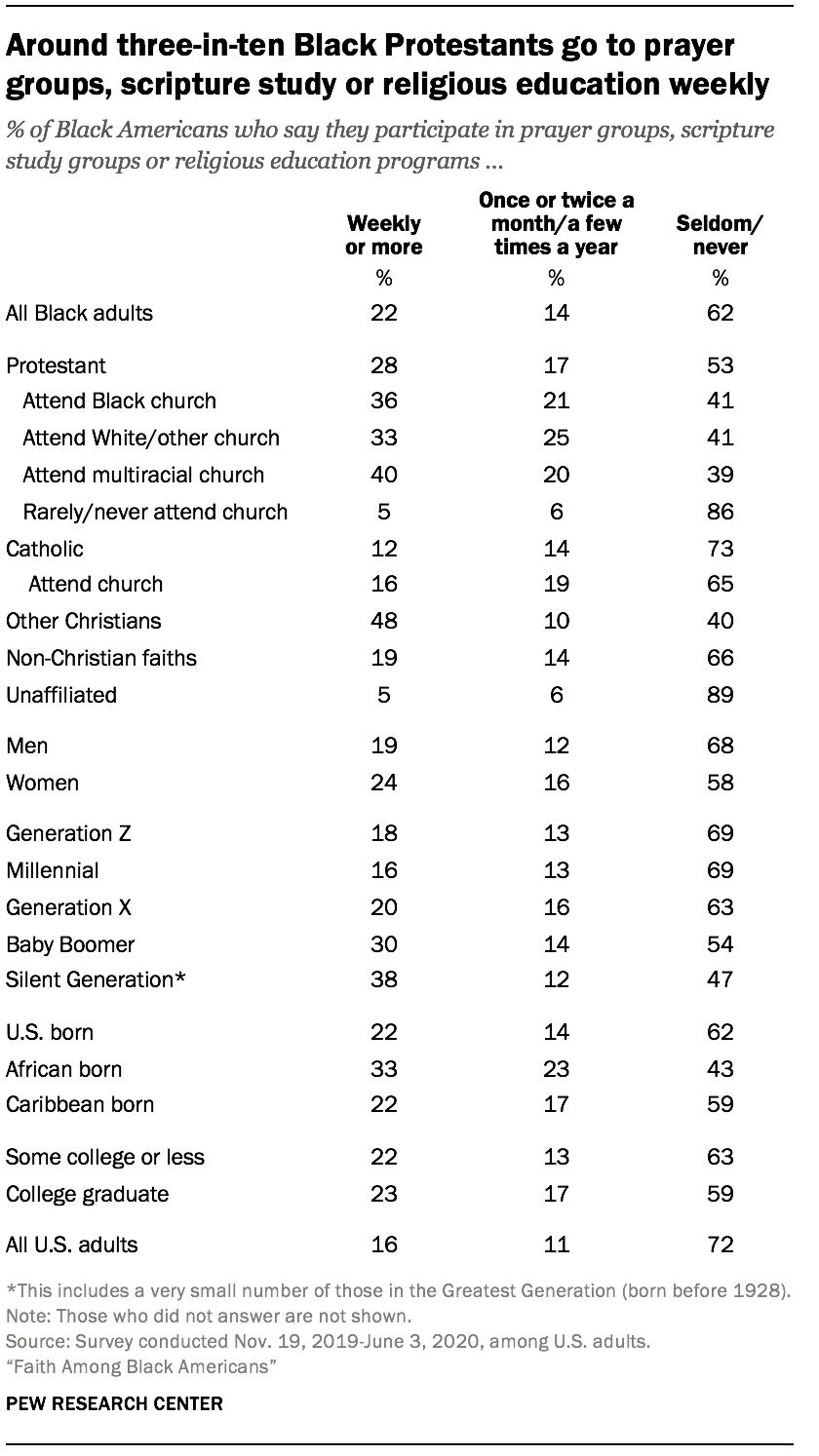 About a fifth of Black adults (22%) say they participate in prayer groups, scripture study programs or religious education programs at least once a week. Another 14% say they do so monthly or a few times a year, while the majority (62%) say they seldom or never partake in such religious activities.

Black Protestants (28%) are more likely to take part in these activities on a weekly basis than Catholics (12%), although an even higher share of people in other Christian groups (such as Jehovah’s Witnesses) do this (48%).

African immigrants are more likely than U.S.-born or Caribbean-born Black adults to say they participate in prayer or scripture groups, mirroring patterns on some other measures of religious engagement.

Though women are more likely than men to attend religious services or participate in prayer groups, they are equally likely to say they play a leadership role in their congregation. 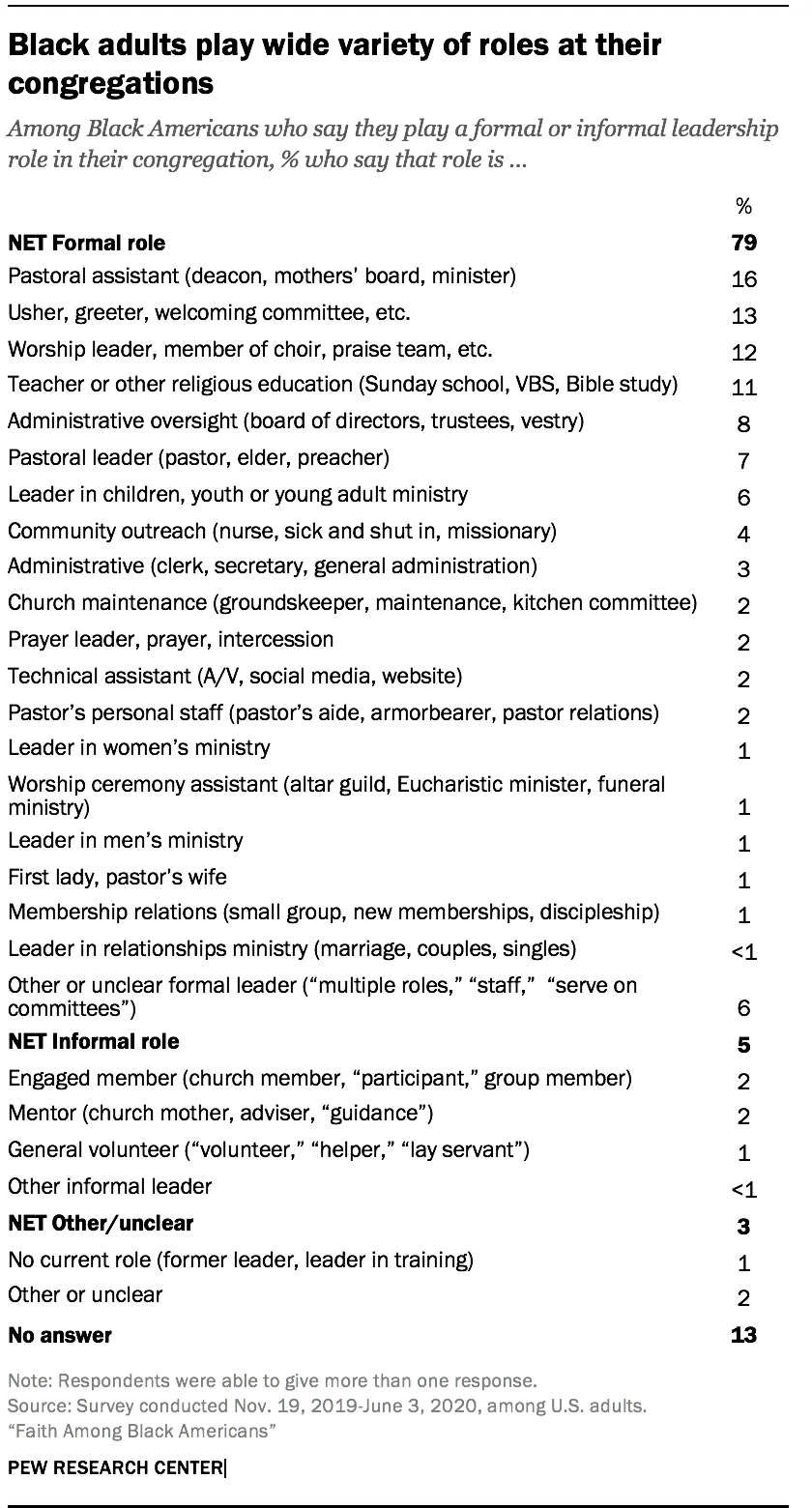 Holding a leadership role in a congregation is slightly more common among Black adults who attend religious services at least a few times a year than it is among all U.S. adults who attend that often (24% vs. 18%).

The most common types of responses include a pastoral assistant, such as a deacon (16%); an usher, greeter or member of the welcoming committee (13%); a worship leader or member of the choir or praise team (12%); and a religious educator, such as a teacher at Sunday school or vacation Bible school (11%).

Before the COVID-19 outbreak, three-in-ten Black adults listened to sermons online, on TV or on the radio on a weekly basis 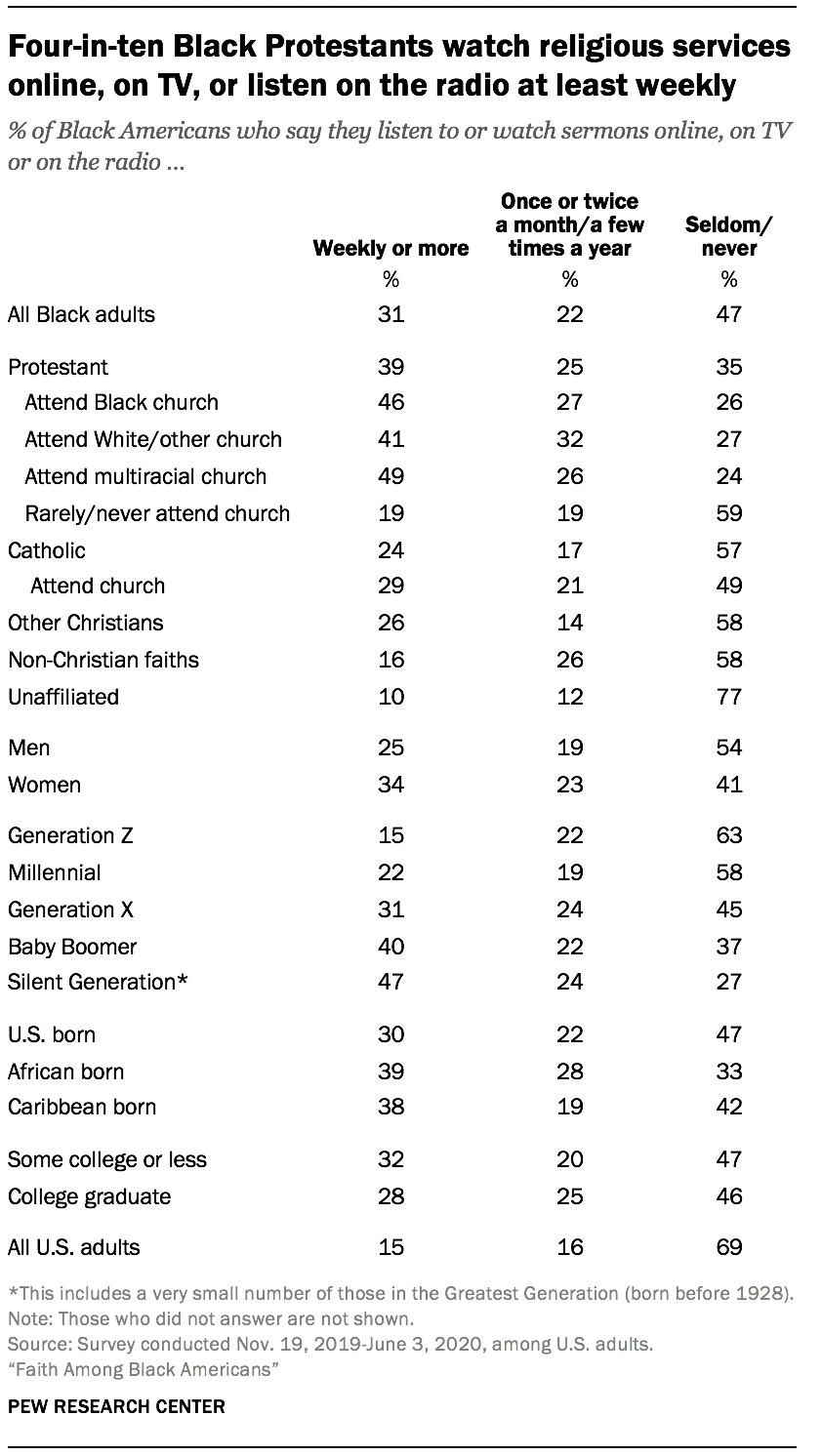 In addition to asking about in-person attendance at religious services, personal prayer practices and participation in scripture study, the survey also asked respondents how often they watch or listen to religious services online, on TV or on the radio. The survey, which was conducted mostly before the COVID-19 outbreak intensified in the U.S. in March 2020, found that about three-in-ten Black adults report doing so at least once a week (31%), while 22% do this on a monthly or yearly basis and nearly half (47%) say they seldom or never participate in virtual services.

A higher share of Black Protestants (39%) than Catholics (24%) watch or listen to sermons virtually on a weekly basis. And among those who attend in-person religious services at least once or twice a month, about half of Protestants (53%) also watch or listen to virtual services weekly, as do somewhat fewer Catholics (37%). By comparison, 16% of Black adults who attend in person a few times a year or less often regularly consume sermons virtually.

Due to the survey’s timing (it was mostly conducted prior to the coronavirus outbreak), most respondents answered these questions before houses of worship cancelled or restricted attendance at in-person services due to the virus. A subsequent Pew Research Center survey, conducted in July 2020, asked respondents whether they had been watching services online or on TV in the midst of the outbreak. In that survey, 77% of Black of adults who, prior to the outbreak, said they typically attend religious services at least monthly also said that they had watched religious services online or on TV in the month before the July survey was conducted. This compares to 72% of all U.S. adults who attend religious services at least monthly who were tuning into virtual religious services during the pandemic.

Next: 5. Churches and religion in Black American life Next Page → ← Prev Page