Pew Research Center conducted this survey to help track how the evolving coronavirus outbreak is affecting the religious lives and worship habits of Americans. For this report, we surveyed 12,055 U.S. adults from March 1 to 7, 2021. All respondents to the survey are part of Pew Research Center’s American Trends Panel (ATP), an online survey panel that is recruited through national random sampling of residential addresses. This way nearly all U.S. adults have a chance of selection. The survey is weighted to be representative of the U.S. adult population by gender, race, ethnicity, partisan affiliation, education, religious affiliation and other categories. For more, see the ATP’s methodology and the methodology for this report.

As coronavirus cases, hospitalizations and deaths decline and vaccination rates rise across the United States, life in religious congregations is showing signs of slowly returning to normal. A new Pew Research Center survey finds that Americans are increasingly confident they can safely go to services at a church, temple, mosque or other house of worship. And the percentage who say they actually have attended religious services – in person – in the past month is slightly higher than it was last summer. Still, the situation in U.S. congregations remains far from ordinary, and this promises to be the second consecutive highly atypical Easter season for Christians. 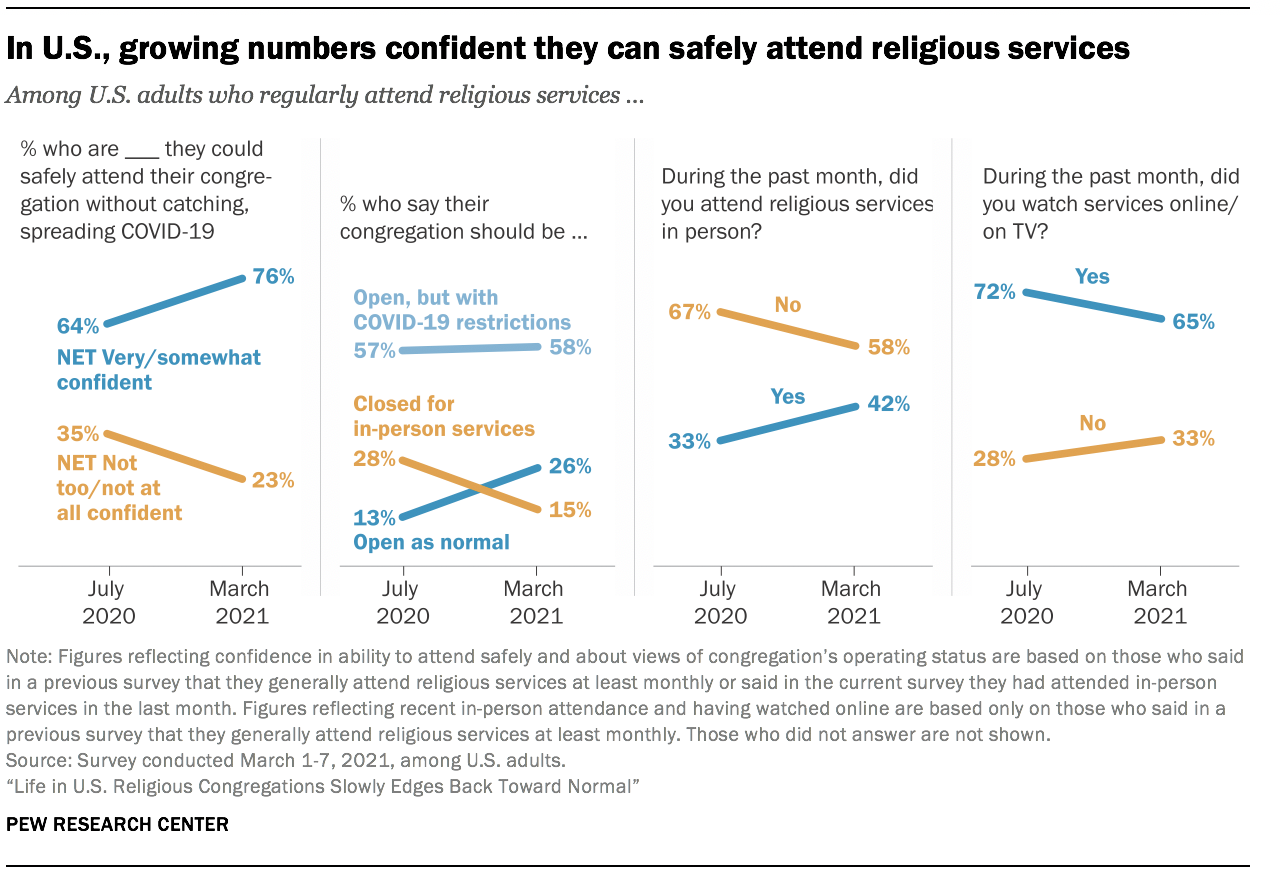 Three-quarters of U.S. adults who normally attend religious services now say they are “very” or “somewhat” confident they can do so safely, without spreading or catching the coronavirus – up 12 percentage points from when this question was last asked in July 2020. Over that period, there also has been a considerable drop in the share who say they think their congregation should be closed to help stop the spread of the virus.

Roughly four-in-ten people who typically attend religious services at least once or twice a month say they actually have done so, in person, during the past month – up 9 points since last summer. And as in-person attendance has trended upward, there has been a corresponding decline in the share of regular religious attenders who recently have watched services streamed online or on television. 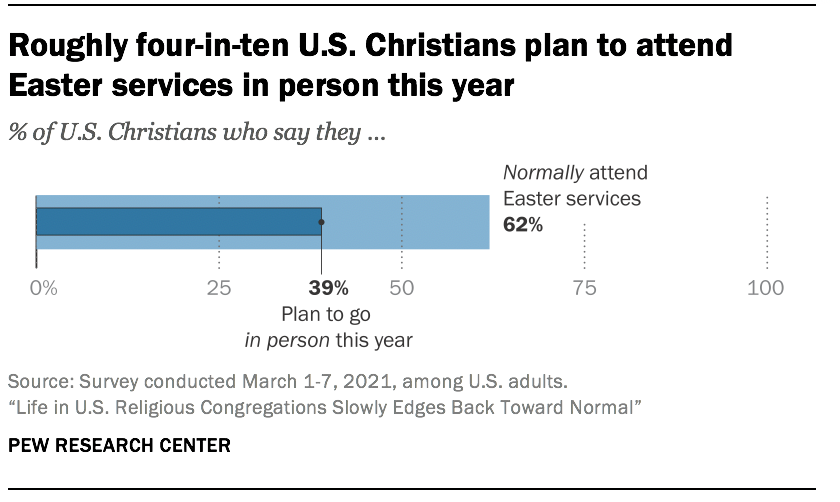 But while in-person religious attendance has begun to rebound, it still is far from normal. Most people who say they generally attend religious services at least once or twice a month (58%) say they have not attended during the past month. And just four-in-ten U.S. Christians (39%) plan to go in person to church services this Easter Sunday, which is sharply lower than the 62% who say they typically go to church on Easter. 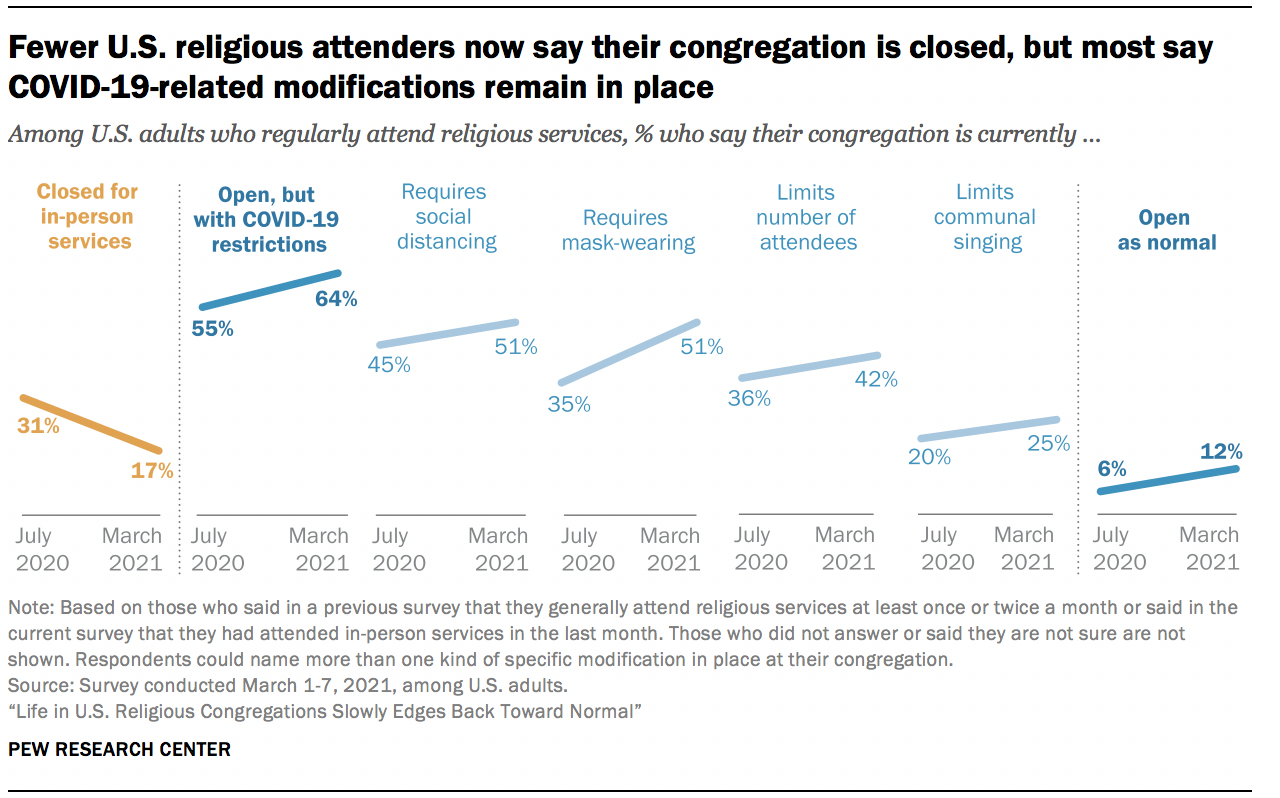 These are among the key findings of a new Pew Research Center survey conducted March 1-7, 2021, among 12,055 U.S. adults on the Center’s online, nationally representative American Trends Panel. More information on how the survey was conducted is available in the methodology.

The study was designed to gauge how the coronavirus outbreak is affecting the way Americans participate in their religious congregations. It finds that congregational life is returning to normal most rapidly among evangelical Protestants. Overall, half of evangelicals who typically attend religious services at least monthly say they have attended church in person during the past month. And half of all evangelicals (not just those who normally attend) say they plan to attend Easter Sunday services in person this year.

Still, even among evangelicals, there continues to be a large gap between the share who typically attend religious services and the smaller share who have done so recently or plan to do so soon (i.e., for Easter). 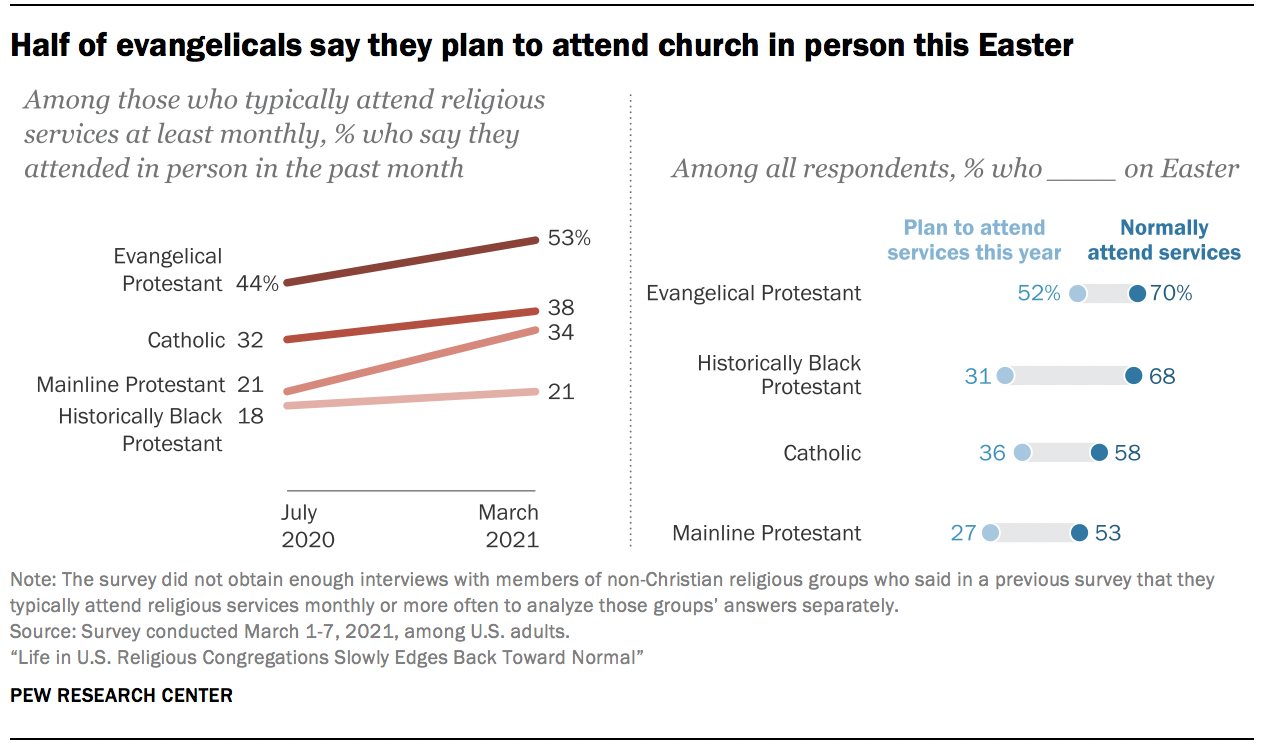 And at the opposite end of the spectrum from evangelicals, the return to pre-pandemic levels of in-person religious attendance is occurring much more slowly among those in the historically Black Protestant tradition.

In general, this group is highly observant: Among respondents in the current survey, for instance, 56% of those in the historically Black Protestant tradition say they typically attend religious services at least once or twice a month, far higher than the share of Catholics (39%) and mainline Protestants (37%) who do so.

But just 21% of those in the historically Black Protestant tradition who typically go to religious services at least monthly say they went, physically, to in-person religious services in the past month, which is little changed from last summer. And just 31% of people in the historically Black Protestant tradition say they plan to attend Easter services in person this year, compared with two-thirds (68%) who say they go to church on Easter in a typical year.

More broadly, other surveys show that the coronavirus pandemic has hit communities of color especially hard. And the current survey finds that Black Americans, in particular, are cautious about returning to their congregations. For example, Black Americans are less likely than non-Hispanic White adults to say they attended religious services in person during the past month or that they are “very confident” they can now attend religious services safely. Black Christians are less likely than White Christians and no more likely than Hispanic Christians to say they plan to go to Easter services this year, even though they are the group most likely to attend on Easter in a typical year. And fully three-in-ten Black religious attenders say their congregation should be closed altogether because of the outbreak, far higher than the share of White (non-Hispanic) and Hispanic adults who feel the same way. 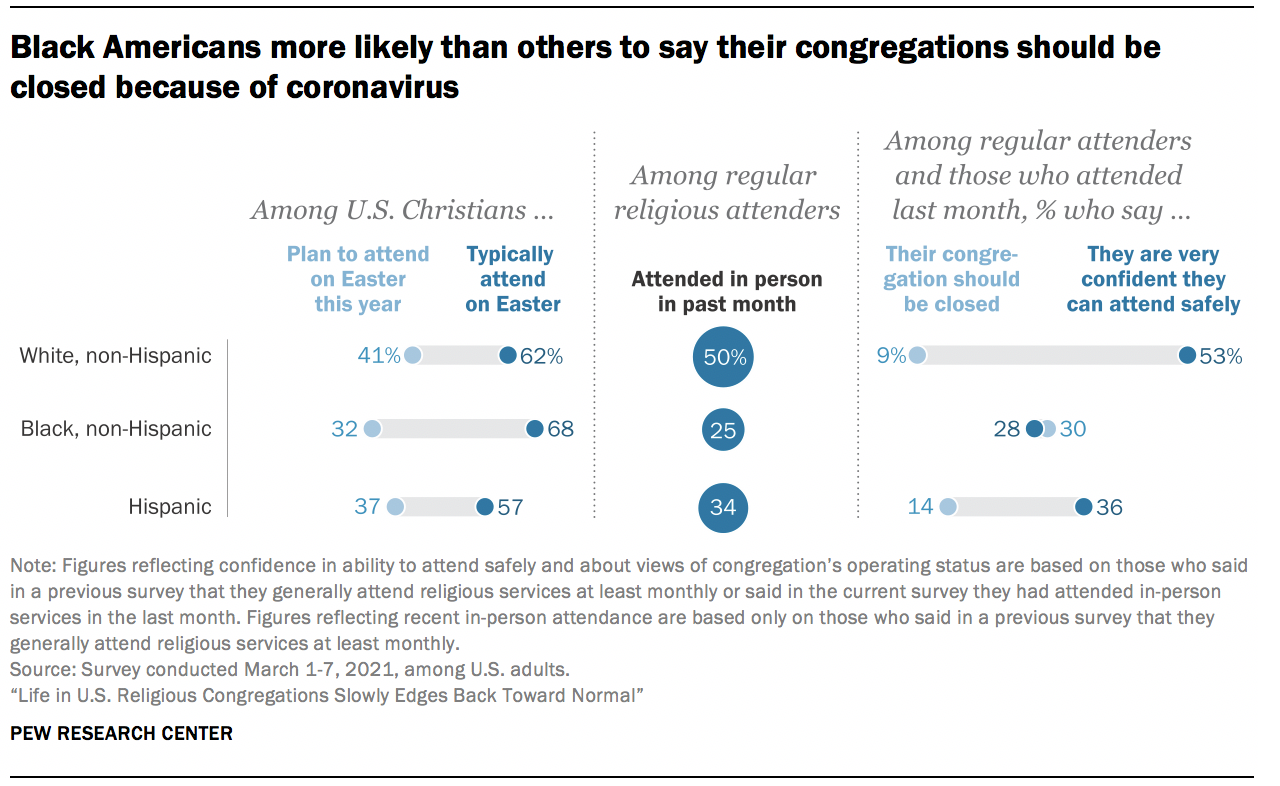 Other key findings from the new study include:

These and other findings are discussed in more detail below. 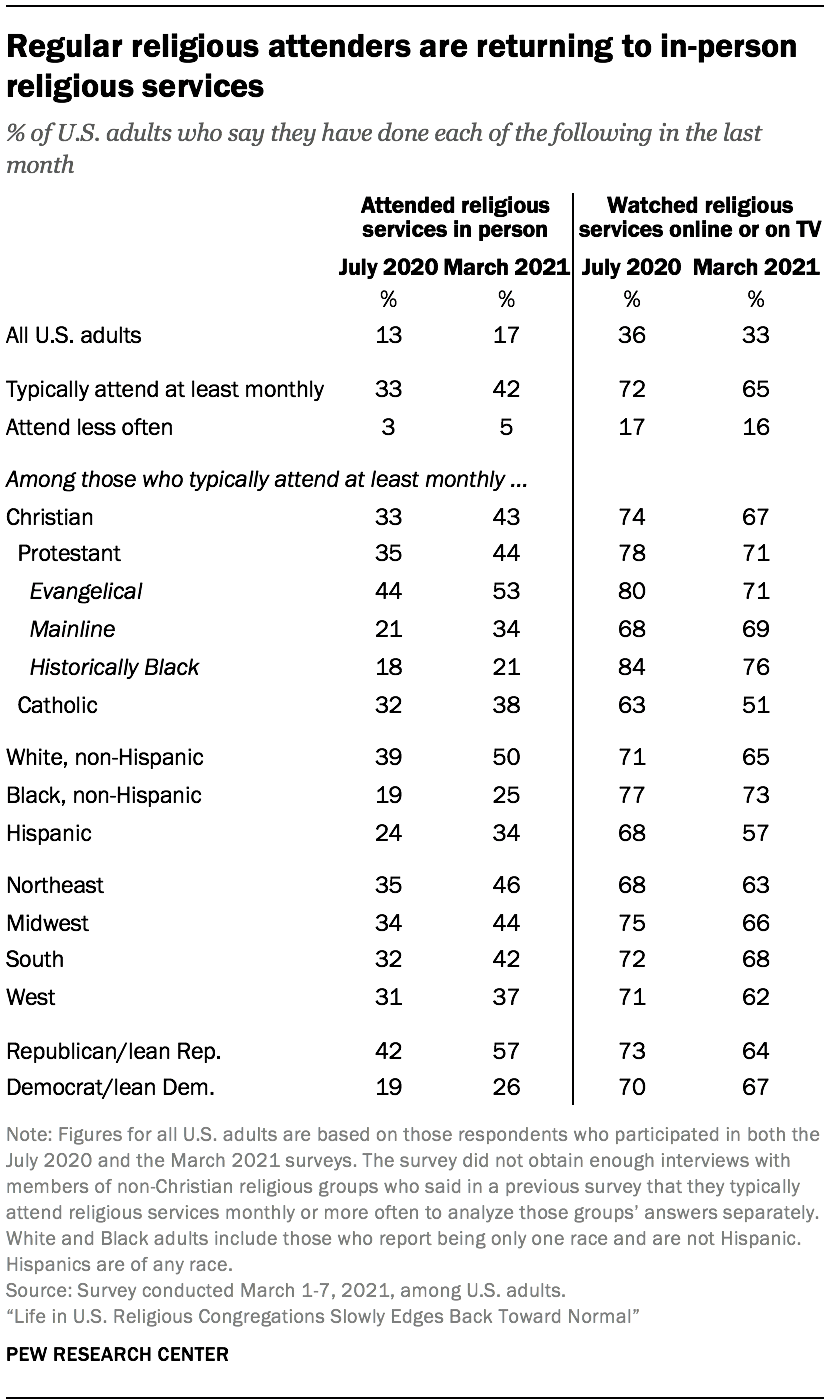 As of early March 2021, 17% of U.S. adults indicate that they have attended religious services in person during the past month, up modestly but significantly from the 13% who said this in July 2020. Among those who said in a prior survey that they typically attend religious services at least monthly, 42% say they have done so over the past month, up from 33% who said this in July 2020.

Roughly half of evangelical Protestants who normally attend church regularly (53%) say they attended religious services in person over the past month. About four-in-ten Catholic attenders (38%) have gone to church recently, as have roughly one-third of mainline Protestants who typically go to services at least once or twice a month (34%). All three of these figures are up since last July.

One-in-five regular churchgoers in the historically Black Protestant tradition say they recently attended religious services in person, lower than among other religious groups analyzed in the survey. But adults in the historically Black Protestant tradition are no less likely than members of other Christian traditions to have watched religious services recently online or on TV. (There were not enough interviews with Jews, Muslims or members of other non-Christian groups who say they normally attend religious services at least monthly to allow for separate analysis of their responses to these survey questions.)

On second Easter of the pandemic, four-in-ten U.S. Christians plan to go to services in person 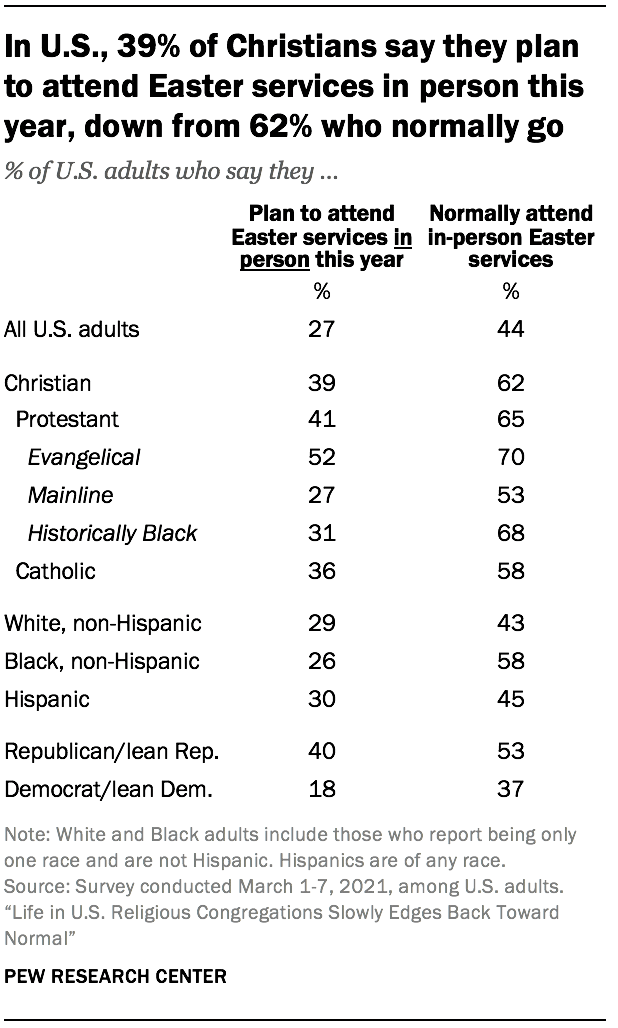 Overall, 62% of U.S. Christians say they normally attend religious services on Easter Sunday. Even one-in-ten religiously unaffiliated Americans (who, by and large, rarely or never go to religious services), say they typically go to church on Easter. But this year, just four-in-ten Christians (39%), along with 5% of adults who do not identify as Christian – equivalent to about a quarter of all U.S. adults (27%) – say they plan to attend Easter services in person.

The gap between what Americans typically do to commemorate Easter and what they plan to do this year is especially striking among members of the historically Black Protestant tradition. In a typical year, roughly two-thirds of people in this group say they would attend Easter services. This year, in stark contrast, only about one-third say they plan to attend church on Easter in person.

Democrats are less likely than Republicans to attend Easter services even in a typical year, partly reflecting the larger shares of religious “nones” (people who describe themselves, religiously, as atheist, agnostic, or “nothing in particular”) and members of non-Christian faiths among Democrats than among Republicans. This year, 40% of Republicans (and those who lean toward the GOP) intend to go to in-person Easter services, compared with 18% of Democrats.

Most who normally attend services say their congregations are open, but with precautions

Members of the historically Black Protestant tradition and mainline Protestants are more likely than people in other large U.S. religious groups to say their congregations remain closed. Evangelical Protestants are more likely than the other groups to say their congregations are open and operating normally, with no coronavirus-related modifications – although still, just one-in-five evangelicals (19%) say this. Catholics stand out for the relatively large numbers who say their churches are open but with virus-related modifications in place. 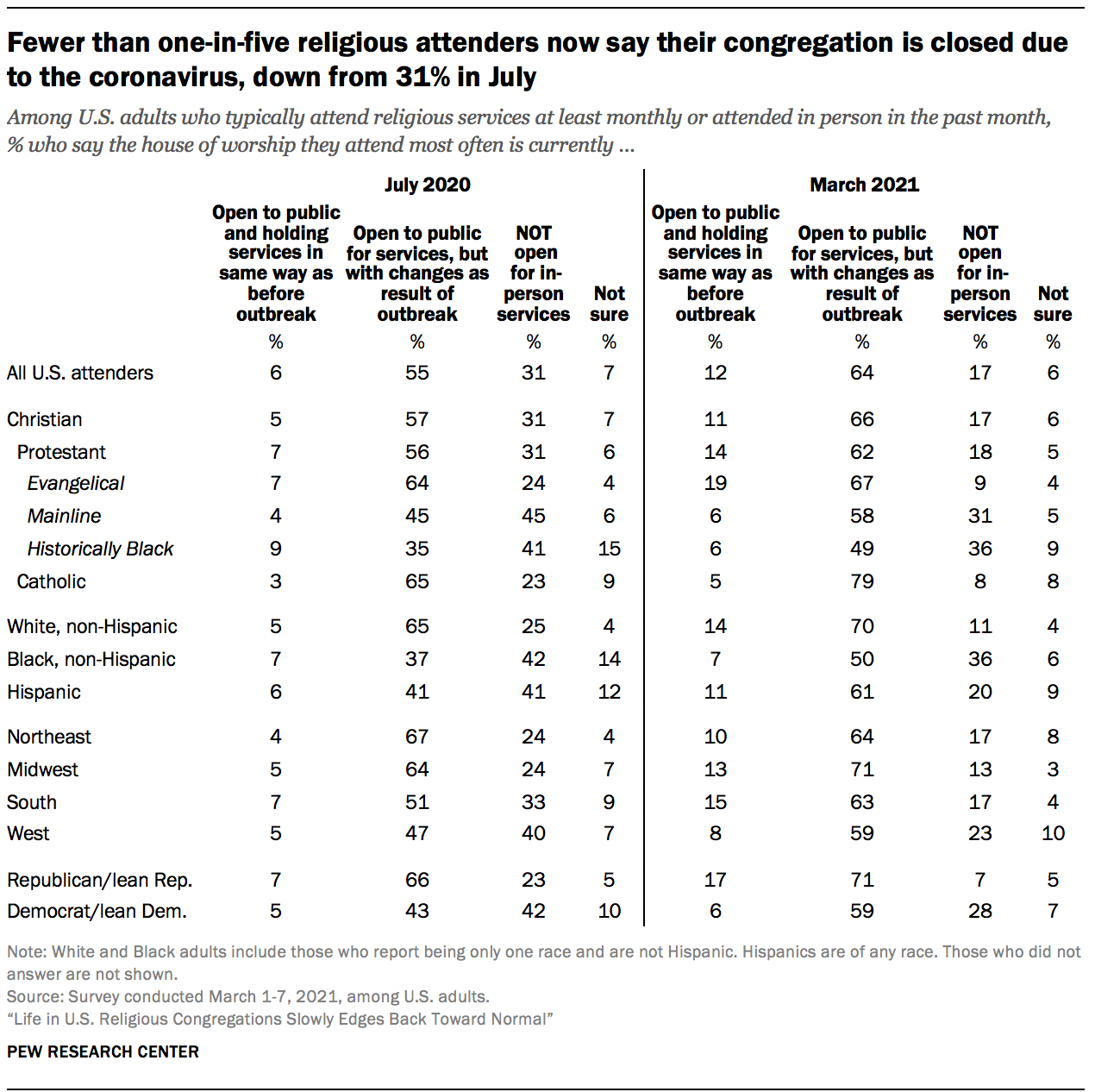 Catholics are more likely than those in other groups to say each of these precautionary measures has been adopted in their parishes. Indeed, seven-in-ten Catholics say their parishes are requiring social distancing and/or mask wearing, and six-in-ten say there are limits on the number of people who can attend Mass at any one time. These patterns reflect the fact that Catholics, more than any other group, say their churches are open but operating with virus-related precautions in place. 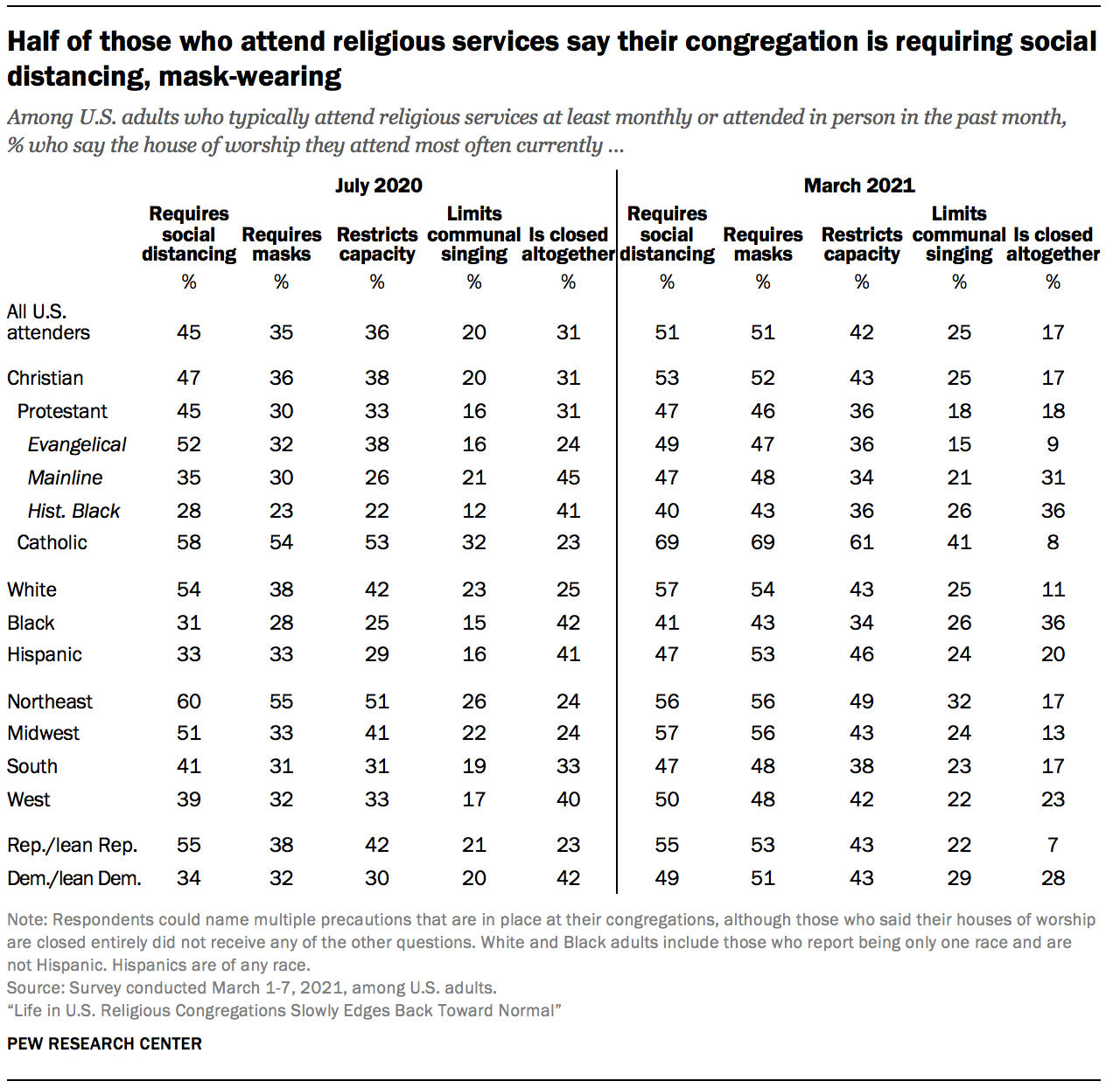 The precautions that are in place in many U.S. congregations are largely in line with the desires of the associated congregants. While the share of religious attenders who think their congregations should be closed altogether has declined since last summer (from 28% to 15%), the majority think that at least some virus-related modifications are in order (58%). One-quarter of U.S. religious attenders are in favor of fully opening up their congregations without any restrictions.

Members of the historically Black Protestant tradition and mainline Protestants are more inclined than evangelical Protestants and Catholics to say their congregations should remain closed for the time being – though this sentiment is down from July 2020 among all these groups, just as it is among religious attenders as a whole. Evangelical Protestants are far more supportive than those in other groups of opening up their congregations; 35% now say their congregations should be operating normally, roughly double the share who said this last summer (18%). Catholics occupy a middle ground and stand out for the relatively high share who say their churches should be open but with precautions in place. 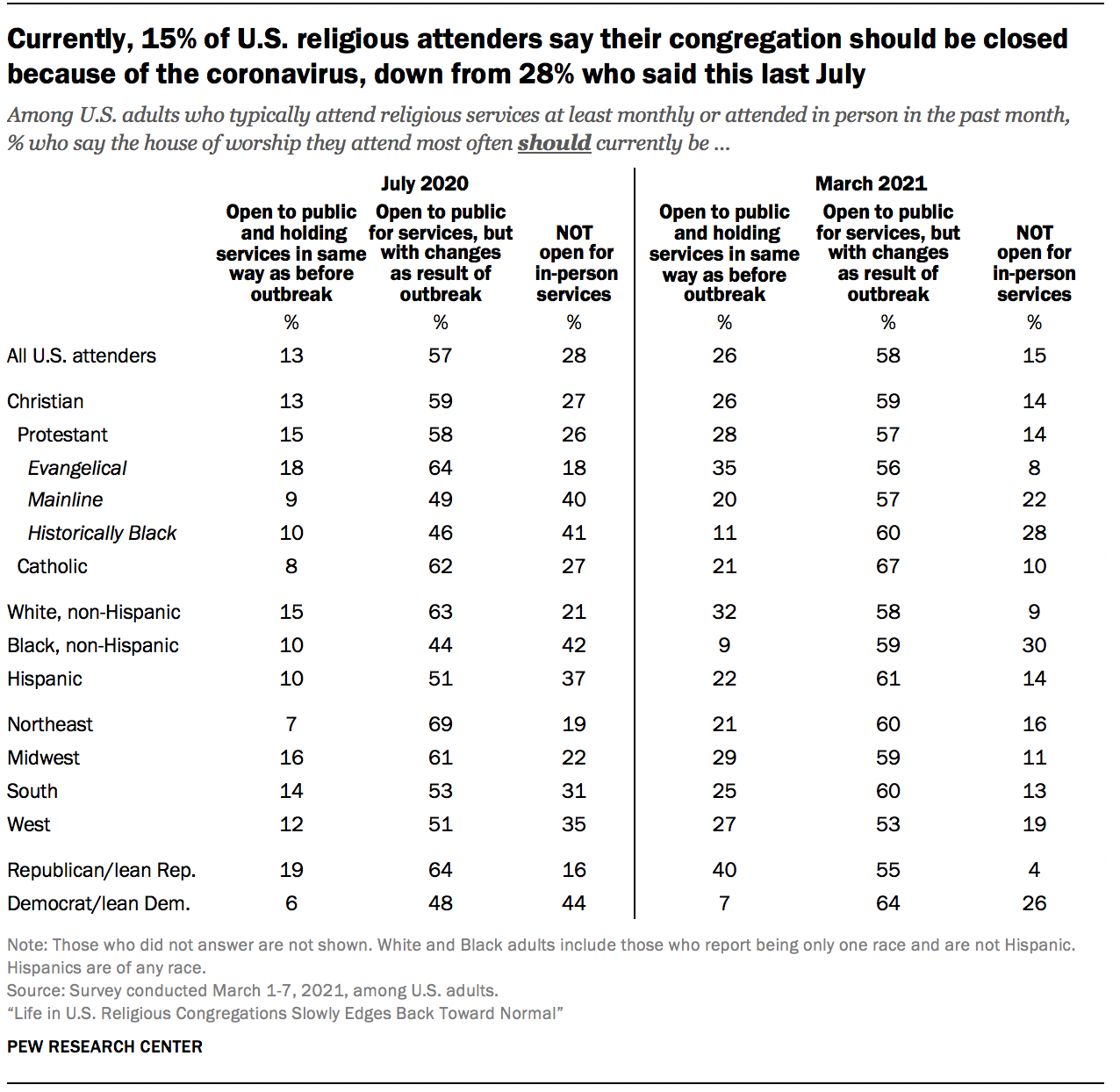 The most common kinds of precautions Americans say they would like their congregations to take are social distancing measures and mask requirements (both 50%). Roughly four-in-ten religious attenders say they support limiting capacity at religious services, and three-in-ten want limits on communal singing. 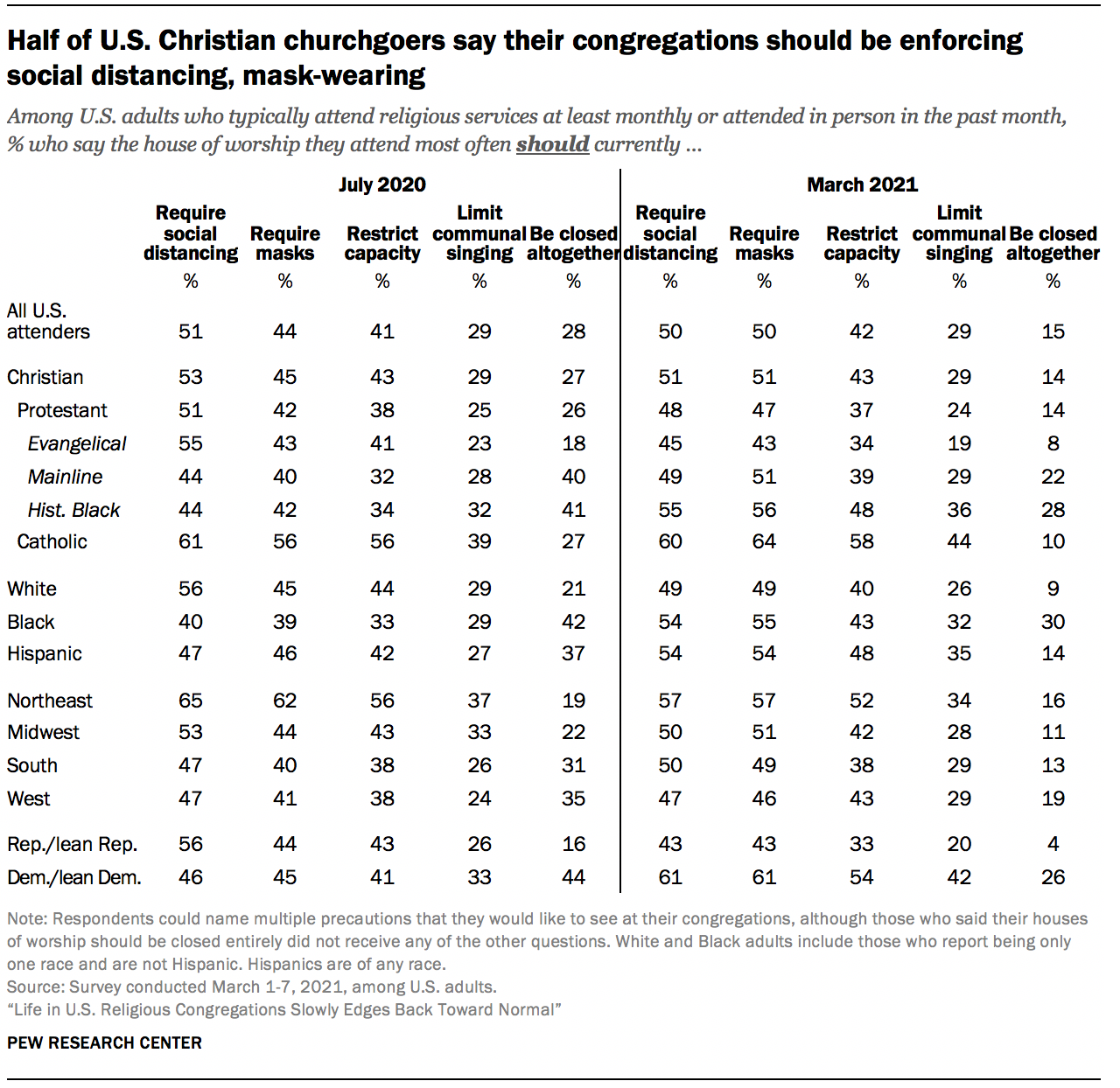 Of course, the new survey was conducted during winter. Outdoor services may have been more common last summer (and may be more common this spring and summer) than they are at present.

Three-quarters of U.S. adults who typically attend religious services (or attended in person in the last month) say they are at least somewhat confident they now could attend services at their congregation safely without catching or spreading the virus, including 45% who are “very” confident and an additional 32% who are “somewhat” confident. This constitutes a significant change since July 2020, when fewer (64%) expressed at least some confidence, including one-third (34%) who were “very” confident they could attend religious services safely. 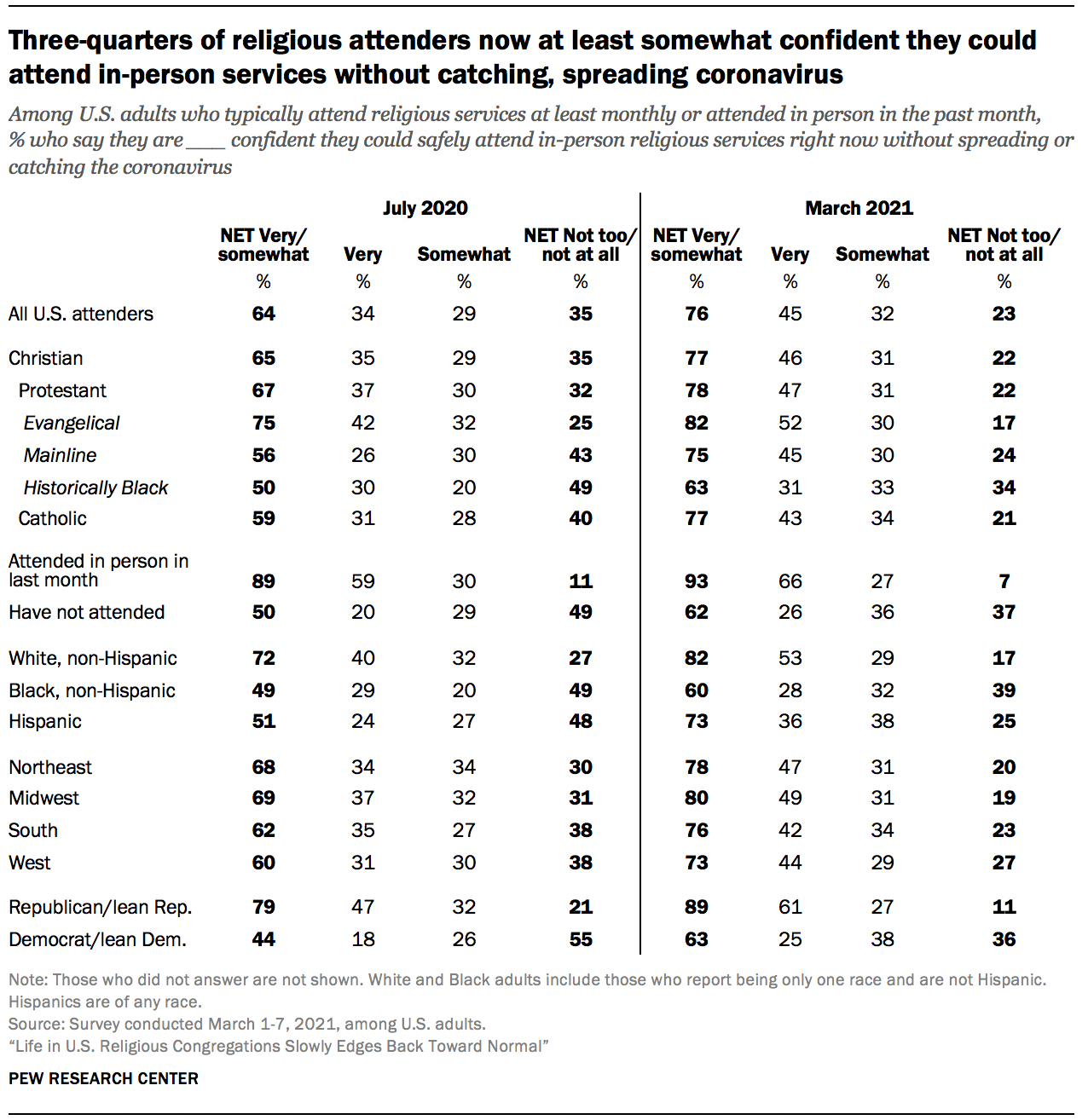 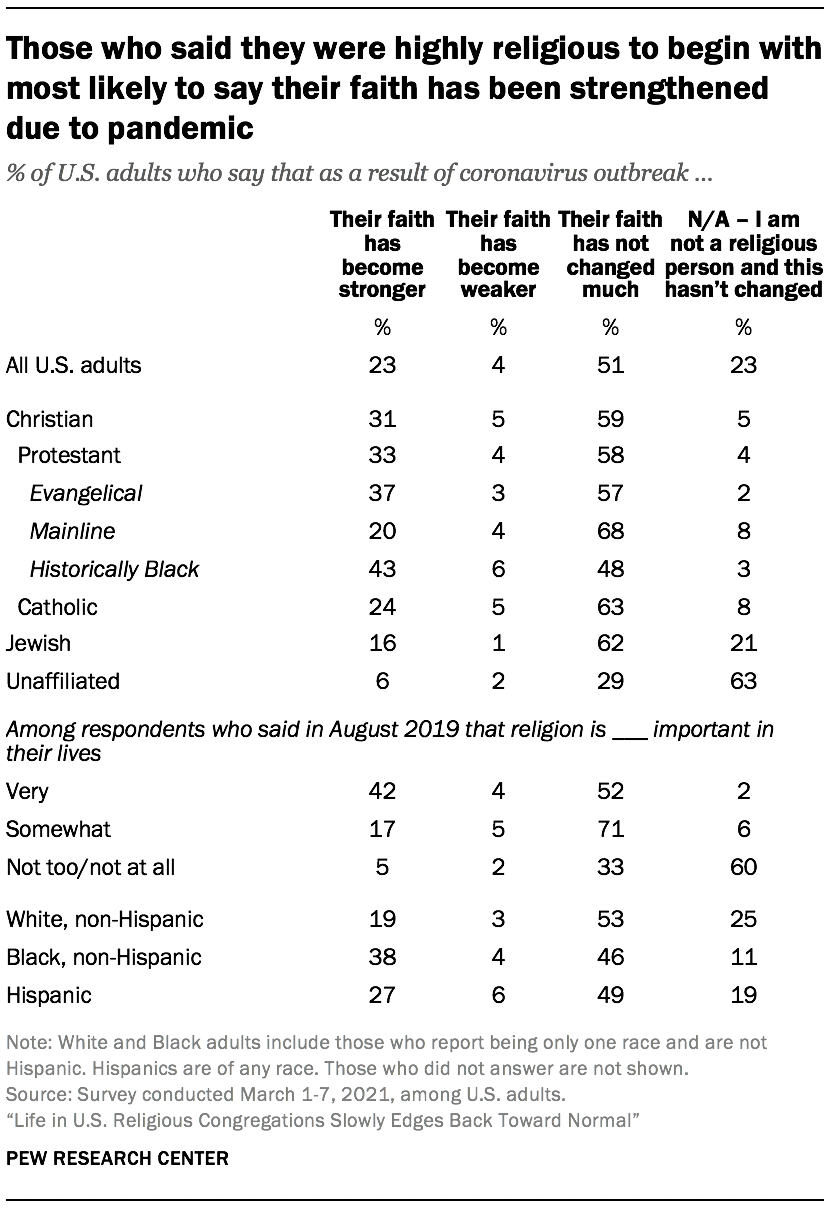 These patterns partly reflect another key finding of the survey. People who were highly religious to begin with, before the coronavirus outbreak in the U.S., are also the most likely to say their faith has grown because of the pandemic. Evangelical Protestants and people in the historically Black Protestant tradition are, on average, among the most highly religious groups in the U.S. population, while the religiously unaffiliated are among the least religious by a variety of conventional measures, including the self-assessed importance of religion in their lives.