Pew Research Center conducted this survey to measure what Americans know and think about the religious faith of Joe Biden and Kamala Harris. The study also explores Catholics’ attitudes about whether Catholic politicians – including Joe Biden – should be barred from receiving Communion if they disagree with the Catholic Church’s teachings about a variety of political issues. For this report, we surveyed 12,055 U.S. adults (including 2,492 Catholics) from March 1 to 7, 2021. All respondents to the survey are part of the Center’s American Trends Panel (ATP), an online survey panel that is recruited through national random sampling of residential addresses. This way nearly all U.S. adults have a chance of selection. The survey is weighted to be representative of the U.S. adult population by gender, race, ethnicity, partisan affiliation, education, religious affiliation and other categories. For more, see the ATP’s methodology and the methodology for this report.

Joe Biden is just the second Catholic president in U.S. history, after John F. Kennedy. Most U.S. adults know that Biden is Catholic, including majorities within both major political parties, according to a new Pew Research Center survey.

But partisan similarities in views about Biden’s religion end there. Republicans and Democrats have vastly different views about how religious Biden is and whether he talks about his religious faith too much, too little or the right amount. This political divide extends even to Biden’s fellow Catholics, who are deeply split along party lines over whether Biden’s views about abortion should disqualify him from receiving Communion.

Overall, roughly six-in-ten U.S. adults – including 63% of Democrats and independents who lean toward the Democratic Party, along with a slightly smaller majority of Republicans and Republican leaners (55%) – say Joe Biden is Catholic. Most of the remainder say they are not sure what Biden’s religion is, while about one-in-ten say that Biden practices a religion other than Catholicism or that he is not religious. A small handful of Republicans volunteer that Biden is a “fake Catholic” or a “Catholic in name only,” or offer other insulting comments.

While majorities in both parties know that Biden is Catholic, they disagree profoundly about the role of religion in his private and public life. Nearly nine-in-ten Democrats say that Biden is at least “somewhat” religious, including 45% who say they think he is a “very” religious person. By contrast, almost two-thirds of people who identify with or lean toward the GOP (63%) say that Biden is “not too” or “not at all” religious. 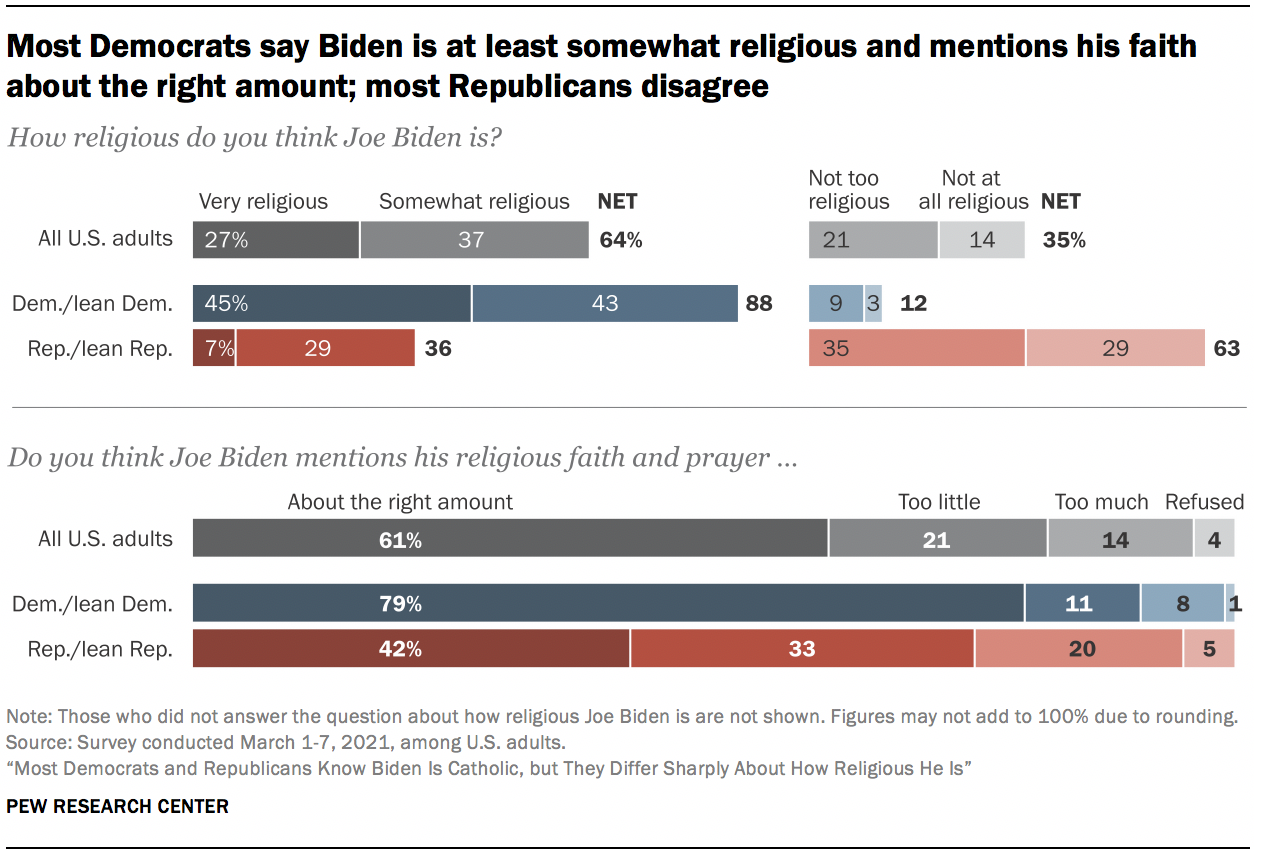 It is possible that Democrats heard Biden talking about his faith on the campaign trail and since his election. Religion has been a consistent theme in his remarks in recent months, from the Democratic National Convention to his victory speech in November to his inauguration in January.

While eight-in-ten Democrats (79%) say Joe Biden mentions his religious faith and prayer about the right amount, fewer than half of Republicans (42%) agree.

Even among Biden’s fellow Catholics, partisanship permeates views of Biden’s religion. Nine-in-ten Democratic and Democratic-leaning Catholics say they think Biden is at least somewhat religious, including half who say he is “very” religious. Among Republican and Republican-leaning Catholics, by contrast, a 56% majority say Biden is “not too” or “not at all” religious. And while eight-in-ten Catholic Democrats say they think Biden discusses his faith “about the right amount,” barely half as many Catholic Republicans say the same (42%).

The survey finds, furthermore, that a slim majority of Catholic Republicans (55%) think that Biden’s views about abortion should disqualify him from receiving Communion in the Catholic Church. But nearly nine-in-ten Catholic Democrats (87%) come down on the other side of this question, saying that Biden should be allowed to receive the Eucharist. Biden has said that he wants to make Roe v. Wade, the landmark 1973 Supreme Court decision that established a woman’s right to an abortion nationwide, the “law of the land,” among other policy changes. As a result, some Catholic clergy have called for Biden to be denied Communion, and U.S. bishops may produce a document on the issue. 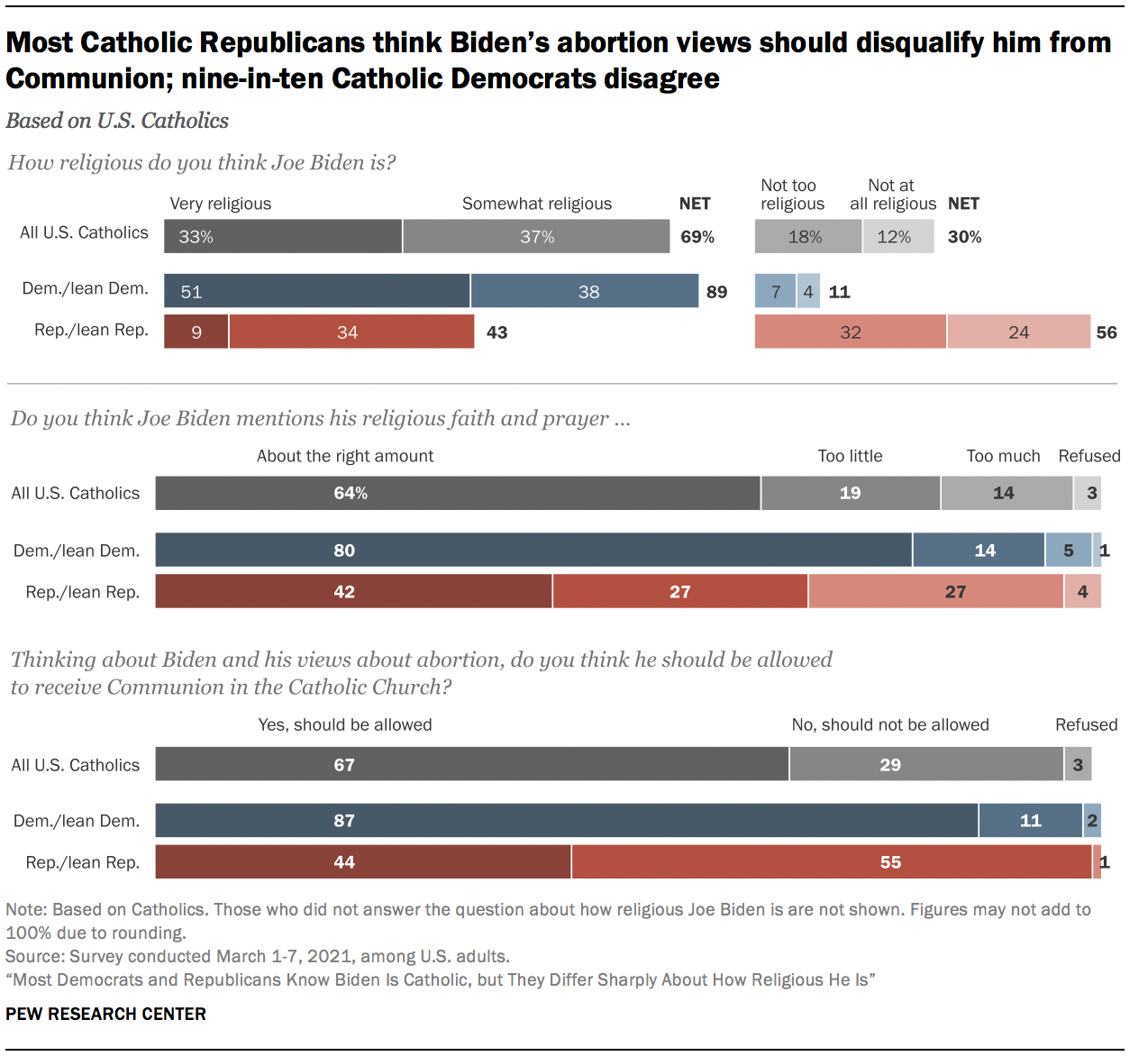 These are among the key findings of a new Pew Research Center survey conducted March 1-7, 2021, among 12,055 U.S. adults (including 2,492 Catholics) on the Center’s online, nationally representative American Trends Panel. More information on how the survey was conducted is available in the methodology. 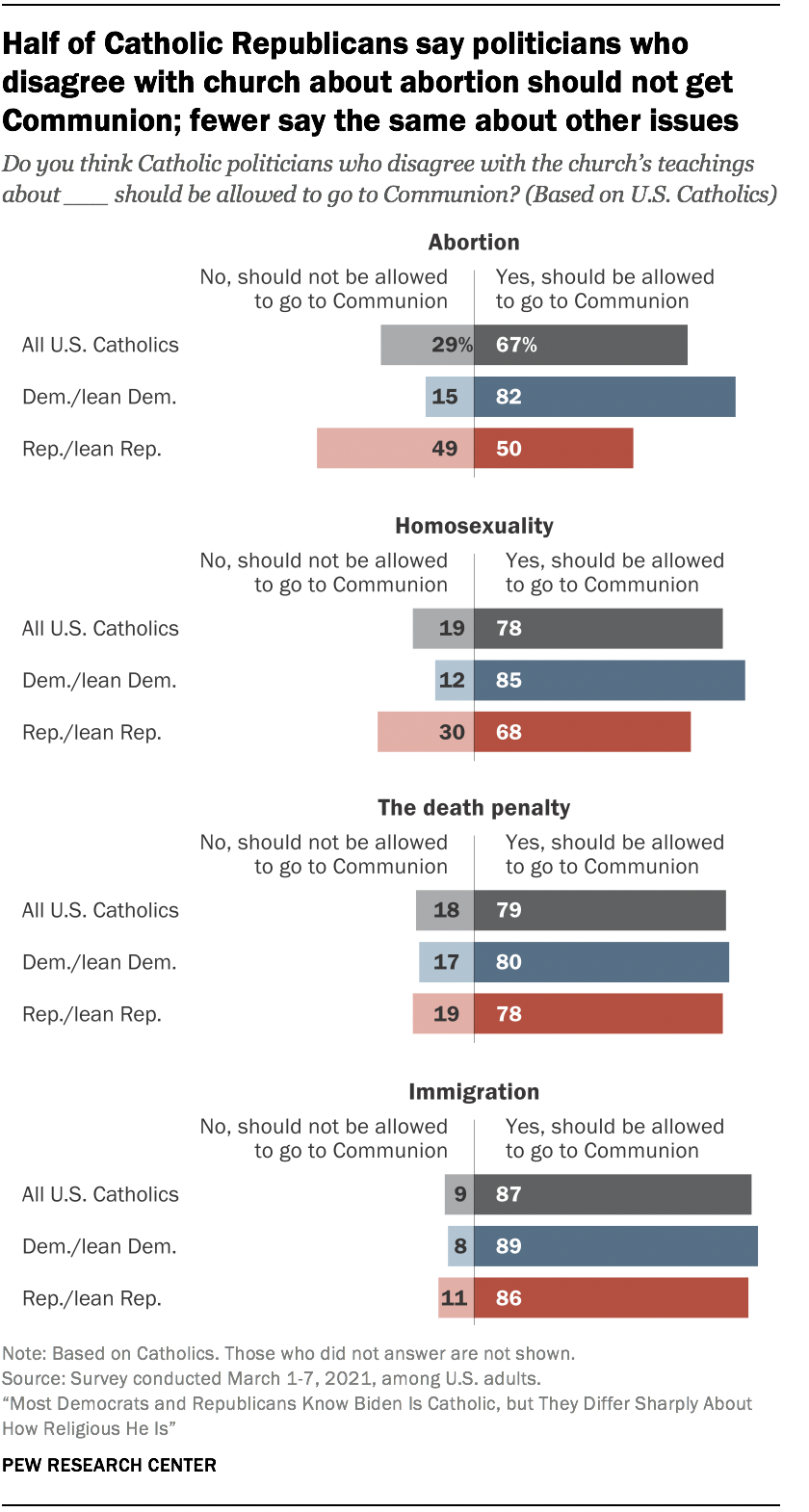 There are big partisan differences over whether politicians’ views about abortion and homosexuality should make them ineligible for Communion. (Both of these are issues on which Catholic teaching might be described as “conservative” in the context of American politics.) Roughly half of Catholic Republicans (49%) say politicians who support legal abortion should not be able to receive the sacrament; just 15% of Catholic Democrats agree. And there is a partisan gap of 18 percentage points on the question about homosexuality: 30% of Catholic Republicans say politicians should be barred from Communion if they disagree with the church about homosexuality, compared with just 12% of Catholic Democrats who say the same.

On the other two issues raised in the survey – the death penalty and immigration, where Catholic teaching might best be described as “liberal” within the U.S. political context – there are no such partisan differences. Large majorities of Catholics in both parties say that Catholic politicians who disagree with the church about these issues should be able to present themselves for Communion. 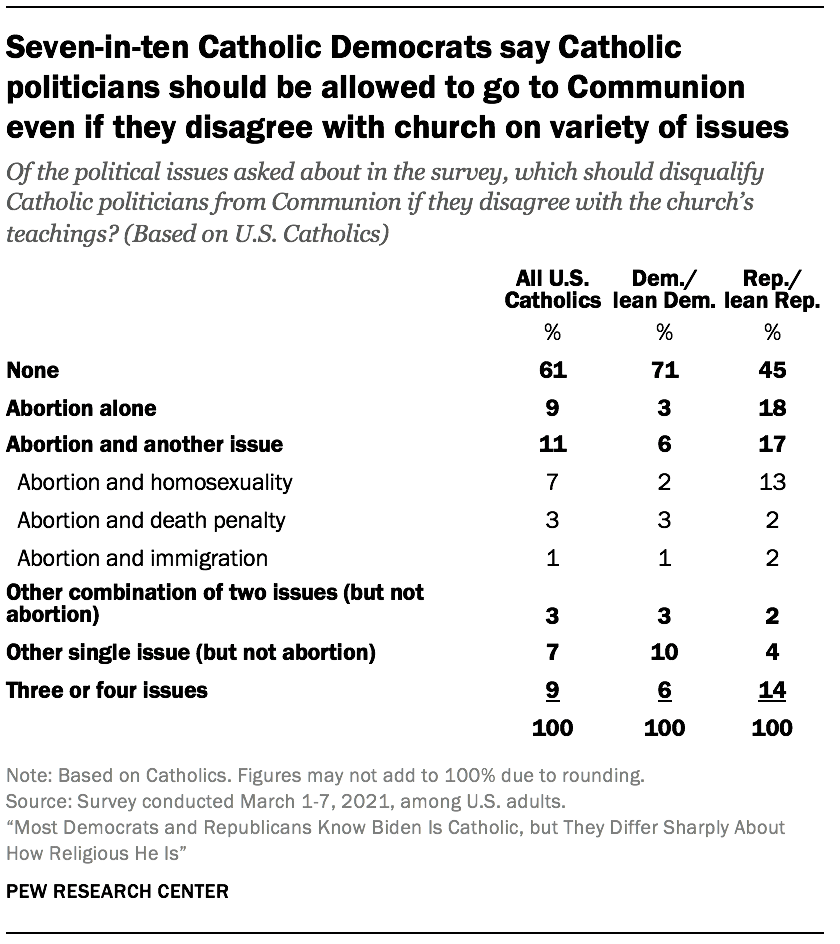 Combining these questions shows that seven-in-ten Catholic Democrats don’t think disagreeing with the church about any of the four issues raised by the survey should disqualify Catholic politicians from receiving Communion.

By contrast, most Republicans say they think it should be disqualifying if a Catholic politician disagrees with the church on at least one of these issues. This includes 18% of Catholic Republicans who think abortion is the sole issue of those presented by the survey that should be a litmus test for receiving Communion, along with 17% of Republicans who name both abortion and one other issue (usually homosexuality). An additional 14% of Catholic Republicans say that three or four of these issues should be grounds for disqualifying Catholic politicians from receiving Communion in the event of a disagreement with the church.

Most U.S. adults do not know Vice President Harris’ religion

About half of U.S. adults say they think Harris is a “very religious” (8%) or “somewhat religious” person (38%), while the other half say that she is “not too religious” (28%) or “not at all religious” (23%). Again, Democrats are far more likely than Republicans to see Harris as at least somewhat religious (69% vs. 19%), although equal shares in both parties say they do not know what Harris’ religion is (64% each).

The remainder of this report explores these and other findings in more detail.

Two-thirds of U.S. Catholics, including three-quarters of White Catholics, know that Joe Biden shares their religious identity. Three-quarters of U.S. Jews also know that Biden is Catholic, as do two-thirds of self-described atheists and agnostics. Among Black Protestants and those who describe their religion as “nothing in particular,” roughly half or fewer are able to identify Biden’s religion. 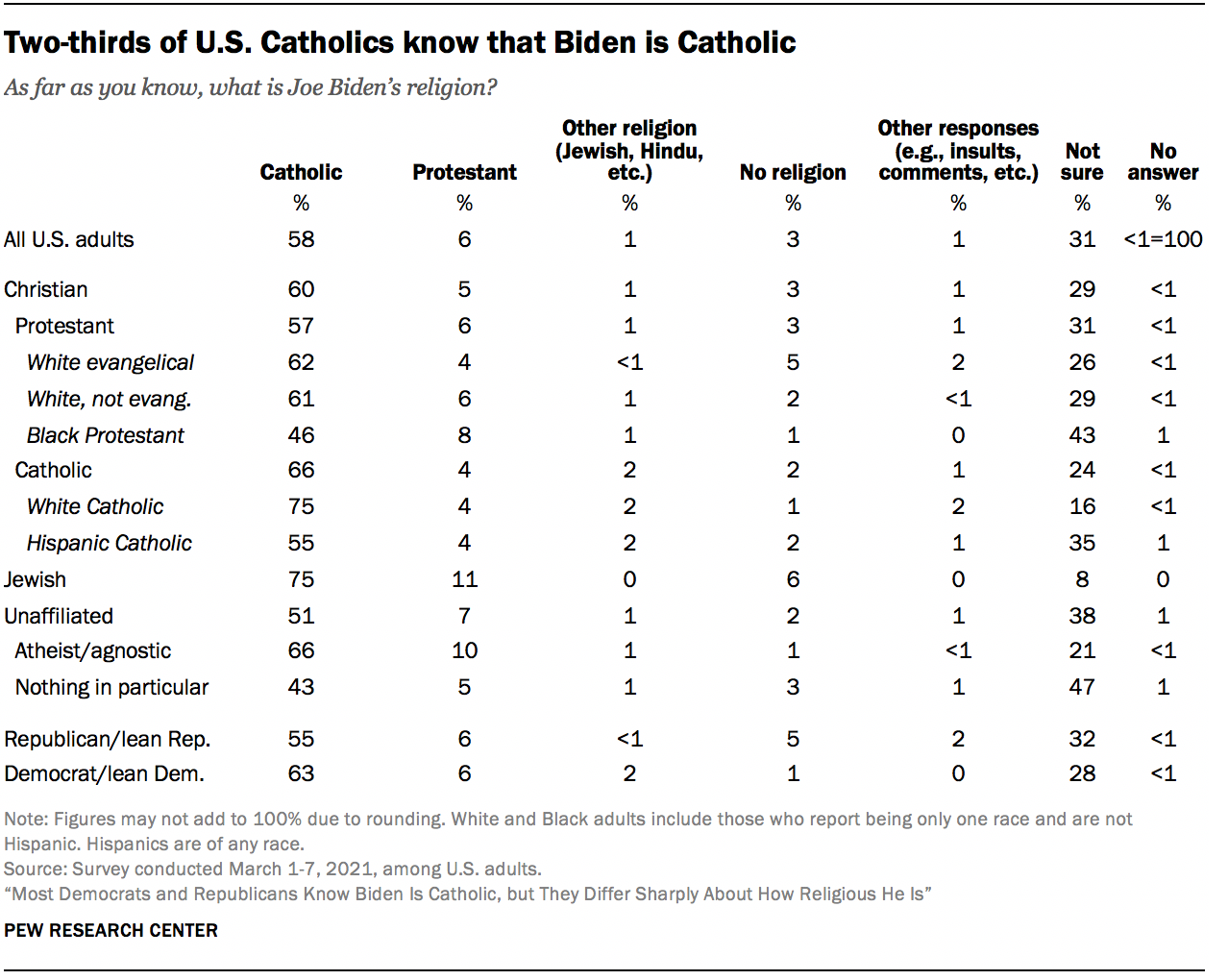 Americans are far less familiar with Kamala Harris’ religion than with Biden’s. Overall, about two-thirds of U.S. adults (65%) say they are not sure what the vice president’s religion is. One-in-eight (12%) correctly describe Harris as Protestant, while 3% say she is Hindu. Harris’ mother was from India and her father was from Jamaica, and “she was raised on Hinduism and Christianity,” according to Religion News Service.

Majorities across a wide variety of religious groups say they are not sure what Harris’ religion is. Jews, Black Protestants and self-described atheists and agnostics are able to correctly identify Harris’ religion at slightly higher rates than those in some other religious groups. Still, even among these most knowledgeable groups, only about one-in-five know that Harris is Protestant. 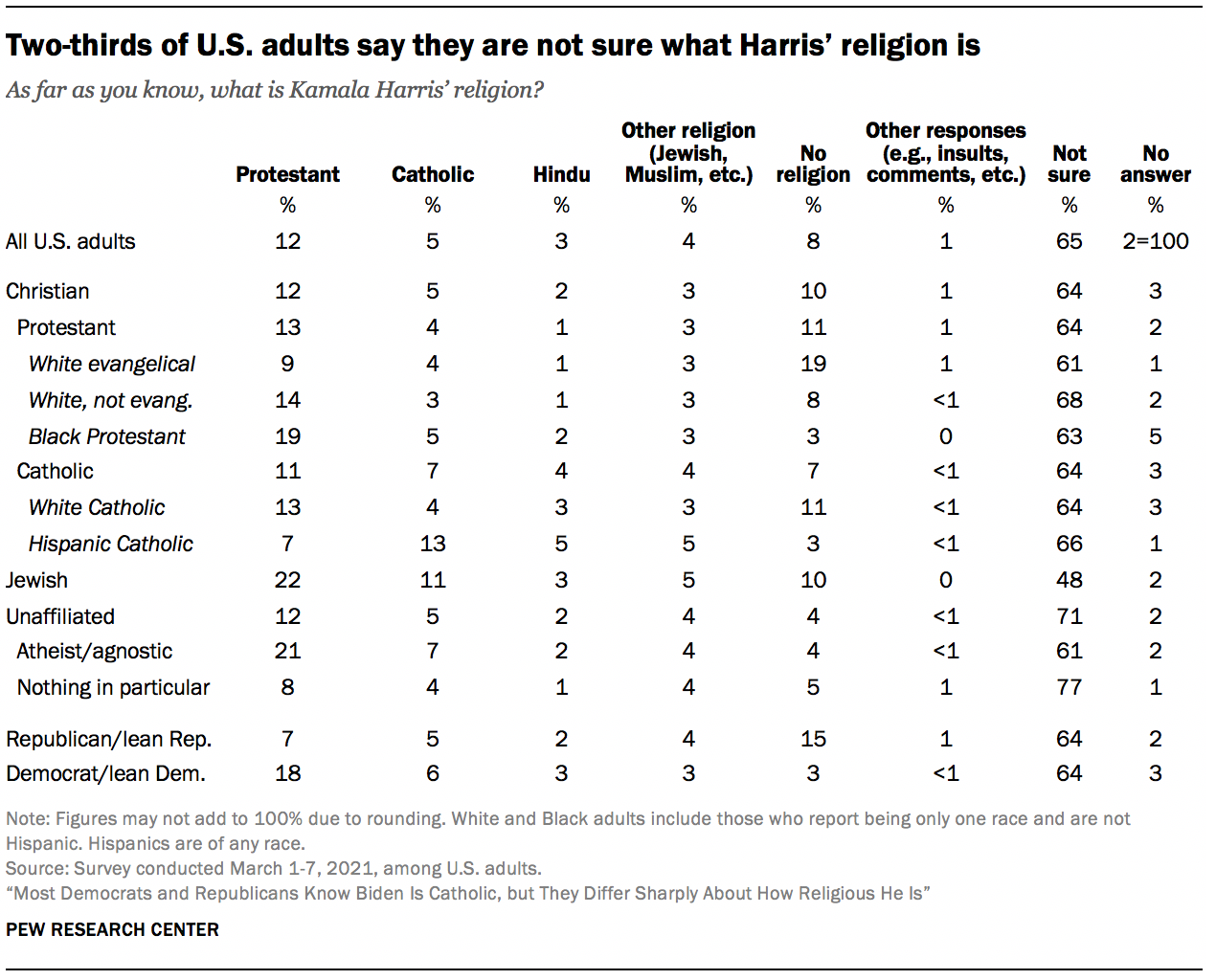 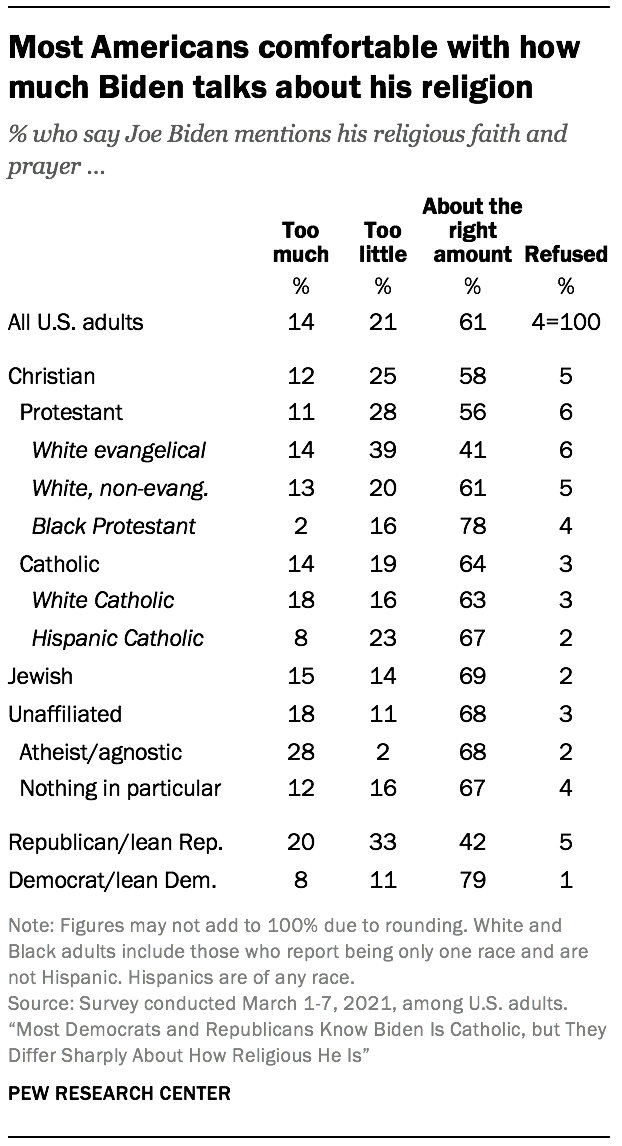 Six-in-ten U.S. adults say they think Biden mentions his religious faith and prayer “about the right amount,” while the remainder are divided as to whether he discusses his faith “too much” (14%) or “too little” (21%).

Majorities of people in nearly every religious group analyzed express the view that Biden discusses his religion the appropriate amount, topping out at 78% among Black Protestants. White evangelicals are the only group in which fewer than half of respondents say Biden discusses his faith “about the right amount” (41%); a similar share (39%) say Biden doesn’t talk about his faith enough.

Respondents who identify as atheist or agnostic are more likely than other Americans to say Biden discusses his faith too much (28%), but still, two-thirds in this group say Biden talks about religion the right amount (68%).

Four-in-ten weekly Mass attenders say Biden, other politicians who disagree with the Catholic Church about abortion should not be allowed to go to Communion

U.S. Catholics who attend Mass at least once a week are considerably more likely than those who attend Mass less often to say that politicians who disagree with the church’s position on abortion should be ineligible for Communion (42% vs. 24%). Weekly churchgoers also are more inclined than other Catholics to say disagreements over homosexuality and the death penalty are cause for barring politicians from the Eucharist. But there are no differences among Catholics based on frequency of church attendance when it comes to whether politicians who disagree with the church about immigration should be able to receive Communion. 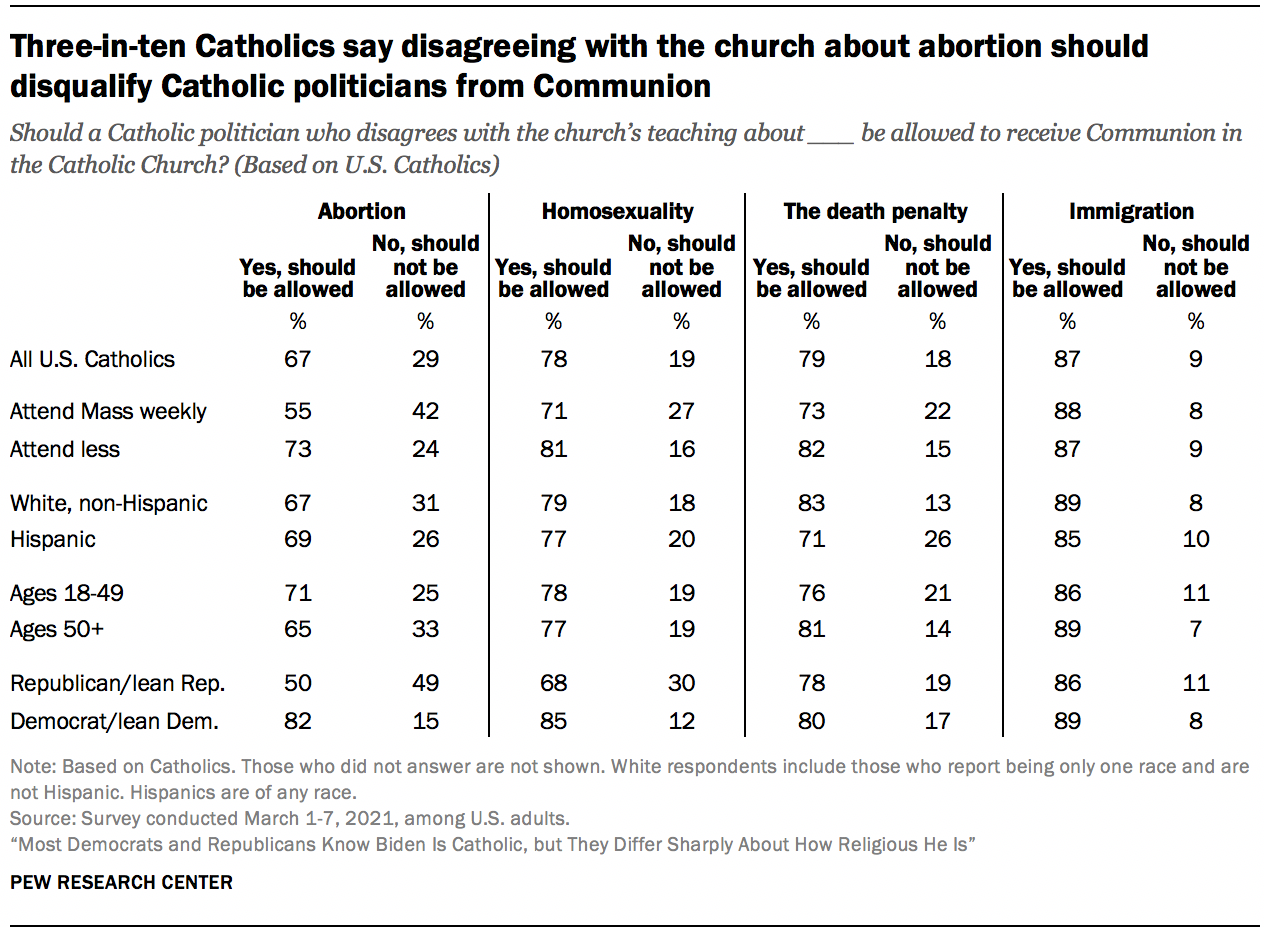 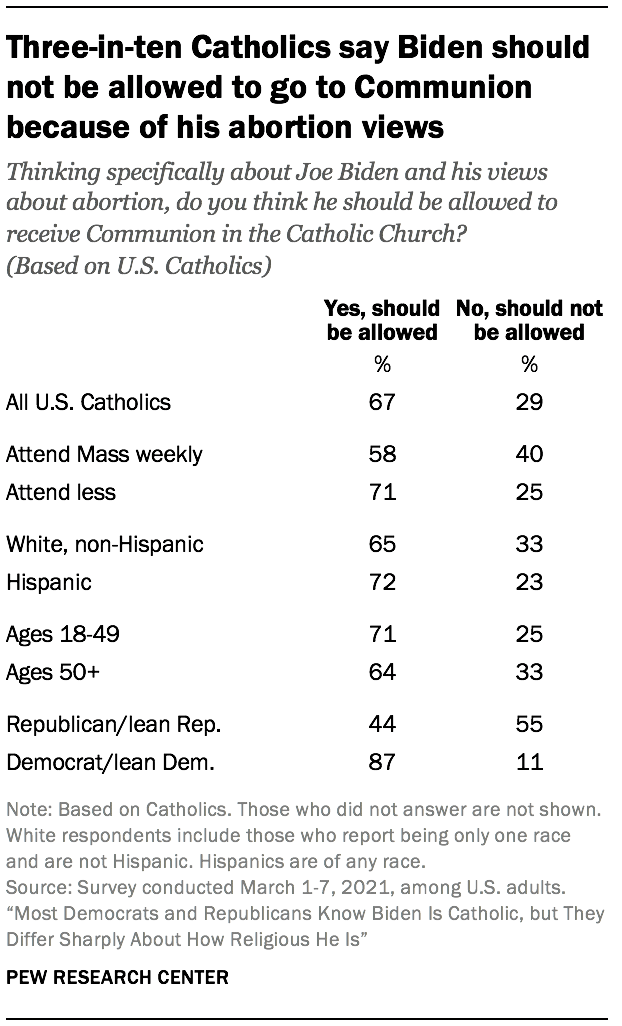 More specifically, four-in-ten Catholics who attend Mass at least once a week say that Biden’s views about abortion should disqualify him from receiving the Eucharist – 15 points higher than the share who say this among those who attend Mass less often. White Catholics and those 50 and older are somewhat more inclined than Hispanic Catholics and those under 50 to say Biden should not be allowed to go to Communion.