The caste system has existed in some form in India for at least 3,000 years. It is a social hierarchy passed down through families, and it can dictate the professions a person can work in as well as aspects of their social lives, including whom they can marry. While the caste system originally was for Hindus, nearly all Indians today identify with a caste, regardless of their religion.

The survey finds that three-in-ten Indians (30%) identify themselves as members of General Category castes, a broad grouping at the top of India’s caste system that includes numerous hierarchies and sub-hierarchies. The highest caste within the General Category is Brahmin, historically the priests and other religious leaders who also served as educators. Just 4% of Indians today identify as Brahmin.

Most Indians say they are outside this General Category group, describing themselves as members of Scheduled Castes (often known as Dalits, or historically by the pejorative term “untouchables”), Scheduled Tribes or Other Backward Classes (including a small percentage who say they are part of Most Backward Classes).

Hindus mirror the general public in their caste composition. Meanwhile, an overwhelming majority of Buddhists say they are Dalits, while about three-quarters of Jains identify as members of General Category castes. Muslims and Sikhs – like Jains – are more likely than Hindus to belong to General Category castes. And about a quarter of Christians belong to Scheduled Tribes, a far larger share than among any other religious community.

Caste segregation remains prevalent in India. For example, a substantial share of Brahmins say they would not be willing to accept a person who belongs to a Scheduled Caste as a neighbor. But most Indians do not feel there is a lot of caste discrimination in the country, and two-thirds of those who identify with Scheduled Castes or Tribes say there is not widespread discrimination against their respective groups. This feeling may reflect personal experience: 82% of Indians say they have not personally faced discrimination based on their caste in the year prior to taking the survey.

Still, Indians conduct their social lives largely within caste hierarchies. A majority of Indians say that their close friends are mostly members of their own caste, including roughly one-quarter (24%) who say all their close friends are from their caste. And most people say it is very important to stop both men and women in their community from marrying into other castes, although this view varies widely by region. For example, roughly eight-in-ten Indians in the Central region (82%) say it is very important to stop inter-caste marriages for men, compared with just 35% in the South who feel strongly about stopping such marriages.

Hindu caste distribution roughly mirrors that of the population overall, but other religions differ considerably. For example, a majority of Jains (76%) are members of General Category castes, while nearly nine-in-ten Buddhists (89%) are Dalits. Muslims disproportionately identify with non-Brahmin General Castes (46%) or Other/Most Backward Classes (43%).

Caste classification is in part based on economic hierarchy, which continues today to some extent. Highly educated Indians are more likely than those with less education to be in the General Category, while those with no education are most likely to identify as OBC.

But financial hardship isn’t strongly correlated with caste identification. Respondents who say they were unable to afford food, housing or medical care at some point in the last year are only slightly more likely than others to say they are Scheduled Caste/Tribe (37% vs. 31%), and slightly less likely to say they are from General Category castes (27% vs. 33%). 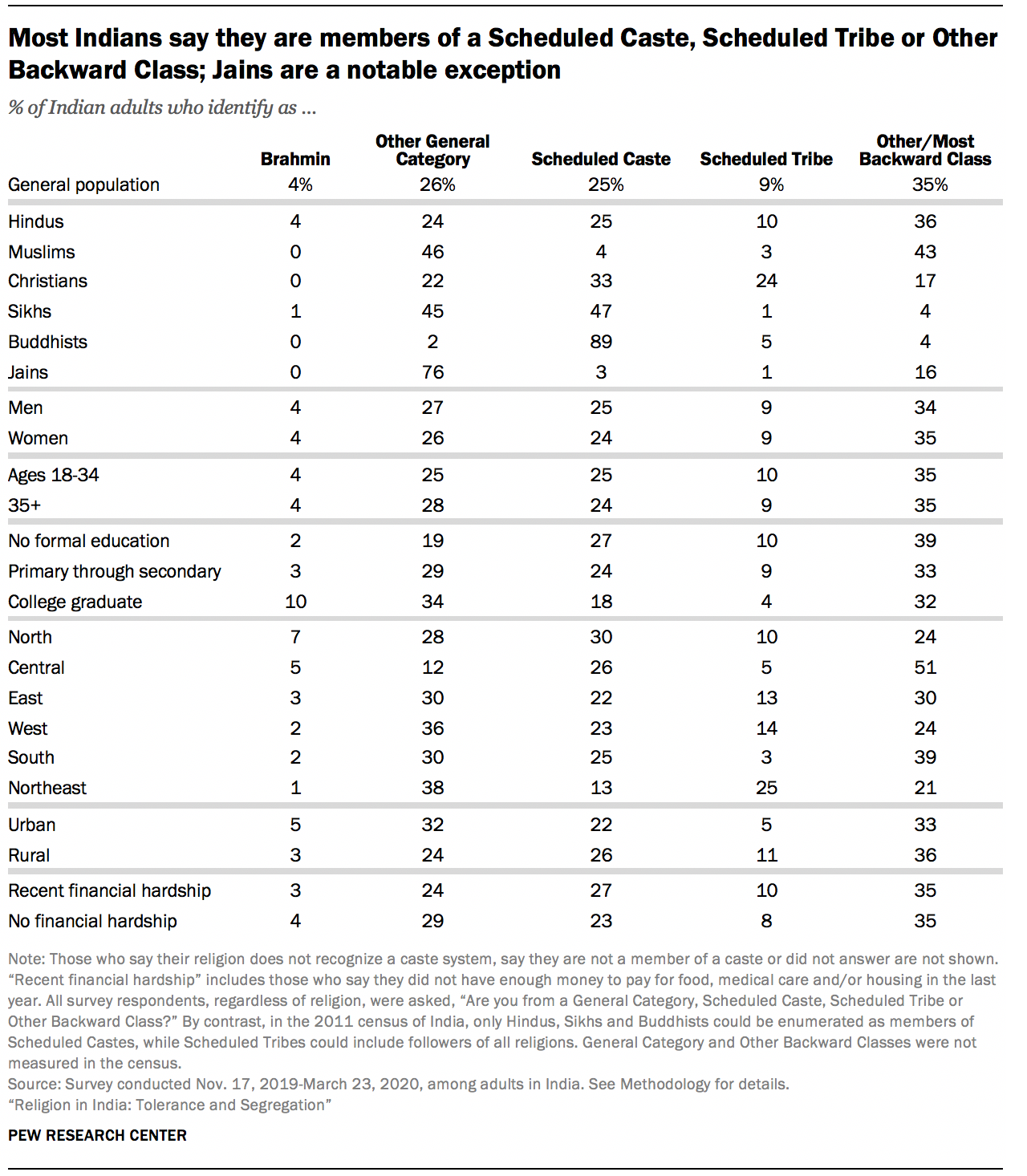 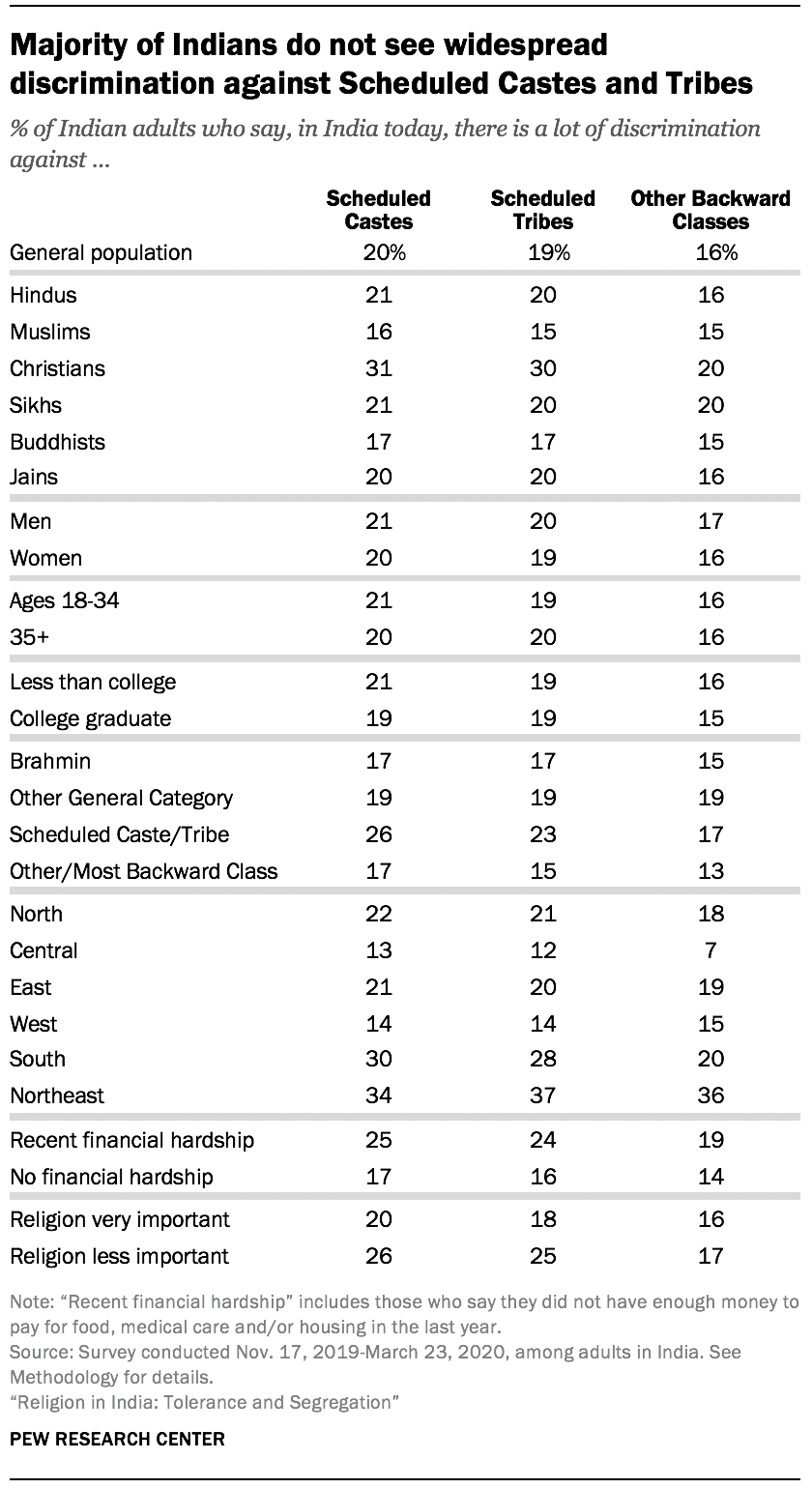 Christians are more likely than other religious groups to say there is a lot of discrimination against Scheduled Castes and Scheduled Tribes in India: About three-in-ten Christians say each group faces widespread discrimination, compared with about one-in-five or fewer among Hindus and other groups.

Highly religious Indians – that is, those who say religion is very important in their lives – tend to see less evidence of discrimination against Scheduled Castes and Tribes. Meanwhile, those who have experienced recent financial hardship are more inclined to see widespread caste discrimination.

Most Indians do not have recent experience with caste discrimination

Jains, the vast majority of whom are members of General Category castes, are less likely than other religious groups to say they have personally faced caste discrimination (3%). Meanwhile, Indians who indicate they have faced recent financial hardship are more likely than those who have not faced such hardship to report caste discrimination in the last year (20% vs. 10%).

Among those who received the question, large majorities of Christians (83%) and Sikhs (77%) say they would accept Dalit neighbors. But a substantial portion of Jains, most of whom identify as belonging to General Category castes, feel differently; about four-in-ten Jains (41%) say that they would not be willing to accept Dalits as neighbors. (Because more than nine-in-ten Buddhists say they are members of Scheduled Castes or Scheduled Tribes, not enough Buddhists were asked this question to allow for separate analysis of their answers.)

About three-in-ten Brahmins (29%) say they would not be willing to accept members of Scheduled Castes as neighbors.

In most regions, at least two-thirds of people express willingness to accept Scheduled Caste neighbors. The Northeast, however, stands out, with roughly equal shares saying they would (41%) or would not (39%) be willing to accept Dalits as neighbors, although this region also has the highest share of respondents – 20% – who gave an unclear answer or declined to answer the question.

Indians who live in urban areas (78%) are more likely than rural Indians (69%) to say they would be willing to accept Scheduled Caste neighbors. And Indians with more education also are more likely to accept Dalit neighbors. Fully 77% of those with a college degree say they would be fine with neighbors from Scheduled Castes, while 68% of Indians with no formal education say the same.

Indians generally do not have many close friends in different castes

Indians may be comfortable living in the same neighborhoods as people of different castes, but they tend to make close friends within their own caste. About one-quarter (24%) of Indians say all their close friends belong to their caste, and 46% say most of their friends are from their caste.

About three-quarters of Muslims and Sikhs say that all or most of their friends share their caste (76% and 74%, respectively). Christians and Buddhists – who disproportionately belong to lower castes – tend to have somewhat more mixed friend circles. Nearly four-in-ten Buddhists (39%) and a third of Christians (34%) say “some,” “hardly any” or “none” of their close friends share their caste background.

Members of OBCs are also somewhat more likely than other castes to have a mixed friend circle. About one-third of OBCs (32%) say no more than “some” of their friends are members of their caste, compared with roughly one-quarter of all other castes who say this.

Women, Indian adults without a college education and those who say religion is very important in their lives are more likely to say that all their close friends are of the same caste as them. And, regionally, 45% of Indians in the Northeast say all their friends are part of their caste, while in the South, fewer than one-in-five (17%) say the same.

Large shares of Indians say men, women should be stopped from marrying outside of their caste

Regionally, in the Central part of the country, at least eight-in-ten adults say it is very important to stop both men and women from marrying members of different castes. By contrast, fewer people in the South (just over one-third) say stopping inter-caste marriage is a high priority. And those who live in rural areas of India are significantly more likely than urban dwellers to say it is very important to stop these marriages.

CORRECTION (August 2021): A previous version of this chapter contained an incorrect figure. The share of Indians who identify themselves as members of lower castes is 68%, not 69%.