Several of India’s most widely practiced religions include strict dietary laws. For instance, Islamic teachings have guidelines for halal eating, forbidding the consumption of pork and other products. Many Jains avoid not only meat but also root vegetables to avoid destroying the entire plant, which is seen as a form of violence in Jain theology. And restrictions on beef consumption and cow slaughter, linked with the Hindu concept of cows as sacred animals, have become a politically charged topic in India.

The survey finds that about four-in-ten Indian adults say they are vegetarian. And many others restrict meat in their diet in some way, either by abstaining from eating certain meats, by abstaining from eating meat on certain days, or both. Altogether, about eight-in-ten Indian adults limit their meat consumption in some manner, including majorities in all major religious groups. Jains (97%) are the most likely to restrict meat in their diet, while Muslims (67%) and Christians (66%) are the least likely.

Many Hindus and Jains also say they won’t eat food in places where the rules around diet are different from what they personally follow. For example, 51% of Hindus and an even larger share of Jains (72%) say they would never eat food in the home of someone whose religion has different rules about food than theirs. Buddhists (37%), Muslims (33%) and Christians (28%) are much less likely to say they would avoid eating food in these circumstances.

Hindu dietary restrictions are closely tied to religious observance in India. For example, highly religious Hindus are more likely to say they are vegetarians. And eating habits also differ by region. For example, a majority of Hindus in the Western (57%), Central (61%) and Northern (71%) regions say they are vegetarians, but far fewer in the East (18%), Northeast (19%) and South (30%) follow a vegetarian diet. And vegetarian Hindus in the South are more likely to say they would eat in the home of a non-vegetarian neighbor or friend (67%) than are vegetarian Hindus nationally (39%).

Most Indians are not vegetarians, but majorities do follow at least some restrictions on meat in their diet

The majority of Indians do not describe themselves as vegetarians: When asked if they are vegetarian, 61% of Indians say “no.” (While there are many ways to define “vegetarian” in India, the survey left the definition of vegetarian up to the respondent.)

Nearly four-in-ten adults in India (39%) say they do follow a vegetarian diet, including 44% of Hindus. Most Sikhs (59%) identify as vegetarians, as do an overwhelming majority of Jains (92%). Muslims (8%), Christians (10%) and Buddhists (25%) are less likely to say they are vegetarians. 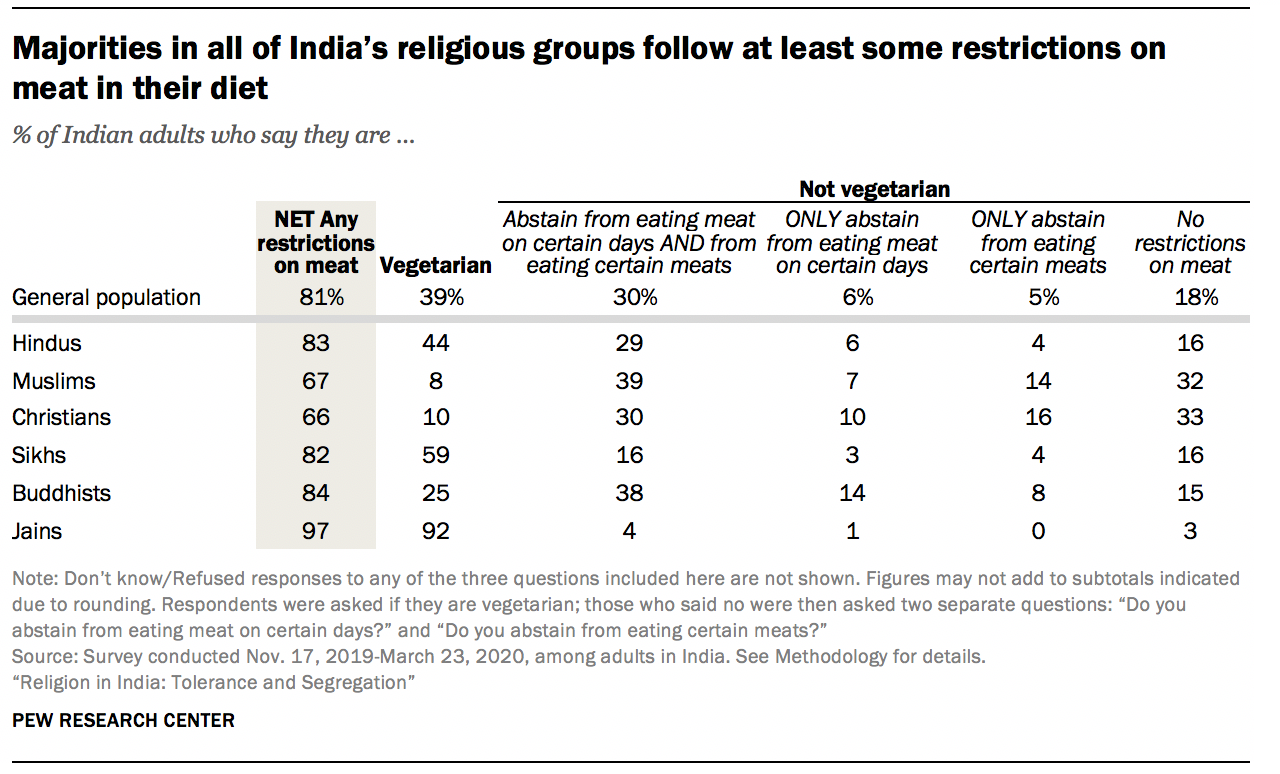 Majorities among all of India’s major religious groups say they follow at least one of these restrictions on meat in their diet. Jains nearly universally abstain from meat either fully or partially (97%). Christians and Muslims are the least likely to abide by such dietary restrictions; still, about two-thirds among these groups abstain from meat in some way, including 53% of Muslims and 46% of Christians who abstain from eating certain meats. Among Hindus, 83% say they are either vegetarians or have restrictions on what kinds of meat they eat or when.

Hindus with higher levels of religious observance are more likely to be vegetarians. Among those who say religion is very important in their lives, 46% say they are vegetarians, compared with 33% among Hindus who say religion is less important to them. A similar pattern holds with partisanship: Hindus who express a favorable view of the Bharatiya Janata Party (BJP) are more likely than others to be vegetarians (49% vs. 35%). Meanwhile, Hindu members of Scheduled Castes, Scheduled Tribes and other lower castes are less likely than General Category Hindus to say they are vegetarians (40% vs. 53%).

There is also significant regional variation among Hindus on this question: The majority of Hindus in Northern (71%), Central (61%) and Western (57%) India say they are vegetarians, while this is much rarer in the East (18%), Northeast (19%) and South (30%). Even in the regions where fewer Hindus are vegetarians, however, many do follow at least some restrictions on meat in their diet. For example, 39% of Hindus in the South say they don’t eat meat on certain days and don’t eat certain meats, while another 14% abide by just one of these two limitations. 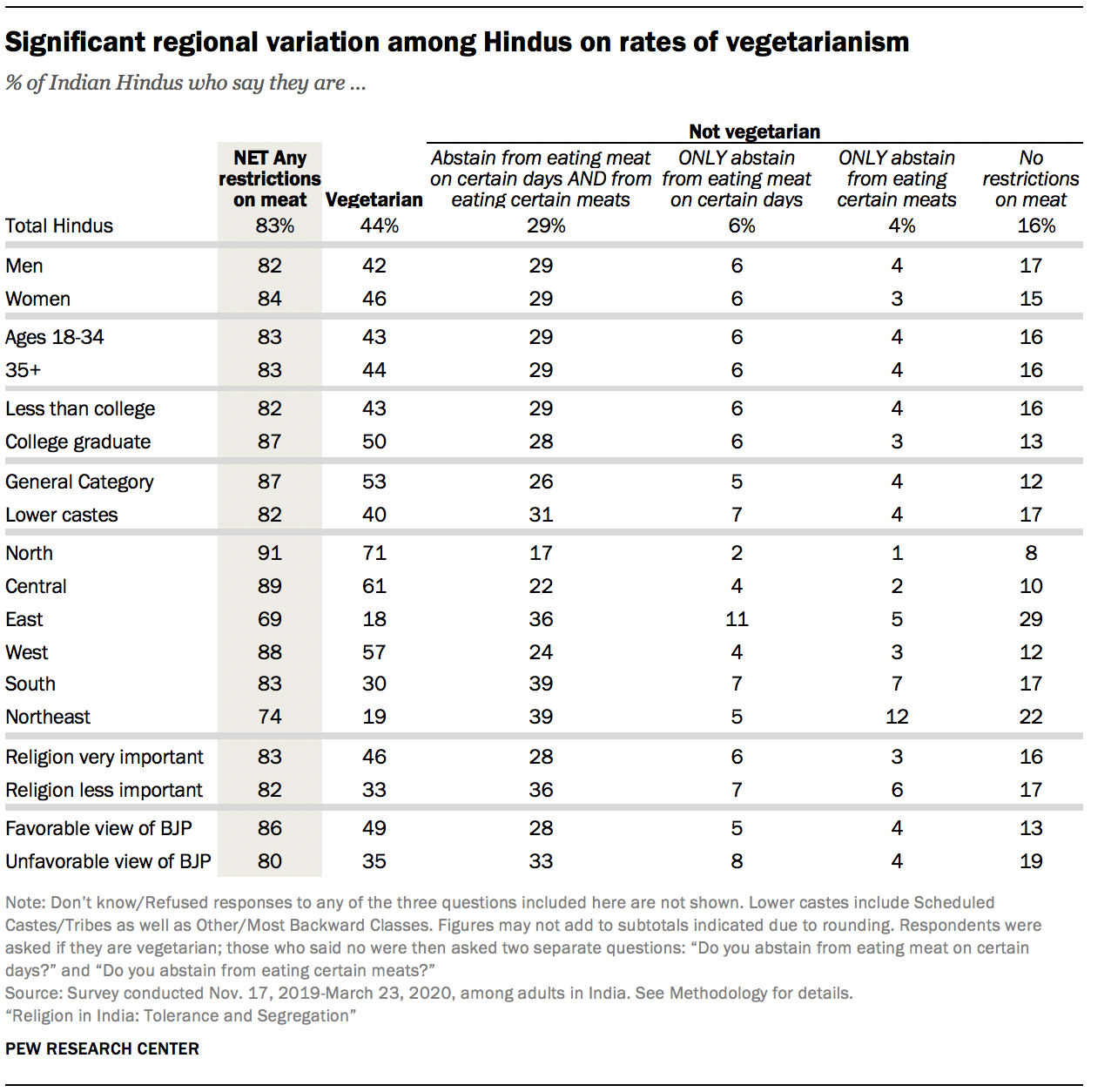 The survey asked all those who identify as vegetarians whether or not they eat root vegetables, such as garlic and onion. Jain religious teachings recommend against eating root vegetables, since pulling out a plant’s roots destroys the plant.

The survey did not include enough interviews with Jain respondents to conduct a deeper analysis of their dietary practices.

Most vegetarians in India say they would not eat food in non-vegetarian settings, though these views vary widely by religious group.

Among Hindus, vegetarians in the South are most likely to express willingness to eat in a non-vegetarian restaurant or home – around two-thirds say they would eat at a restaurant that serves meat (64%) or in the home of someone who is not vegetarian (67%). By comparison, fewer than half of Hindu vegetarians in most other regions feel similarly.

Among Hindu vegetarians, men are slightly more likely than women to say they would eat in non-vegetarian settings.

Given that different religions in India have different dietary rules, the survey asked Indian adults whether they would ever eat food in the home of someone – or at a function hosted by people – whose religion has different rules about food than their own.

Overall, Indians are evenly split on whether they would be willing to eat in each setting. Just under half of India’s Hindus say they would eat in a home (46%) or at a function (47%) where the host’s religion has different rules about food than Hinduism, and nearly identical shares of Sikhs say they would be willing to eat in the home of (45%), or at an event hosted by (47%), people whose religion has different dietary rules than Sikhism.

Only in the South do a majority of Hindus say they would be willing to eat either in the home of (66%), or at an event hosted by (67%), people whose dietary rules differ from their own.

Majority of Indians say they fast

Fasting is an important religious observance in India. Religious festivals in India are often accompanied by fasting, and many people also observe religious fasts on certain days of the week and to mark important events in their life. Most Indian adults say they fast, including nearly eight-in-ten or more Hindus (79%), Jains (84%) and Muslims (85%). Smaller majorities of Christians and Buddhists respond similarly (64% and 61%, respectively), while Sikhs have the lowest rate of fasting (28%).

The vast majority of Muslims across different educational backgrounds, age groups and regions say they fast. (Fasting during Ramadan is one of the Five Pillars of Islam.) But Muslims in the Northeast are somewhat less likely than Muslims elsewhere to say they fast (65% vs. 85% nationally).