Pastors Often Discussed Election, Pandemic and Racism in Fall of 2020

Appendix A: Congregations that share sermons online are disproportionately evangelical and have larger audiences; sermons are longer than in 2019 study

Among the congregations included in this study for which researchers were able to identify a religious tradition, 52% were evangelical Protestant; 22% were mainline Protestant; 4% were Catholic; and 1% were historically Black Protestant churches. The database also contained a small number of congregations belonging to smaller Christian groups or non-Christian religions; for more, see the table below.

In drawing the sample of congregations used in this study, the Center oversampled smaller groups such as historically Black Protestant congregations to ensure there was enough data from each group to analyze. To account for this, researchers subsequently adjusted each group to represent its original prevalence in the database – a process called weighting. The percentages presented above are weighted, which is why they do not directly align with the raw number of congregations described earlier in this report.

The congregations included in this study were also larger than congregations nationwide. Roughly half (51%) had more than 200 members, compared with 34% of all congregations nationwide that have more than 200 members, according to the 2012 National Congregations Study.4 Finally, 59% of all congregations in the database were in geographies considered “suburban” under a Pew Research Center classification scheme devised in 2019. A further 28% were rural, and 13% were urban. (The community type designations used in this report are designed to reflect Americans’ self-reported community types; about four-in-ten – 43% – of Americans say they live in a suburban area.) 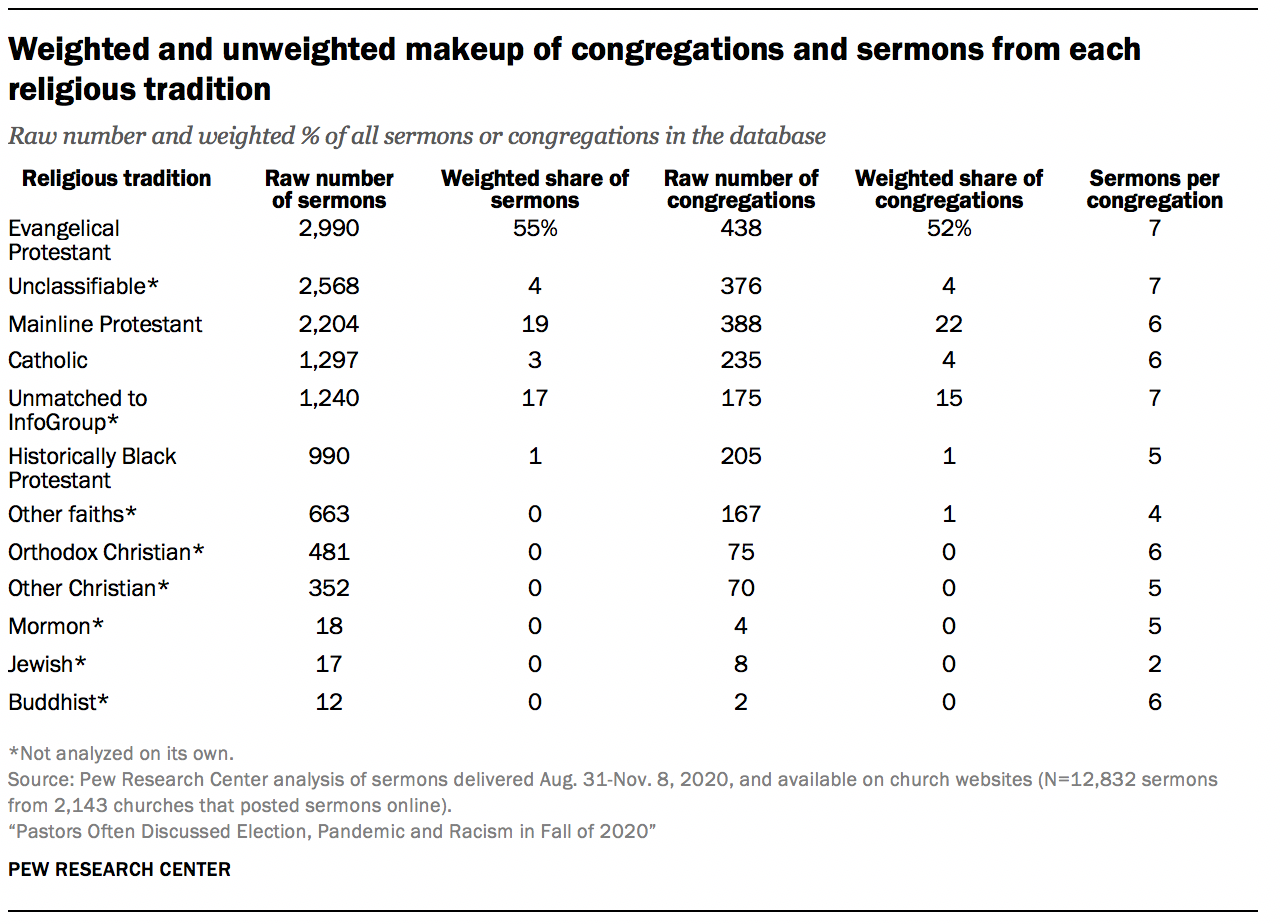 The median length of a sermon, homily or service analyzed in this study was 40 minutes, compared with 37 in the Center’s 2019 analysis of online sermons. However, this difference varied dramatically by group: Catholic messages, for example, ran a median of 27 minutes in the 2020 study period, compared with 14 minutes in 2019, and mainline Protestant messages were 36 minutes at the median in 2020, compared with 25 minutes in 2019. This suggests that many Catholic and mainline Protestant congregations were streaming full services online in the fall of 2020, rather than posting standalone sermons or homilies.

Next: Appendix B: Words or phrases most disproportionately used by clergy of each group Next Page → ← Prev Page