In 2019, 23 of the 198 countries and territories had “very high” levels of government restrictions on religion, a decrease from 26 in 2018. This is the second year in a row that the overall number of countries in the “very high” category has decreased, with the 2019 figure falling to its lowest point since 2015.

At the same time, however, the number of countries with “high” levels of government restrictions rose by four, from 30 in 2018 to 34 in 2019. Taken together, the number of countries that experienced either “high” or “very high” levels of government restrictions in 2019 increased by one to 57, matching the study’s record high from 2012. (For details about the thresholds for the “very high” and “high” categories, see Methodology.)

Five countries and territories – Mauritania, Morocco, Vietnam, Western Sahara and Yemen – moved from the “very high” into the “high” category in 2019. GRI scores for Morocco, Western Sahara and Vietnam fell by at least one whole point on the index, while Mauritania and Yemen had small decreases of less than a point.24 For example, Morocco’s GRI score dropped from 7.2 to 6.2 in part because there were no reports of the government detaining religious minorities in 2019, unlike in 2018 when authorities detained and questioned a Christian and Shiite Muslims.25

Two countries – Sudan and Kyrgyzstan – moved into the “very high” category of government restrictions in 2019. Sudan has been in either the “high” or “very high” category every year since the beginning of the study, but this is the first time Kyrgyzstan has been in the “very high” category. Kyrgyzstan reached this level in 2019 (climbing to 6.6 on the index, up from 6.5 in 2018) largely due to increased detentions of suspected Islamists, and also because of reported raids of homes where banned religious groups – such as Jehovah’s Witnesses and the Islamist group Hizb ut-Tahrir – were believed to be meeting.26 In Sudan, meanwhile, during the anti-government protests that led to the ousting of President Omar al-Bashir, government forces targeted mosques associated with the political opposition, as well as members of religious minority groups such as Shiite Muslims, who were questioned about their faith by security officials. During this time, Sudanese authorities used rubber bullets, tear gas and, in some cases, live ammunition to disperse worshippers at mosques where protests were being held; forces also beat, arrested or threatened some worshippers and protesters.27

For a complete list of all countries in each category, see the Government Restrictions Index table in Appendix A. 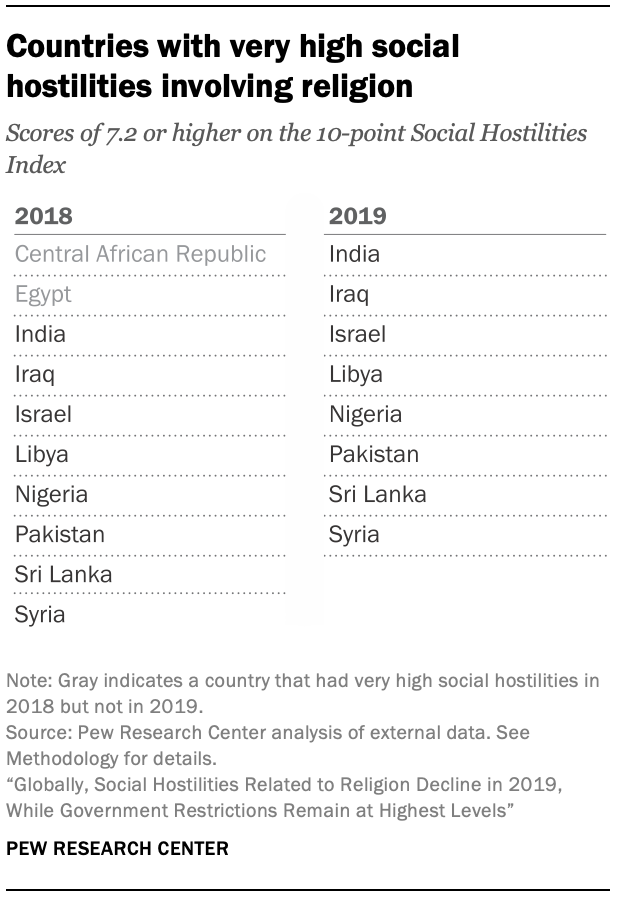 As with government restrictions on religion, social hostilities related to religion vary from country to country. The Social Hostilities Index (SHI) captures a wide range of activities, including but not limited to mob violence against religious minorities, individual assaults on people of particular faiths and incidents of terrorism carried out in the name of religion.

Far fewer countries score “very high” on the SHI than on the GRI. In 2019, eight of the 198 countries in the study had “very high” levels of social hostilities involving religion – the lowest figure in more than a decade, and two fewer than in 2018. The annual decrease reflected the movement of two countries, Egypt and the Central African Republic, from the “very high” category of the SHI in 2018 into the “high” category in 2019. Even with these two countries moving into the “high” category, the total number of countries categorized as having “high” levels of social hostilities dropped by eight, from 43 in 2018 to 35 in 2019.

For a complete list of all countries in each category, see the Social Hostilities Index table in Appendix B. 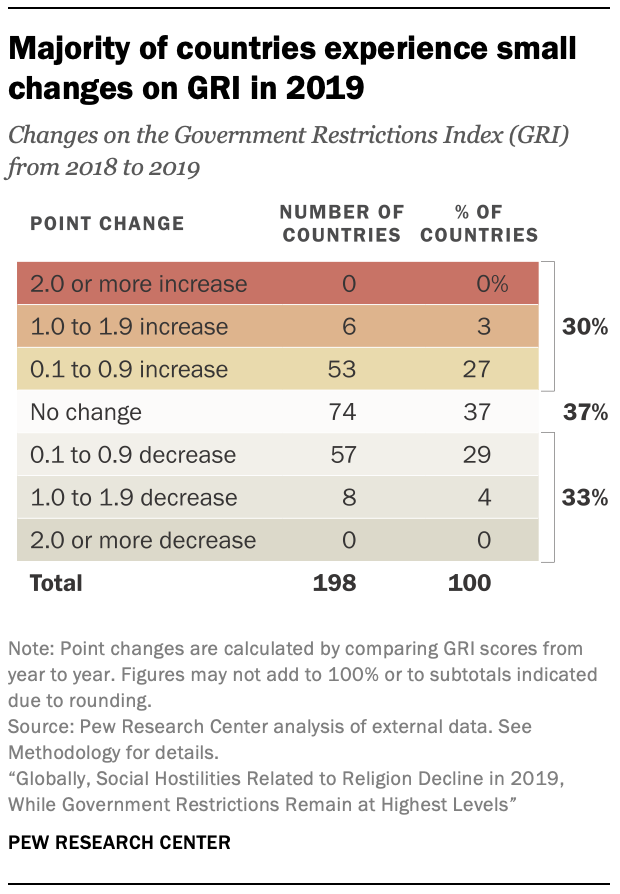 This study also tracks how each country’s index score changes from year to year for government restrictions and social hostilities.

Fourteen countries had modest changes (1.0 to 1.9 points) in their GRI scores, with eight decreases and six increases within this range. Sri Lanka experienced the biggest change in its GRI score of any country in 2019 – an increase of 1.8 points. The rise in Sri Lanka’s score reflected a slate of new restrictions imposed by the Sri Lankan government after suicide bombings targeted churches and luxury hotels on Easter Sunday, killing more than 250 people. Following the attacks, the government declared a state of emergency and temporarily banned face coverings, a move that largely impacted Muslim women and led to heightened harassment of Muslims by security forces.29 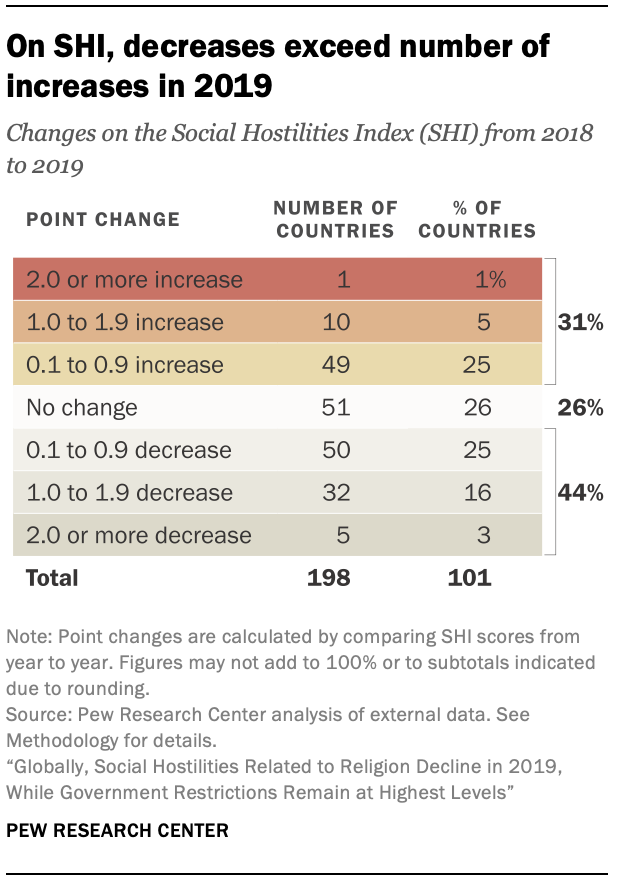 Six countries saw large changes (2.0 or more points) in their SHI scores in 2019. In five of these countries – Armenia, Greece, Kyrgyzstan, Malaysia and Romania – the scores went down. Armenia, Greece, Kyrgyzstan and Romania moved from the “high” to the “moderate” category. Malaysia remained in the “high” category even though its score fell from 6.4 in 2018 to 3.9 in 2019, shifting from near the upper bound of the “high” range toward the lower bound.

The reasons for these changes varied. In Armenia, for example, there were no reported incidents of harassment against Jehovah’s Witnesses in 2019; during the previous year, members of that group had reported to police that they were verbally abused and had their literature display carts overturned.30 And in Greece, where an anarchist group claimed responsibility for a bomb explosion outside a church that injured multiple people in 2018, no terrorist incidents related to religion were reported in 2019.31

Only one country, Burkina Faso, experienced a large increase in social hostilities in 2019, moving from the “moderate” to the “high” category on the SHI. Multiple attacks on Christians and Muslims by Islamist militant groups, including the Islamic State in Greater Sahara and al-Qaida in the Islamic Maghreb, led to several dozen deaths and exacerbated religious tensions in the West African country.32

Forty-two countries had modest changes (between 1.0 and 1.9 points) in their SHI scores, with 32 of them experiencing modest decreases and 10 experiencing modest increases. For example, in Uruguay, where the index score fell from 2.0 in 2018 to 0.8 in 2019, fewer incidents of vandalism of Christian churches were reported in 2019.33

Half the countries studied (99) experienced small changes in their SHI scores (between 0.1 and 0.9), 50 of which were decreases and 49 of which were increases. There were no changes to SHI scores in 51 countries. 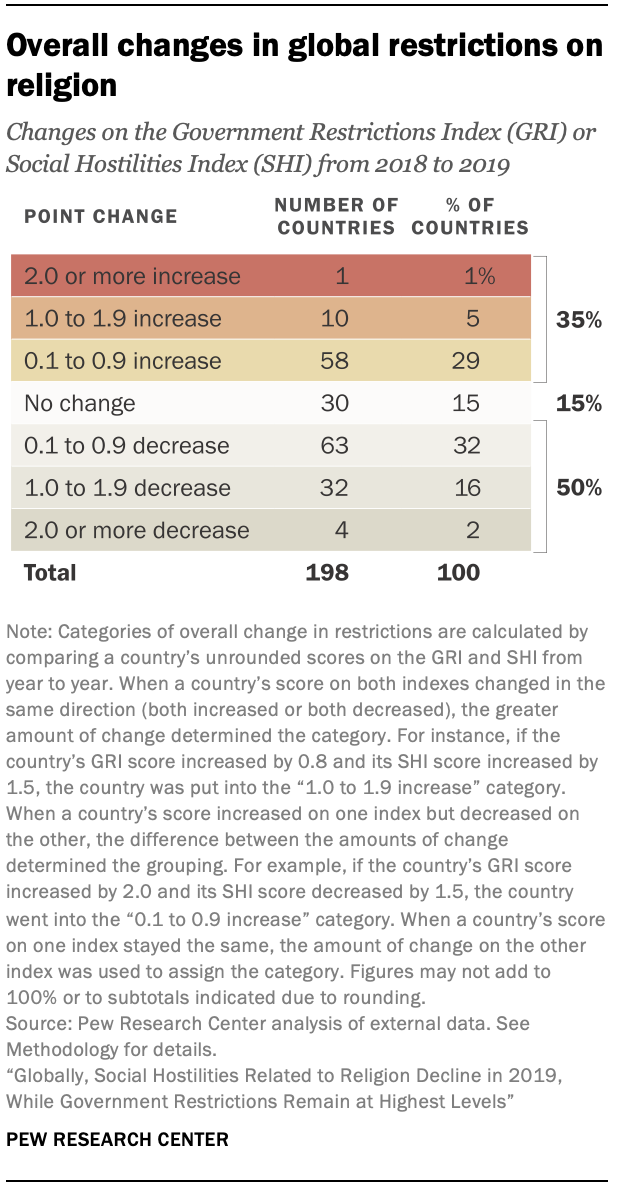 To provide a more sweeping, high-level view of how religious restrictions are changing around the world each year, Pew Research Center combines the scores on the Government Restrictions and Social Hostilities Indexes into an overall, annual score for each country. In 2019, 69 countries experienced increases in their overall scores, while 99 experienced decreases and 30 countries had no change.

Of the 69 countries with increases in their overall scores, 58 countries experienced small increases (between 0.1 and 0.9), while 10 had modest increases (1.0 to 1.9 points). Just one country, Burkina Faso, had a large increase in its overall score (2.0 or more points).

Of the 99 countries with decreases in their overall scores, 63 had small decreases (between 0.1 and 0.9), while 32 had modest decreases (1.0 to 1.9 points). Four countries – Armenia, Kyrgyzstan, Romania and Malaysia – had large decreases (2.0 points or more) in their overall scores. In Malaysia, there were no reports of mob violence against religious groups in the sources used by this study in 2019, unlike in 2018, when a group of 200 masked individuals injured at least a dozen people while attempting to forcibly remove worshippers from a Hindu temple.34 In Romania, there were no reported instances of physical assaults on Muslim women in 2019, unlike in previous years. Additionally, 2019 was the third consecutive year there were no reports of public events with anti-Semitic themes held by groups associated with the Legionnaire Movement, a far-right political party active in Romania between 1927 and 1941.35

Next: 2. Harassment of religious groups reaches new peak in 2019 Next Page → ← Prev Page