About the Religious Landscape Study

This interactive tool complements the first and second releases; the first report focuses on the changing religious composition of the U.S. and the demographic characteristics of U.S. religious groups, while the second report looks at religious beliefs and practices as well as social and political views for the U.S. adult population overall and for specific religious traditions. For example, users can: 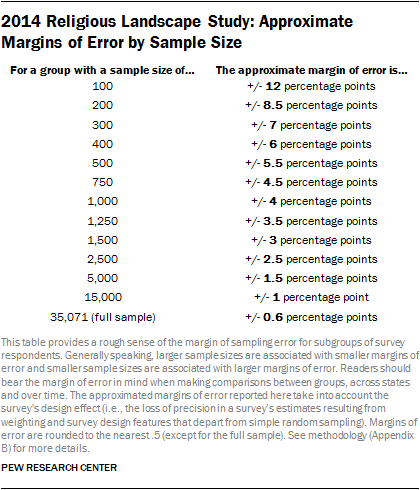 Both the 2007 and 2014 studies have margins of error of less than one percentage point for the full sample, making it possible to identify even relatively small changes in religious groups’ share of the U.S. population. But it is important to keep in mind that larger margins of error apply when looking at the characteristics of smaller groups. The accompanying table shows approximate margins of error for groups of different sizes. This interactive tool does not display results in cases where sample sizes fall below 100 respondents.

The Religious Landscape Study was made possible by The Pew Charitable Trusts, which received generous support for the project from Lilly Endowment Inc.

We welcome your feedback and suggestions. Please e-mail us.