If you are Jewish, odds are that you live in Israel or the United States. Four out of every five Jews in the world live in these two countries, with approximately 6 million Jews in each.

Pew Research Center has surveyed Jewish adults in both places, and has found deep bonds between them. Nevertheless, their experiences and perspectives are very different. For instance, we asked Jews in Israel to describe, in their own words, the biggest long-term problem facing their country. They were as likely to cite economic concerns (such as Israel’s high cost of living, or a shortage of affordable housing in Tel Aviv and other cities) as they were to mention military or national security issues (such as terror attacks or Iran’s nuclear program).

Yet when American Jews were asked to name Israel’s biggest long-term problem, fully two-thirds cited a military or security issue, and hardly any (1%) mentioned economic difficulties – which suggests that many Jews in the United States either don’t know much about Israelis’ day-to-day economic challenges or don’t worry much about them.

Israeli Jews aren’t simply Pollyannaish about their security problems. In fact, Jews in Israel are much less optimistic than Jews in the United States about the prospects for a two-state solution to the Israeli-Palestinian conflict. Fewer than half of Israeli Jews (43%) polled in 2014 and 2015 said they believe “a way can be found for Israel and an independent Palestinian state to coexist peacefully with each other,” compared with a clear majority of American Jews (61%) polled on the same question in 2013.

Like Jews in the United States, Jews in Israel are deeply divided over settlement construction in the West Bank, which Palestinians view as an obstacle to peace. Overall, however, Israeli Jews lean toward the position that settlements help Israel’s security, while a plurality of American Jews think settlements hurt Israel’s own security. Younger American Jews are especially likely to question whether Israel’s government is sincerely seeking peace and to say the United States gives “too much” support to Israel, leading some commentators to suggest that the two Jewish communities may be drifting apart.

These broad ideological differences may be connected to the very different social contexts in which Israeli and U.S. Jews live. American Jews are a highly educated and, on the whole, warmly regarded religious minority in a very large, Christian-majority country. Jews represent about 2% of the U.S. adult population of roughly 300 million people. Only about one-third of American Jews say that either “all” (5%) or “most” (27%) of their close friends are Jewish. A substantial proportion (44%) of U.S. Jews who are married say their spouse is not Jewish – including a majority of those who have gotten married since 2000.

By contrast, Jews make up about 80% of Israel’s adult population of 8 million. The vast majority of Israeli Jews say that either all (67%) or most (31%) of their close friends are Jewish, and nearly all married Jews in Israel have Jewish spouses. There’s also very little conversion between major religious groups in Israel, while in the United States, religious switching is remarkably common, including many U.S. adults who have drifted away from organized religion altogether. In our 2013 survey, one out of every five Jewish Americans said they do not identify with any religion, even though they also said they had at least one Jewish parent or were raised Jewish, and they consider themselves Jewish in other ways aside from religion (such as culturally or ethnically). In Israel, by contrast, nearly all Jews say their religion is Judaism.

Of course, not all Israeli Jews are religiously observant. Nor are they unchanging in their religious identity. Indeed, there is a fair amount of movement among different categories of Jews in Israel.

Some Israeli Jews are raised in a largely secular environment but choose to follow Jewish religious law (halakha) later in life. Such a person is known in Hebrew as a “baal teshuva,” or “one who returns.” But more Israeli Jews move in the other direction: They were raised in religious families but embrace a more secular lifestyle as adults. They are sometimes called “datlash,” short for “dati le’she’avar” (which translates as “formerly religious”).

Most American Jews are part of organized Jewish denominations or “streams,” which include the relatively large Reform and Conservative movements as well as Orthodox Judaism. In Israel, only about 5% of Jews identify as either Reform or Conservative. Instead, Jews in Israel generally place themselves into one of four informal categories of Jewish religious identity. These labels – Haredi (ultra-Orthodox), Dati (religious), Masorti (traditional) and Hiloni (secular) – are not connected to formal Jewish organizations or denominations, but instead are loose identity groups (similar, for example, to an American Christian calling herself an “evangelical” rather than a “Southern Baptist”).

Four Israelis on what being Jewish means to them

Self-described secular Jews, or Hilonim, make up about half of all Israeli Jews. Many are indeed firmly secular – a majority of Hilonim say they never pray or go to synagogue, and 44% say they do not believe in God. But, nonetheless, many Hilonim take part in Jewish rituals that are now deeply embedded in Israeli culture. For instance, nearly nine-in-ten (87%) say they attended or held a Seder last Passover. About a third of Israeli secular Jews say they keep kosher at home, and a similar share (30%) fasted all day last Yom Kippur.

Masortim (traditional Jews) are, religiously speaking, the middle ground of Israeli society – on average, they are not as observant of Jewish law as Orthodox Jews, but they are not as secular as Hilonim. They also appear to be shrinking as a share of Israeli Jews, which suggests some religious polarization may be taking place over time (meaning people are more clustered at each end of the religious spectrum, with fewer in the middle).

Two categories of Israeli Jews are what Americans might think of as Orthodox: Datiim are similar in some ways to Modern Orthodox Jews in the United States. They are highly observant of Jewish law but also strongly integrated into Israeli society (for instance, by serving in the Israeli military). Many – though by no means all – Datiim describe themselves as “religious Zionists” and hold political views that entwine religious identity and nationalism. Datiim are more likely than any other religious group in Israel to identify with the political right, to favor Jewish settlements in the West Bank and to say Arabs should be expelled or transferred from Israel. 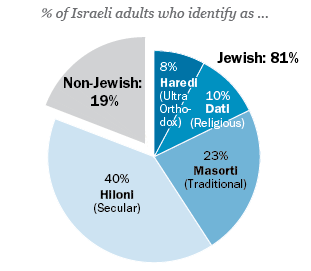 Haredim (sometimes called ultra-Orthodox Jews) are much less integrated into Israel’s broader society than are Datiim. Most do not serve in the Israeli military, and many Haredi men remain outside the workforce, instead receiving some form of subsidy from the government for religious study. Politically, Haredim have been focused primarily on the economic well-being and religious concerns of their community. Due to very high fertility rates – 28% of Haredim ages 40 and older report having had seven or more children – they are growing as a percentage of Israeli Jews and changing the dynamics of Israeli Jewish society in the process. For instance, non-Haredi Israeli politicians have proposed drafting Haredim into the military and reducing some government subsidies for Haredim as the group grows.

Together, Haredim and Datiim make up 22% of Israeli Jews – more than double the share of U.S. Jews who identify as Orthodox (10%). This is one reason Jews in Israel are, on average, more religious than American Jews.

But it is not the only reason; non-Orthodox Jews in Israel also are more likely than non-Orthodox Jews in the U.S. to keep kosher dietary laws, observe the Sabbath and fast on Yom Kippur, to name just a few traditional practices. One possible explanation: Jewish observance is more ingrained in daily life in Israel than it is in the U.S. For example, many Israeli businesses close early on Friday afternoon before the start of the Sabbath. Kosher food is more widely available than it is in the U.S., and major Jewish holidays are Israeli national holidays.

Jews in the U.S. and Israel also differ on what “being Jewish” means to them, personally. While both groups largely agree that remembering the Holocaust is vital to their Jewish identity, Americans are far more likely than Israelis to say that pursuing ethics, morality and justice in society, as well as displaying “intellectual curiosity” and having a “good sense of humor,” are essential to what being Jewish means to them. Israeli Jews, meanwhile, more commonly highlight observance of Jewish law and a connection to Jewish history, culture or community.

For two populations that live an ocean apart – both literally and metaphorically – Israeli Jews and American Jews remain remarkably close in other ways. About four-in-ten American Jews have traveled to Israel at least once (many have done so more than once), and a similar share of Israeli Jews have visited the United States.

Jewish Americans feel a strong emotional connection with the Jewish state: A solid majority say they are either “very” or “somewhat” attached to Israel and that caring about Israel is either “essential” or “important” to what being Jewish means to them. The connection is felt both ways: Most Israeli Jews say Jewish Americans have a good impact on the way things are going in Israel. In addition, most Israeli Jews say that a thriving diaspora is vital to the long-term survival of the Jewish people and that Jews in the two countries share a “common destiny.”

Jews are a people who often look back and feel pride in a long, resilient history. When Jews in both Israel and the United States look ahead, many see their counterparts in the other country – despite all their differences – as fellow passengers on the same journey.