GOP contender Donald Trump is not widely viewed as religious, even among Republicans. And the share of Americans who say Hillary Clinton is not a religious person has risen sharply since she first ran for president eight years ago.

There has been a modest drop in overall rates of belief in God and participation in religious practices. But religiously affiliated Americans are as observant as before.

Pope Francis has generated goodwill toward the Catholic Church among many Americans across the political spectrum. But Democrats and liberals are especially likely to say they have a more positive view of the Church because of Francis.

When Pope Francis arrives in the U.S., he will find a Catholic public that is remarkably accepting of a variety of non-traditional families, according to a new survey on family life, sexuality and Catholic identity.

A Portrait of American Orthodox Jews

Compared with most other Jewish Americans, Orthodox Jews on average are younger, get married earlier and have bigger families. They also tend to be more religiously observant and more socially and politically conservative.

A solid majority of U.S. Catholics believe that Earth is warming. But climate change is a highly politicized issue that sharply divides American Catholics, like the U.S. public as a whole, mainly along political party lines.

The Christian share of the U.S. population is declining, while the share of Americans who do not identify with any organized religion is growing. These changes affect all regions in the country and many demographic groups.

As of 2010, nearly a third of the world’s population identified as Christian. But if demographic trends persist, Islam will close the gap by the middle of the 21st century. 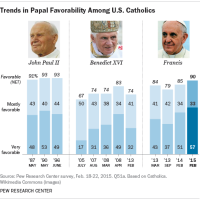 Nearly two years into his papacy, Pope Francis continues to be widely popular: Seven-in-ten Americans view him favorably, including 90% of U.S. Catholics.