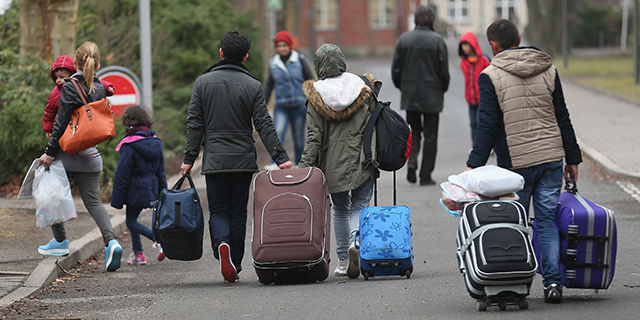 BERLIN, GERMANY – MARCH 11: People pulling suitcases arrive at the Central Registration Office for Asylum Seekers (Zentrale Aufnahmestelle fuer Fluechtlinge, or ZAA) of the State Office for Health and Social Services (Landesamt fuer Gesundheit und Soziales, or LAGeSo), which is the registration office for refugees and migrants arriving in Berlin who are seeking asylum in Germany, on March 11, 2015 in Berlin, Germany. Germany, which registered over 200,000 refugees in 2014, is expecting even more in 2015 and many cities and towns are reeling under the burden of having to accommodate them. The main countries of origin of the refugees include Syria, Serbia, Eritrea, Afghanistan, Iraq, Kosovo and Albania. (Photo by Sean Gallup/Getty Images)