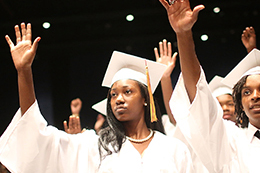 NEW ORLEANS, LA – MAY 14: McDonogh #35 Senior High School graduates stand at their commencement at the Ernest N. Morial Convention Center on May 14, 2015 in New Orleans, Louisiana. Thousands of Hurricane Katrina survivors attempted to use the convention center as a shelter of last resort in the days following the storm, yet it lacked power, water, food and medical supplies. McDonogh 35 was damaged by flooding from Hurricane Katrina and was the first high school for African-Americans in the state of Louisiana. It is one of the last remaining traditional public schools in the city. The tenth anniversary of Hurricane Katrina, which killed at least 1836 and is considered the costliest natural disaster in U.S. history, is August 29. (Photo by Mario Tama/Getty Images)