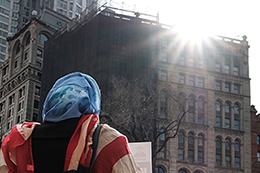 NEW YORK, NY – FEBRUARY 01: Women wear an American Flag head scarf at an event at City Hall for World Hijab Day on February 1, 2017 in New York City. The day was started five years ago when a Muslim in New York invited other women to experience what it is like to wear a hijab every day in America. The day is now celebrated in cities around the world. (Photo by Spencer Platt/Getty Images)