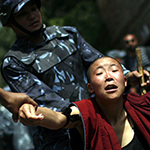 KATHMANDU, NEPAL – MARCH 30: A Tibetan Buddhist nun is forcibly detained by Nepali police during a pro-Tibetan protest outside of the Chinese consulate March 30, 2008 in Kathmandu, Nepal. According to reports, more than 130 demonstrators were detained by Nepali police who baton charged Buddhist monks, nuns and other pro-Tibet demonstrators who were trying to get past the gate of the Chinese Embassy visa office in the Nepalese capital today. (Photo by Brian Sokol/Getty Images)